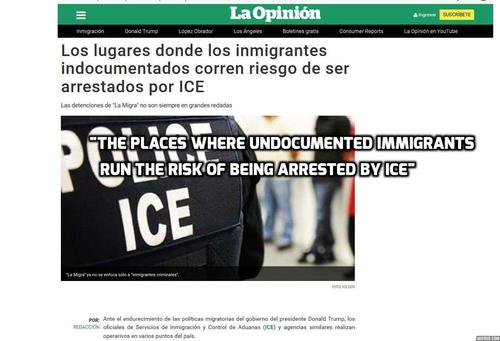 SAID IN SPANISH: La Opinión Warns Illegal-Alien Readers; The Danger of Speaking Spanish in the U.S.; Why Can’t Costa Ricans and Nicaraguans Get Along?

The idea made perfect sense. La Opinión was looking out for its illegal-alien readers, or for their friends, relatives, and employers. What better way than one of those pieces that go on the refrigerator next to Hints from Heloise!

So what places should illegals avoid? La Opinión focused on three “where any immigrant can be questioned … and where an undocumented person can be detained.”

There are other places not mentioned by the expert, [I.E. Dominguez] but documented by activists and organizations such as the ACLU, where the undocumented can run a risk. One of them is:

Interstate buses, where agents can ask for Identification.

On interstate highways, where it is reported that local officials cooperate with ICE to locate the undocumented.

The operations of “La Migra” are constant. Some are routine, as the agency calls them. ...

Then there are the major raids.

And because of all this enforcement, La Opinión warned, “legal immigrants should carry their identification.” Well, that shouldn’t be a problem.

But how about illegals who don’t have ID? “The undocumented should always have the telephone number of someone who can help them in case of being detained,” the newspaper advised.

The article ends with this gem:

The experts stress that immigrants in risk of being captured should avoid getting into trouble, which attracts the attention of authorities.

Do illegal aliens get into trouble so often they need that advice? Perhaps La Opinión knows its readership.

The Danger of Speaking Spanish in the United States

In the United States there is still distinct suspicion of the language of Cervantes, but they don’t take in to account that by 2060 Latinos will be the biggest demographic group in the country.

Actually, no one is “suspicious” of the “language of Cervantes”—a locution meant to imply we gringos just don’t understand how important Spanish is to Western Civilization. Anyone would much prefer reading Don Quixote the way the battle-scarred veteran of Lepanto wrote it: in Spanish. Why? Because any great novel loses something in the translation.

The “language of Cervantes” isn’t the problem. It’s some of the people who speak it. Cultivated Spaniards, say, like Cervantes, aren’t crossing the border illegally. Many illegals are illiterate, dangerous criminals, some of whom observe Nuestra Señora de la Santa Muerte (Our Lady Of Holy Death), like the murderous Cousins in Breaking Bad. And some illegal-alien criminals form Satanist gangs [‘You Feel That The Devil Is Helping You’: MS-13’s Satanic History, by Michael E. Miller, The Washington Post, December 20, 2017].

Note that while expressing concern about the loss of the white majority is “white supremacist,” gloating about the coming Hispanic ascendency is A-OK.

In the Thirteen colonies, which became independent from the English Empire in the northeast region of what is now the United States, the colonists, because they were subjected to the British, spoke English, but in equal measure spoke Dutch, German or French.

Britain did not conquer the colonies; it settled them. Some minorities spoke languages other than English, but hardly “in equal measure.” Read what Benjamin Franklin said about non-English cultural influence.

Then we get these historical monkeyshines:

Later they drafted the Constitution in English because it was the language most commonly spoken, but the document recognized cultural diversity in not establishing, in any of its clauses, English as the official language.

Here, we get the usual case of “presentism;” i.e., foisting modern sensibilities upon history. But at least Ocano admits that English was indeed the dominant language.

Why doesn’t the Constitution stipulate English as our official language? It wasn’t because the proponents were early Diversicrats. Rather, it wasn’t necessary. Everyone knew what our de facto official language was.

In retrospect, we might wish they had written English-only into the Constitution. Possibly something along the order of John Jay’s reminder in Federalist No. 2 of who and what we are:

Providence has been pleased to give this one connected country to one united people—a people descended from the same ancestors, speaking the same language, professing the same religion, attached to the same principles of government, very similar in their manners and customs.

Of course, only hindsight is 20-20. The Framers didn’t imagine their posterity—for whom the Constitution was drafted—would be so foolish as to invite in millions of unassimilable immigrants.

[T]he Trump administration insists in imposing anti-immigrant measures and backs the supremacist argument that “White culture” should prevail in the culture. Therefore, there are more persons reacting to incidents of racism or discrimination because of language.

The article then goes to New York lawyer Aaron Schlossberg, who suffered a Two Minutes Hate because he expects people to speak English and got pretty loud about it.

But again. Latinos should be happy. Remember by the year 2060 the Latinos will be the biggest demographic group.” And, Ocaso proclaims, they “will maintain the daily use of Spanish.”

Costa Rica, the most prosperous country in Central America besides Panama, lies south of Nicaragua. Like the U.S., Costa Rica too has a problem with immigrants—from Nicaragua.

Costa Rican authorities reported 44 detained after the disturbances this Saturday [August 18] developed in various parts of San Jose [the capital], after emotions boiled over during a demonstration against the Nicaraguan immigrants who have arrived from the neighboring country, fleeing from the Daniel Ortega regime. In the afternoon some 500 Ticos (Costa Ricans) joined together in the park La Merced shouting “¡Fuera nicas!” [Out Nicaraguans] in a demonstration that the daily CRHoy [Costa Rica Today] considered “the most xenophobic expression in the country of the last few years.”

Before you blame it all on the Costa Ricans, read on:

The gathering took place in the context of the massive migration resulting from the crisis in Nicaragua, but also due to the Costa Rican discontent after various violent acts attributed to Nicaraguan immigrants.

The Costa Rica security minister, Michael Soto, was not happy:

[He] stated in a press conference that the protest was called through social networks and behind it “were some groups,” such as “soccer bars and groups with anarchic ideologies, with Nazi leanings, who contacted their already organized elements.” Among the demonstrators, said Soto, were persons with criminal records (for various crimes against life and property) and also “persons with swastikas on their clothing and bodies.”

San Jose police “confiscated 13 knives and 8 Molotov cocktails, besides a baseball bat.” The site of the big protest, The Merced, “where historically the Nicaraguans have congregated” was “closed indefinitely and is guarded by the police.”

And, “Costa Rican authorities…reinforced migratory control on the coasts and the borders, focused on illegal immigrants.”