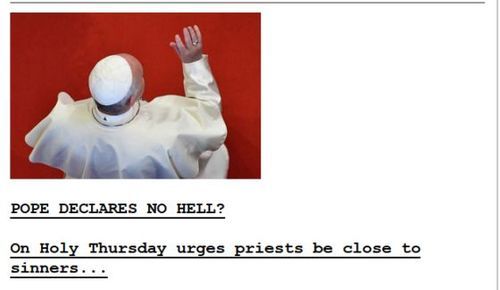 Earlier by Pat Buchanan: Does the Pope Believe in Hell?

That joking retort we heard as children, "Is the pope Catholic?" is starting to look like a serious question.

Asked five years ago about a "gay lobby" in the Vatican, Pope Francis responded, "If a person is gay and seeks God and has good will, who am I to judge?"

As judgment was thought to be part of the papal job description, traditional Catholics were startled at what the new pope had volunteered.

Now the Holy Father has apparently fleshed out what he meant.

The Vatican has not denied what Cruz relates.

What makes this remarkable is that the catechism of the Catholic Church, based on the Old and New Testament and tradition, has always taught that homosexuality is a moral disorder, a proclivity toward sexual relations that are unnatural and immoral.

The idea that God is responsible for homosexual orientations, that the pope and the Catholic Church are fine with men being attracted to one another, and that those so oriented should be happy with it, appears, on its face, to be heresy.

It implies that what Catholics regarded for centuries as moral truth was wrong, or that moral truth has evolved and must be made to conform to modernity. This is moral relativism: Truth changes with the times.

And if what Cruz reports is accurate, the pope's position is close to Hillary Clinton's.

In 2016, at a New York fundraiser, Clinton recited her infamous litany of sins common to the "basket of deplorables" backing Donald Trump.

A phobia is "an extreme or irrational fear of or aversion to something." Clinton was thus saying that those who have an aversion to homosexuality are morally or mentally sick.

Yet, up until December 1973, homosexuality itself was listed as a mental disorder by the American Psychiatric Association.

The new morality we hear from the pope and Hillary reflects a historic change in the moral thinking of the West. For the belief that homosexuality is normal and natural, and not only acceptable but even praiseworthy, has carried the day.

Legislatures and courts have written this "truth" into law. It has been discovered by the Supreme Court to be lurking in that Constitution whose authors regarded and treated homosexuality as a grave crime.

And, yet, from this historic change, questions naturally arise:

On the issue of homosexuality, have we ascended to a higher moral plateau? Or has America jettisoned the truths we believed and replaced them with the tenets of an ideology that may be politically and culturally ascendant but is rooted in nothing but baseless assertions and lies?

Consider the views of Cardinal Gerhard Muller, lately removed as Prefect of the Congregation for the Doctrine of the Faith, as to what is behind the drive to have "homophobia" regarded as a mental disorder.

"Homophobia (is) an invention and an instrument of the totalitarian dominance over the thoughts of others. The homo-movement is lacking scientific arguments, which is why it created an ideology which wants to dominate by creating its own reality."

In short, Cultural Marxists and their progressive allies have taken an ideological assertion—homosexuality is normal, natural and moral—without any historical, biological or scientific basis, and asserted it as truth, established it as law, and demanded that we accept and act upon this truth, or face the wrath of the regime.

Said Muller: "It is the Marxist pattern according to which reality does not create thinking, but thinking creates its own reality. He who does not accept this created reality is to be considered as being sick.

"It is as if one could influence an illness with the help of the police or with the help of courts. In the Soviet Union, Christians were put into psychiatric clinics. These are the methods of totalitarian regimes, of National Socialism and of Communism."

Since the Stonewall Riot of 1969, homosexual relationships have gone from being seen as indecent and immoral, to being tolerated, to being accepted, to being on the same plane as traditional marriage, to being a constitutional right.

And if you do not accept the new morality, you are a deplorable bigot. And if you act on your disbelief in the equality of homosexuality, you will be ostracized and punished.

The truths being jettisoned built the greatest civilization known to man. Will the invented truths of our new egalitarianism survive the arrival of the new barbarians? It's not looking all that good right now.