California state legislators and legislatorettes have rejected a resolution to commemorate John Wayne with John Wayne Day. White Americans can no longer commemorate a fellow white American without the approval of minorities and their handlers. A white candidate for commemoration must have a squeaky-clean record of welcoming white dispossession, or he will be sacrificed to the cult of multiculturalism and equality.

Wayne's record was gone over with a fine-tooth comb in a search for something to object to. Some racially insensitive and politically incorrect comments by Wayne from decades ago were found. State lawmakers Luis Alejo, Lorena Gonzalez, and Mike Gipson voiced their objections, and the resolution went down to defeat in the Assembly. 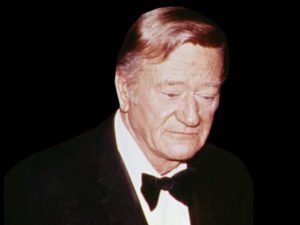 That'll teach us white Americans! What did we think we had here, a country of our own?