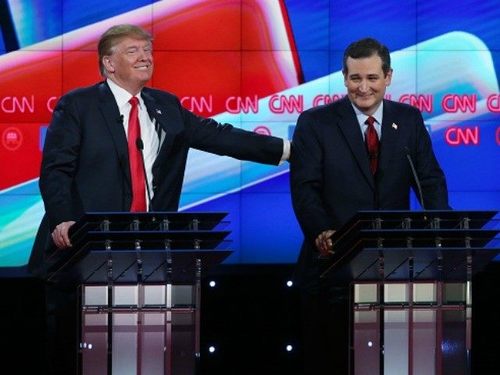 I’m reminded of what FDR’s grandfather said. He said all horse thieves are Democrats, but not all Democrats are horse thieves. In this instance, there are millions of peaceful Muslims across the world in countries like India where there is not the problems we are seeing in nations that have territories controlled by al Qaeda or ISIS, and we should direct at the problem, focus on the problem, and defeat radical Islamic terrorism. It’s not a war on faith, it’s a war on political and theocratic ideology that seeks to murder us.

So, instead of a Muslim Moratorium,

I introduced legislation in the Senate that I believe is more narrowly focused at the threat, which is radical Islamic terrorism. What my legislation would do is suspend all refugees for three years from countries where ISIS or al Qaeda control substantial territory.

Maybe Indian Muslims are, on average, less radical than in some other countries. But there are still plenty of Islamic radicals and terrorists in the country. To note a just few of the scores of Muslim terrorist attacks in India: Much of this terrorism derives from border disputes between Pakistan and India. However, many ISIS members were also originally drawn to the organization over local concerns in their home countries, but this has not stopped the organization from attacking the West.

Indian Muslims, for the most part, are very anti-ISIS, but so is Al-Qaeda. Thus just last month two Indian-American Muslims, Farooq Mohammad and Ibrahim Mohammad, were indicted for “conspiring to travel to Yemen to provide thousands of dollars to Anwar Al-Awlaki in an effort to support violent jihad against U.S. military personnel in Iraq, Afghanistan and throughout the world.” According to the Justice Department press release:

Allegations in the indictment charge that Farooq Mohammad and Ibrahim Mohammad obtained money by opening credit cards and withdrawing money with no intention of repaying the amounts obtained from the financial institutions. The indictment further alleges that on July 22, 2009, Farooq Mohammad travelled with two other people to Yemen to meet Awlaki. They were unable to meet with Awlaki, so instead travelled to Sana’a, Yemen, to meet with one of his associates. Farooq Mohammad and his two fellow travelers gave the associate approximately $22,000 to be given to Awlaki.

Anwar Al-Awlaki, for those who are not familiar, is a Yemeni cleric who was born in the United States and became Al Qaeda’s top recruiter. Among his followers was Fort Hood mass murderer Major Nidal Hassan who was also American-born.

Over and over again in Tuesday’s debate, Cruz made a point of saying that we are at war with “Radical Islam.” But “Radical Islam” has no country. Just as Hassan and Al-Awlaki are nominally “American” many nominal “Europeans” are Radical Islamists.

Stopping immigration from the worst countries is a start (and again shows the wisdom of the National Origins system adopted by the much-maligned 1924 Immigration Act). But you can’t keep “Radical Islamists” out of the U.S. by mere national origin bans. (Unless, of course, you banned immigration from all countries—an immigration moratorium).

Would a Muslim Moratorium be unfair to a non-radical Muslim from India? Perhaps—but no less unfair than Cruz’s national bar would be to, say, Syrian Christian.

And anyway, no foreigner has any right to enter the U.S. And even if Indian (or British or French etc.) Muslims are not terrorists, I don’t see too much of an upside in admitting them that makes it worth the risk.

But Ted Cruz may have a soft spot for them. During the debate, Marco Rubio accused him of supporting a “500-percent increase in the number of H-1b visas.” [Ted Cruz, the presidential candidate who wants to increase the H-1B cap by 500% By Patrick Thibodeau, Computerworld, March 23, 2015]This is true, although to Cruz’s credit, he recently reversed his position on H-1bs, and now calls for a 6 month moratorium on the program followed by much stricter admissions standards. But he is clearly following Trump’s popular stance on this issue. And when Rubio made this allegation, Cruz nodded and then only responded by emphasizing his opposition to Amnesty—emphatically not the same thing.

While Farooq and Ibrahim Mohammed weren’t H-1Bs, both entered the countries to fill those STEM jobs that Americans notoriously won’t do. As the Justice Department reported:

Farooq Mohammad was an Indian citizen who was an engineering student at Ohio State University between 2002 and 2004. In or around March 2008, he married a U.S. citizen. His brother, Ibrahim Mohammad, was also an Indian citizen who studied engineering at the University of Illinois Urbana-Champaign from 2001 through 2005. In or around 2006, he moved to Toledo, Ohio, and married a U.S. citizen. He became a lawful permanent resident of the United States in or around 2007.

And while Al Qaeda recruiter Al-Awlaki had claimed US citizenship due to the anchor-baby loophole, his parents entered this country on student visas to study engineering.

As on H-1Bs, Cruz’s Muslim immigrant stance apes Trump’s. Clearly, he anticipated the question on Trump’s Muslim moratorium. But this famed debater was apparently incapable of Googling “Islamic Terrorism in India.”

Or perhaps he still dares not cast off completely the chains of Political Correctness—unlike Trump.