On Independence Day, A Catholic Reflects On Race

Earlier by Eugene Gant: “What Will Come Of The Race War That Roils The Streets Of Baltimore?”

Main Stream Media coverage of July 4 celebrations now invariably includes U.S. citizenship ceremonies at which virtually everyone taking the oath is non-white. Of course, the Declaration of Independence does assert that “all men are created equal,” but what exactly the Founders meant must be assessed in the light of the fact that many were slaveholders—and that the 1790 Naturalization Act restricted citizenship to “free white persons.” Modern Americans don’t like to think about this because they find race a peculiarly difficult issue to contemplate—as it was for me, not least because I am a cradle Catholic.

My first exposure to equality propaganda came from the nuns at my parochial school in the 1960s, which admitted its first black students, as I recall, when I was in second grade. Catholics were big  in the Civil Rights movement. A nun told us the bad plantation owners threw slaves on fires, using them as human logs. As I’ve written before, back then, you didn’t call BS on a nun, particularly if you didn’t know whether she was telling the truth and you’re unequipped, because of your age, to view with skepticism a confident statement from a reasonable or trusted authority. And who, for an eighth-grade Catholic, is more trusted than a school sister?

Thus, although taboo thought about race began early on, I suppressed them until about 35 or 40. Hard conclusions arrived by 45. Fifty years brought submission to reality. At length, the truth will out.

The journey approximates accepting a diagnosis of terminal illness and the five stages of grief—denial, anger, bargaining, depression, acceptance—minus the bargaining. A moderately liberal friend and I used to talk much about race, and he finally concluded that blacks have lower IQs than whites, that they are more violent than any racial group and that racial equalization schemes, particularly in schools to close the “achievement gap,” are doomed. He often closed our discussions with something like this: “I hate to admit it,” or “I wish it weren’t true.”

Americans are weaned on two big lies: one, that all men, born tabula rasa, are created equal, and two, anyone can do anything he or particularly she wants, given a fair shot and committed effort. It’s hard to accept because accepting the realities about race requires assent to the unpleasant truth that an entire people will go only so far, outliers notwithstanding. That’s hard to swallow for a hopeful, optimistic, even bumptious people who put a man on the Moon.

Significantly, however, my parents and most of their white cohort suffered no illusions. They were middle- to upper-class, born a few years after World War I, and watched blacks put Baltimore to the torch in the 1960s.

When I was about 13, about the same time the nun was telling us about slave logs, my brother took a colleague to see his medical school. I went for the ride. We walked into a remedial biology class that prepared college grads for their first year of medical school. The class was all black. I recall forcing myself to push away the obvious truth my lying eyes revealed. I refused to believe the obvious: Blacks, generally, can’t handle med school. Ben Carson is almost too good to be true.

The racial hokum continued through high school and college, also Catholic, and through a secular graduate school, after which I landed a job in Conservatism, Inc. For more than a decade, I worked around the Beltway, sometimes inside it, sometimes outside it. But I was always near the Capitol Dome and affiliated with some group whose principal purpose, with the help of certain direct-mail tycoons was fleecing the Greatest Generation of their pensions and Social Security.

Toiling in the vineyards of Conservatism, Inc. taught me that cognitive dissonance has paralyzed the Right on the subject of race. Professional conservatives peddled the same equality nonsense as liberals.

But although the pro-cons behaved and spoke publicly as if they believed the races are equal, not a single conservative with whom I was close really thought so. They weren’t racial supremacists who favored Jim Crow. Far from it. They wanted blacks to have opportunity, equal rights and success. They wanted big government removed as an obstacle to free enterprise. But they did not believe, unlike Jack Kemp and his toadies, that enterprise zones and low taxes would boost black success.

They carried Kemp’s ball, chiming in when he declared himself a “liberal on race with a capital L.” They backed lower taxes, enterprise zones and disabling the federal regulatory apparatus. A rising tide lifts all boats. Capable blacks, they believed, will exploit the riches to be earned in low-tax, deregulated local and national economies. But few conservatives believed that intellectually advanced blacks abounded in anywhere near the numbers Kemp suggested in his tent-revival sermons.

Kemp’s delusions were perhaps somewhat understandable. The only blacks he knew well were college gridders when they still had to have some smarts to matriculate, and pros before the NFL became the National Felons League.  They were probably pretty good guys. Why the nightly news did not disabuse Kemp of his racial fantasy we cannot know.

Whatever the cause of Kemp’s blindness, the whites in Conservatism, Inc. never discussed the truth openly. Not that we had to. It was unspoken. When blacks were discussed, whether American blacks and crime, or South African blacks and apartheid, that unspoken truth hung in the air. Everyone knew it. The think-tankers at Heritage Foundation and Cato Institute know it. Liberals know it, too. Ted Kennedy knew it. Hubert Humphrey knew it. Joe Biden knows it.

The war between Right and Left about sanctions on South Africa occasions a few stories. Those who worked against sanctions knew the truth about South African blacks. We knew they could not maintain the advanced industrial society they were poised to seize. We predicted the chaos and wrecked economy that ensued when the Communist Nelson Mandela and his terrorist spear carriers ascended the throne.

But then again, Mandela’s socialist idiocy can’t explain everything. Why does the white socialism in leftist Seattle, Wash., or leftist Norway and Sweden, generally provide nice places to live, where black socialism in Africa, or Venezuela for that matter, destroys nearly everything? Because higher IQ whites know enough about socialism to restrain it. Lower-IQ blacks don’t. And violent black criminals, apropos of Detroit and Chicago, amplify the stultifying economic effects of liberalism.

Of course, none of us imagined, largely because of anti-racist nonsense drilled into our heads, the anti-white genocide developing in South Africa. We should have seen it coming. That aside, I don’t know one person who worked the issue who truly thought blacks could run the country the Dutch and English turned into a paradise for them.

Conservatives spoke honestly about race only rarely, and only in private among the most trusted friends. Off-color and racial jokes using the n-word evoked hearty laughter. Nonracist conservatives blurted out the n-word. Nor were Jews beyond discussion. Conservatives at a regular gathering in a Senate office on Capitol Hill, off all places, openly discussed Jewish power vis-a-vis U.S. foreign policy. At another event, as conservatives blamed the left for some big problem or another, conservative trailblazer M. Stanton Evans leaned over to Sam Francis and whispered, “It’s the Jews.” Stan was joking, but that’s precisely the point. In private, conservatives tell jokes and say things they would never utter in mixed company.

That’s a good thing, by the way. A gentleman does not give tongue to every thought that pops into his head. And even in the 1990s, the Left effectively censored conversation in the Right’s speakeasies. The first time I attended a semi-secret weekly gathering of hard rightists in Arlington, I had to ask a regular why everyone was blaming the country’s problems on “Hawaiians.” Hawaiians, I learned, were Jews.

Writing about whatever issue concerned blacks—whether tax cuts or equal opportunity or free and fair elections in savage Africa—I knew I was kidding myself. I also knew every other white conservative, despite hosannas to Alan Keyes, Myron McKee and Jay Parker, knew they were kidding themselves. I was afraid to admit that blacks in general had two problems—low IQ and high violence. To express this truth meant certain unemployment and branding with the Mark of Cain: Racist. 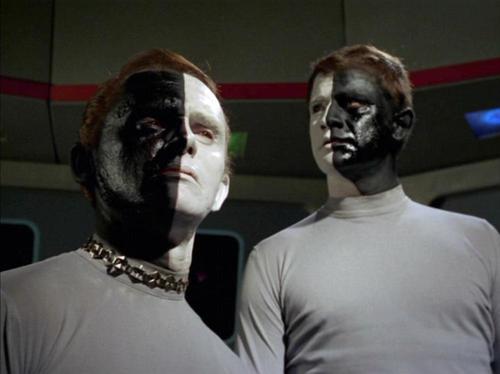 You live a lie and speak lies. It’s not unlike what Marx describes as false consciousness, except Cultural Marxists—who invented the term “racist” to enervate and undermine Western Civilization—created the imaginary world in which blacks and whites are identical except for the melanin. Like Frank Gorshin and Lou Antonio, the half-black-half-white aliens in the (in)famous episode of Star Trek.

After I left Conservatism, Inc. for a real job, I discovered the samizdat press on the web, and began reading VDARE.com and American Renaissance, which spoke frankly about racial differences and confirmed what I had always thought. Yes, I learned, IQ matters, and the testing proves it. Yes, as Pat Buchanan eloquently said, God sprinkled his talents differently and unevenly among black and white, Jew and Asian. Yes, it’s OK to believe it.

And no, the people who believe likewise do not wear white hoods, burn crosses or wish to harm blacks. The same Left that calls a conservative “anti-science” for doubting climate change and evolution denies the proven data that intelligence, athletic ability and other traits are genetically inherited. The radical left defenestrates the “settled science” on genetics to further its war against “racism,” its code for the destruction of Christian civilization.

Which raises the last point. Can a belief that groups of people are “differently abled,” to use the PC euphemism, be squared with Christian teaching?

Nothing in Church teaching that forbids drawing conclusions about groups of people from data or observations, provided those conclusions don’t lead to hatred or murderous thoughts (which is not the same as righteous anger).

The teaching of the Church is clear: All men enjoy “equal dignity” before God, but “the ‘talents’ are not distributed equally.”

The equality of men concerns their dignity as persons and the rights that flow from it. The differences among persons belong to God’s plan, who wills that we should need one another. These differences should encourage charity.

Racism, as the term is used today, is not wrong just because blacks might be denied access to the “white” water fountain or restroom, petty injustices that undermine a man’s dignity and self-worth. Racism—the real kind, not the kind that knots the cotton panties at $PLC—is wrong because it elevates race to an idol and inspires hatred, mortal sins that violate the First and Fifth commandments.

Recognizing that blacks are more violent than whites, or that trying to close the academic “achievement gap” is futile because low IQ hobbles the black intellect, is not “racism.” It is accepting reality.

Segregation may well be unjust in some cases. Yet if reasonable authorities conclude, having looked at the data on crime and inter-racial violence, that blacks and whites live better apart, segregation may well be necessary. That is not tantamount to hating blacks because of their disabilities, or suggesting the law should deny them a living, or worse, exterminate them, which would indeed be a terrible sin. Race-realism is not “racism.”

Thus, back to that unpleasant truth that no one really likes to admit and that I suppressed well into manhood: Races differ, and in a multiracial society, race matters. A lot.

Eugene Gant [email him] no longer lives in Baltimore