“Too Many Jigs In The End Zone”? A Baltimore Refugee Reflects On The Ray Rice Revolution

Sportswriter Tom Callahan opens his biography of the Baltimore Colts’ Johnny Unitas, the greatest quarterback of all time, by quoting Unitas’ complaint about a nuisance that was then in the 1990s just beginning to afflict football: “Too many jigs in the endzone,” Unitas said.[ Johnny U: The Life and Times of John Unitas p.4] Callahan was startled, thinking Unitas had used a retro racial slur. Of course, Unitas just meant the repellent, swaggering victory dances after a touchdown.

Of course, these victory dances were mostly performed by blacks (although whites now routinely copy them).

Similarly, blacks have changed the National Football League into the National Felons League. The latest criminal to be unveiled: Ray Rice, he of the elevator knock-out punch. The Baltimore Ravens cashiered the running back—but not after he was arrested for knocking his wife upside the head, and not after team and NFL officials saw the video of Rice dragging his wife from the elevator unconscious. The pink slip came only after a second video surfaced, which showed what happened before said dragging.

Amazingly, right after the NFL claimed they hadn’t seen that video, a lawman told The Associated Press that he sent it to NFL headquarters in April and that a woman there acknowledged receiving it. [AP Newsbreak: Source says Rice video sent to NFL,By Rob Maaddi, September 11, 2014]

That said, Rice (who got off the hook legally) is nothing new for the Ravens. Before Rice, there was Ray Lewis, who somehow skated on a murder charge, and the other 17 Ravens charged with 22 crimes since 2000. Four of Rice’s comrades have been charged in 2014. The Ravens’ collective rap sheet appears at the NFL Arrests Database at the San Diego Union-Tribune’s website.

But, as a (long-removed) Baltimore brat, I can testify that it wasn’t always like this.

Back in the 1960s, many a Baltimore boy spent Sundays watching the Colts dispatch one opponent after another when Unitas was running the team. These were the days before wild “jigs in the endzone,” before blacks composed nearly 70 percent of the League, and before money ruined the game and the players.

I can’t recall one of the Colts being arrested—which isn’t to say it never happened. But we kids and our fathers back then didn’t wake up to read about Unitas or running back Tom Matte beating their wives, or linebacker Mike Curtis hiring a contract killer to murder his wife (the way Carolina Panthers wide receiver Rae Carruth did) or even less serious crimes as public drunkenness or drunk driving.

Back then, we went to school with the Colts’ and Orioles’ kids. The athletes, mostly white, did not earn 400 times the salary our Dads earned. They were in our neighborhoods, at our Little League games, ate in our diners and signed autographs on Saturday mornings at the bowling alley. They owned liquor stores and restaurants and sold insurance. Others pulled shifts at Bethlehem Steel.

They were normal guys. Johnny U helped Alan Ameche,  the man who scored the winning touchdown in the 1958 championship between the Colts and New York Giants, lay a tile floor in his new row house. (Unitas, by the way, created the modern NFL in the last two minutes of that game, now known as “The Greatest Game Ever Played.”

Those idyllic days, which featured pictures like this, are no more. 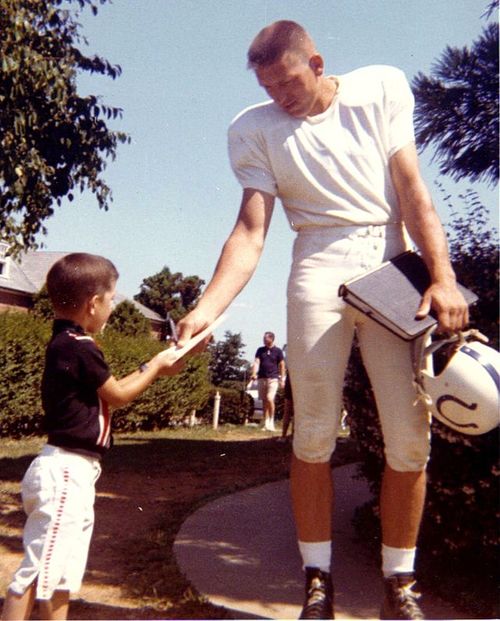 Johnny U signing autographs in 1964.

Now, we get this: 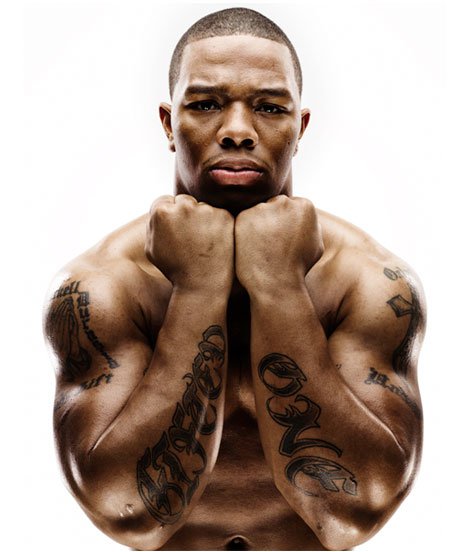 Ray Rice—those aren’t prison tattoos, he hasn’t been to prison

Unsurprisingly, we read that NFL players have been arrested 788 times since 2010, according to USA Today, while the San Diego UT lists 743 charges more serious than speeding since 2000.

In November of last year, a story in USA Today concluded that cops must be “profiling” the NFL’s blacks because they are arrested 10 times more than whites. [Black NFL players arrested nearly 10 times as often as whites, By Brent Schrotenboer, November 29, 2013]

So what if the cops are profiling? It’s good police work—if blacks actually are more criminal than whites.

How bad are the numbers?

In a league in which 66% of the players are black and 31% are white, black players were arrested nearly 10 times as often as white players (260 to 28), accounting for 88% of those NFL traffic-stop arrests.

That percentage is consistent with the overall NFL arrest numbers: Of the 687 total player arrests in the USA TODAY Sports database that spans 14 seasons, 607 involved black players — 88%, a disproportionate rate sociologists attribute to several social factors in the black population at large, including a disproportionate rate of poverty and single-parent backgrounds. Those factors also include profiling, civil rights experts and NFL players say.

The real truth, however, is this: blacks have taken over the NFL. And with their numerical majority, they now believe they can get away with murder. Black players did not behave this way 40 years ago. The whites in the NFL, including players and coaches, however liberal they were on the race question, wouldn’t have tolerated it.

And if whites get preferential treatment from the cops, they don’t get it from the league. Writing at National Review, Charles Gasparino noted the Two-Minutes Hate that Richie Incognito suffered for bullying another player his own size. (Steve Sailer has explained this by pointing out that Incognito is a lower-class white who identifies with blacks, and his ”victim” is an upper middle class half-black who before attending Harvard, went to Harvard Westlake Prep.)

Ray Rice beat up a woman half his size. Incognito, Gasparino says was “branded a thug, faced countless hours of interrogation by league officials and their lawyers, and now can’t get a job in the NFL because he was found guilty of ‘bullying’ a fellow lineman of equal size and strength.”

What did Rice get? A two-game suspension, with “no similar league inquisition, and was heralded by NFL commissioner Roger Goodell as a decent guy who made a simple ‘mistake’ when he was caught on video dragging his unconscious fiancée out of the elevator after what appeared to be a physical altercation.”

And Terrell Suggs, the Leftist Slate reports, still plays for the Ravens despite clobbering his wife before she was his wife. [Why Is Terrell Suggs Still in the NFL?,By Josh Levin, September 11, 2014]

It rather proves Gasparino’s point.

A friend of mine speculates that Rice was already on his way out, given his stats for 2013, so dumping him wasn’t a tough decision for the Ravens.

As for those who think the Ravens harmed Rice and his family by giving him the pink slip, instead of merely punishing him, that can’t be the case unless Rice, like many black athletes, has blown his gazillions. In 2013, Forbes Magazine ranked him as the 33rd highest paid athlete in professional sports. “He signed a five-year, $40 million contract the following July,” the magazine reported. “The new deal paid $17 million in 2012, $15 million of which came via a signing bonus, and Rice collected a 2013 option bonus worth $7 million in March.”

And CNN reported that Rice can keep the $25 million he has been paid thus far. [Ray Rice likely to keep $25 million, By Chris Isidore, September 9, 2014] That means he has more than enough to do nothing for the rest of his life. At a rate of $500,000 a year, he can live for 50 years without investing the money.

As well, Goodell says that Rice might be permitted to play in the future. [Goodell: I don’t rule out Ray Rice returning, By Michael David Smith, NBC, September 10, 2014]

Johnny U died 12 years ago. One wonders what he would think now.

Eugene Gant [email him]  used to live in Baltimore.