Asians Are Most Realistic About White-Black IQ Gap

Although you still encounter denialists, science has demonstrated that Americans whites average about a standard deviation higher intelligence than American blacks.

Audacious Epigone checks out the federally-funded 45-year-old General Social Survey for views on the white-black intelligence gap and finds that all major demographic groups are at least vaguely aware of this reality:

Since 2000 the GSS has asked respondents, broken down by race, if whites and if blacks “tend to be unintelligent or tend to be intelligent”, with answers on a 7-point scale, the higher the score the more intelligent the group is perceived to be. Because both questions have been paired every year they’ve been asked, the same respondents are opining on the perceived intelligence of both whites and blacks.

Every racial grouping, including blacks, perceives whites to be more intelligent than they perceive blacks to be. This holds for both men and women, liberals and conservatives, the young and the old. The differences are a matter of degree, not direction.

The following graph shows how much of an intelligence advantage whites are perceived to have over blacks by the race (and other selected characteristics) of those assessing the intelligence of each. A standard deviation is just over one point on the scale, so you'll notice that the perceived racial gap isn't as large as the fundamental law of sociology reveals it to be, but a perceived gap does indeed exist (n = 11,419): 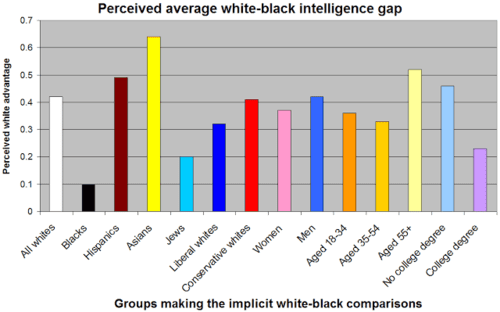 Since awareness (or, alternatively, willingness to admit awareness) is negatively correlated with time being indoctrinated in the education system, Asians are the most impressive realists. They have lots of education but less patience for the reigning dogma. Hispanics aren’t that educated so many of them, perhaps, are simply unaware of what you are supposed to say.

It would be interesting to see what the Jewish response would be if the questions asked specifically about intelligence in Jews and blacks. Do Jewish respondents understate the white-black gap because they overstate black intelligence, or do they underestimate white intelligence?