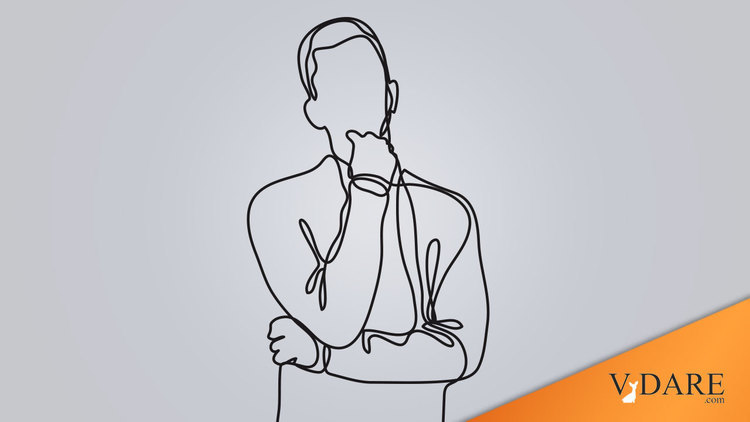 Thinking More About the Unthinkable: The White-Black IQ Gap

As I briefly mentioned last week, blogger Tacitus has been working himself up into a fine lather lately over the always-fascinating question of Steve Sailer: Evil or Vile?

My crime was to point out, based on an insight of Thomas Sowell's, that:

"Blacks tend to enjoy advantages in "real time" responsiveness—hence black strengths in running with the football, playing basketball, and in jazz, rap, dance, trash talking, preaching, and oratory. As Thomas Sowell has pointed out: 'To be an outstanding basketball player means to out-think opponents consistently in these split-second decisions under stress.'"

To which, Tacitus said:

"[N]ote, please, that blacks have a biological advantage in 'trash talking'…"

Some of my scientifically-informed readers have endeavored to educate Tacitus out of his ignorance in the comments sections of his blog. One observation was that the ensuing debate was like a scene out of Monty Python and the Holy Grail, with Tacitus playing the Black Knight who gets all four limbs sliced off, but still refuses to give in, scoffing, "Just a flesh wound!"

Rather than rehash their arguments, however, I want to review this as an example of how ideological debate in American so often goes so wrong.

What strikes me as most characteristic, and disheartening, about this exchange is that I did not say in my article that blacks necessarily have a biological advantage in improvisational skill. Tacitus suffers from the typical weakness of the ideologue. When confronted with a scientific assertion, he thinks too many steps ahead, wondering, "Is it good for the ideology?" rather than "Is it true?" Reasoning backward from the conclusion you want to avoid is no way to think scientifically.

Here's what Sowell wrote on p. 184 of Race and Culture: A World View:

"Is it a coincidence that the fields dominated by black Americans—basketball, jazz, running backs in football—all have this improvisational decision-making, with numerous factors being decided in an instant under emotional pressure? Perhaps—and perhaps not. Whether it is genetic or a cultural style is even more problematical."

From the point of view of Sowell and myself, our observations that there are areas where blacks are particularly strong are either true or not true. If true, then they are an addition to knowledge. The secondary question is whether it's all a coincidence.

Whether the cause is nature or nurture is tertiary.

But you can almost hear the gears grinding within the politically-correct noggin:

If you call attention to this common denominator underlying various black mental strengths, then you raise the possibility that the cause is that blacks are genetically superior on average at some forms of thinking. Well, that sounds politically-correct…

So, to prevent people from ever starting down this path, we must backtrack and DEMONIZE ANYBODY WHO CALLS ATTENTION TO BLACK IMPROVISATIONAL SKILLS IN THE FIRST PLACE!

The big issue of course is that African-Americans score about one standard deviation lower than American whites on an IQ tests. That means that about 5/6th of blacks score below the white median.

Tacitus says, "I am predisposed to do so [balk at the notion of systematic "differences in character and intellect"] on an ideological basis: I'm unhappy with anything denying the fundamental equality of man as an individual."

It's easy to imagine his thought processes:  how can he disprove genetic factors affect the huge average difference between blacks in whites on IQ tests? Well, if he can trash IQ tests, then he's home free.

So, out pops this pearl of a paragraph from Tacitus:

"The demonstrable differences in group-average IQs depend largely upon, as one might guess, IQ tests. In a world where it has proven nigh-impossible to devise a consistent, meaningful SAT, it is, alas, orders of magnitude more difficult to devise an objective assessment of innate intelligence. The state of the art in this field of endeavor is nothing close to perfection, and the results it yields are predictors of almost nothing. (For example, I tested with a ridiculously high IQ as a child, and I was pretty proud of that till I got to the Army and found it didn't count for anything: character, not intellect, is the measure of a man. And that's not quantifiable either.) This is not to say that the effort should not be made, nor that standardized tests of any type are useless. But they are generalizing tools, not substitutes for human judgment. We can use them as such; we should not pretend they are an objective basis for science."

Well, it would sure come as a huge surprise to the U.S. Army that IQ "didn't count for anything" and IQ tests are "predictors of almost nothing" and "we should not pretend they are an objective basis for science."

The military carefully tests all applicants for IQ. It rejects vast numbers who don't measure up. (See here for details.)

It's simply foolish to say of standardized tests: "we should not pretend they are an objective basis for science." Thousands, if not tens of thousands, of studies over the years have established what standardized tests are good for and what they are not good for. (Here's a brief summary by the American Psychological Association.)

But of course the reason for this sort of this kind of intentional nihilism is that the politically-correct work backward from the conclusion they wish to avoid.

In contrast, here's what we really do know.

These are important facts, and thus useful facts.

We may not like these facts and thus choose to make policies based on ideological assumptions about what reality ought to be. But that seldom changes reality.

Here's what we don't know at this point:

We certainly will know within, say, a couple of decades (assuming anybody funds the needed genetic research). I would suggest to anybody worried that their ideology could be falsified by this research that they probably ought to start looking for an improved ideology right now.

Sowell argues for cultural causes. Personally, I would bet on genes playing some sort of role, but I wouldn't give you 100 to 1 odds in favor, either.

But in many ways, this nature vs. nurture isn't as important as the facts that we already know. As Sowell has pointed out, this nature-nurture dispute that gets everybody so excited is academic except for the longer-term future:

"For many practical purposes, however, it makes no real difference whether poor performances in abstract thinking are due to neglect or to lack of capacity. In either case it has serious ramifications in a scientific and technological society."—Sowell, Race and Culture, p. 165.

No matter what, over the next several decades at the least, the average black will have a lower IQ than the average white.

We have only the vaguest ideas at present at how to narrow the gap. In fact, almost no research is being done on this important subject because the politically-correct have made IQ verboten.

I've suggested in VDARE.COM that there is reason to think a simple PR campaign promoting breastfeeding among black mothers might narrow the white-black IQ gap by 10% in the next generation.

But because no one can talk about IQ and race without being demonized, you won't see this discussed outside VDARE.COM.

Least of all on fashionable but foolish blogs like Tacitus.