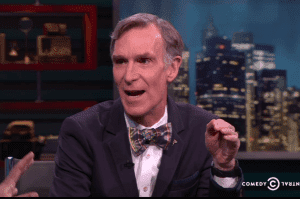 Bill Nye, the Science Guy, is the media's go-to guy when it wants to ridicule conservatives and Christians who don't buy the left-wing media’s baloney about global warming. But Nye [Email him] is also expert, apparently, in all sciences, including those or race and anthropology.

According to Salon’s summary, Nye believes “we all just migrated differently.”

Given that Nye is a domgatic evolutionist, he’ll have to explain to us anti-science rubes how, if “we all just migrated differently,” the different climates and lands to which we all migrated did not exert evolutionary pressure that accounts for differences in IQ among the myriad human tribes.