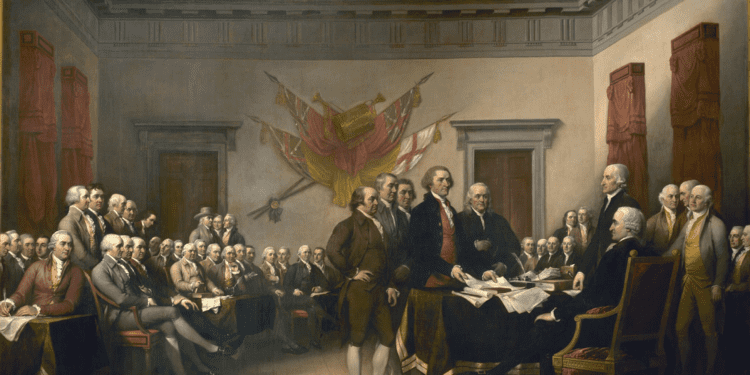 A Reader Wonders About That “Created Equal” Thing In The Declaration

Regarding Pat Buchanan's analysis of Obama’s  inaugural address (thanks, Pat, for sparing me from having to read or listen to it), I find the opening lines to the Declaration of Independence fascinating—because most if not all of those who signed it did not believe for a second that all men are created equal, especially the slaveholders who signed.

Some believe that they thought so little of slaves that they did not count them as men.  Others, like Mencken and Jefferson Davis, argue that they were stating that no one was privileged to rule another by right of birth, that George III had no natural right to be monarch of the colonists. But that seems like a stretch.

I think Thomas Jefferson might have believed what he wrote in a manner similar to how Obama interprets it today, which, if so, would be just another of the many contradictions of Jefferson.

I wonder if the real reason for starting off the Declaration that way was to gain favor from the French, and what better way to get in the good graces of the philosophes in the salons than by parroting some of their egalitarian drivel?  If I am in any way right, then it seems like we should use a Clintonian, we-only-said-that-to-get-her-into-bed, type of excuse to spare ourselves from the totalitarianism necessitated by ensuring "equality".  No two men are created equal.

James Fulford writes: My own personal view of the “created equal” in the Declaration has always been  that it was meant as a counterblast to the Divine Right of Kings, and the hereditary aristocracy of Europe.

In 2011, Steve Sailer made an interesting point, quoting the late computer pioneer John McCarthy of Stanford on “debugging” the declaration. According to Steve, McCarthy said that

If he were debugging the Declaration of Independence, he would have pointed out to Jefferson that, in pulling a couple of all-nighters, he appears to have made a typo by leaving out the word "in" in his most famous sentence. The Declaration reads:

We hold these truths to be self-evident, that all men are created equal, that they are endowed by their Creator with certain unalienable Rights, that among these are Life, Liberty and the pursuit of Happiness. —That to secure these rights, Governments are instituted among Men, deriving their just powers from the consent of the governed, —That whenever any Form of Government becomes destructive of these ends, it is the Right of the People to alter or to abolish it, and to institute new Government, laying its foundation on such principles and organizing its powers in such form, as to them shall seem most likely to effect their Safety and Happiness.

From logical and empirical standpoints, this first sentence would make a lot more sense with McCarthy's debugging:

We hold these truths to be self-evident, that all men are created equal, in that they are endowed by their Creator with certain unalienable Rights, that among these are Life, Liberty and the pursuit of Happiness. [emphasis added]

Think of how much more sensible American intellectual thought would be with that bit of proof-reading.