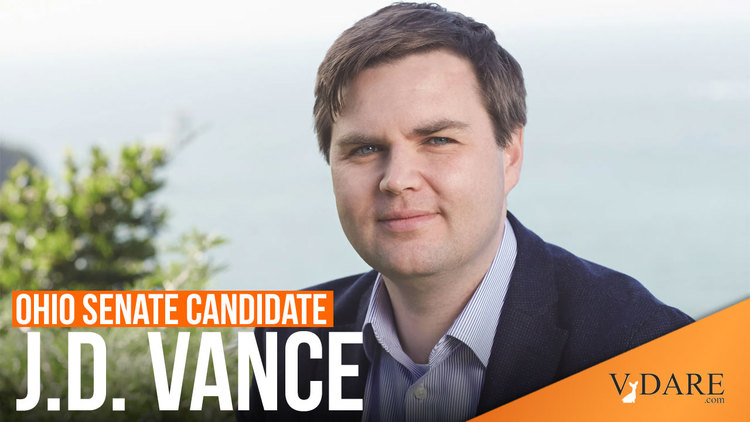 Ohio’s J.D. Vance Shows That Immigration Patriotism Is On The March

Hillbilly Elegy author J.D. Vance announced his long-anticipated U.S. Senate run in Ohio Thursday, promising to represent the forgotten working class and fight for their interests in Washington, D.C. [Middletown-born author, venture capitalist J.D. Vance announces run for US Senate, WCPO, July 1, 2021].This sets off a major battle for the open seat. Nearly every faction of the GOP is in competition: Vance aims to represent America First. He’s a non-interventionist and a market skeptic who understands the threat of mass immigration and vows to reduce it, illegal and legal, across the board. Vance does have weaknesses, but his immigration stance—and even that of his rivals—shows that the issue is emerging as key in Ohio and across the country.

Earlier this year, Vance wrote an op-ed making a powerful economic case against mass immigration, saying that it primarily benefits “the masters of the universe.” He told a story about a wealthy CEO of a hotel chain complaining about Donald J. Trump’s immigration policies that made it harder to hire cheap labor:

I've thought of this moment frequently, as our southern border has exploded into crisis. We're a year into the COVID-19 pandemic, with tens of millions of people unemployed. Countless businesses have been destroyed. Despite the enormous challenges facing America's working class, those same masters of the universe and the politicians they fund are still looking for the same thing: cheap foreign labor. No one seems to care that many migrants test positive for COVID every day and will directly compete with our struggling service sector workers.

Vance argued there is no grand motive for more immigration—it’s simply driven by money:

"[Elites] love illegal immigration for the simple reason that their livelihoods are subsidized by illegal immigration—while illegal aliens themselves are subsidized by the taxpayer. It's a redistribution scheme from the poor to the rich. More immigration means lower wages for their workers and easier access to servants for their decadent personal lives.” He mocked responses that supporting immigration restriction is racist. “It's not racist to want a secure border, higher-paying jobs for our fellow citizens and a government that doesn't allow human smugglers to earn billions of dollars on the plight of poor people."

If that sounds like Pat Buchanan, that’s because it’s meant to. Courageously, Vance actually cites Pat at 47:00 in the Facebook video of his announcement, recalling reading a book by Buchanan when Vance himself was 15 which quoted John Brown’s last words: “This is a Beautiful Country.”

Seated on his coffin in the wagon carrying him through the Virginia countryside to his place of execution, the old abolitionist John Brown was heard to say softly, "This is a beautiful country." And so it is. And that is why we must never stop trying to take her back.

Vance’s tweets show he understands the immigration  issue well. “One of the best arguments for immigration restriction is that we’re clearly unable to take care of the people already here,” he tweeted in June. “Why let in a large number of desperate newcomers when many of our biggest cities look like this?"

One of the best arguments for immigration restriction is that we’re clearly unable to take care of the people already here. Why let in a large number of desperate newcomers when many of our biggest cities look like this? https://t.co/pkgW2cSBy2

He acknowledges the harm caused by H-1b workers and says the border isn’t the only problem with immigration. The border crisis is very real. But we also have a problem with our legal immigration system. Need to fix both,” he tweeted in March.

The border crisis is very real. But we also have a problem with our legal immigration system. Need to fix both or stories like the above will keep happening.

He even defended Tucker Carlson’s discussion of the “Great Replacement” in April, saying it challenged “elite dogma.”

Tucker Carlson is the only powerful figure who consistently challenges elite dogma—on both cultural and economic questions. That is why they try to destroy him. Don’t fall for it this time, or any other.

Recently, Vance also agreed with Carlson’s attacks on the military leadership and how they have turned against the Historic American Nation.

What I find so enraging about the Joint Chiefs’s pandering on progressive wokeness is that they know damn well the geography and politics of who dies in American wars. The conservative Americans you trash are disproportionately bleeding for this country.

Vance also a strong opponent of the Tech Totalitarians. In his announcement speech, he declared ”We’re gonna go after [Big Tech]; we’re going to break up their monopolies, we’re going to make it illegal for them to steal your data & then sell it back to you” [Conservative Investor J. D. Vance Joins Ohio Senate Race, American Greatness, July 1, 2021].

However, Vance is not without his issues. He refused to vote for Trump in 2016 for cucky reasons. He instead voted for Evan McMullin. In a deleted tweet, he said: “Trump makes people I care about afraid. Immigrants, Muslims, etc. Because of this I find him reprehensible. God wants better for all of us.”

Just before Trump was inaugurated, Vance even wrote a fawning op-ed about Barack Obama. He said that Obama gave him “hope” and inspired him to achieve great things. He also complained that Republicans refused to see the good in Obama in part “(though a smaller amount than many on the left suppose)” because of “the color of his skin.” [Barack Obama and Me, by J.D. Vance, New York Times, January 2, 2017].

Additionally, Vance’s wife is the daughter of Indian immigrants and his two kids are biracial. There are Indians (and certainly Filipinos) who are American immigration patriots, but this may impact Vance’s willingness to defend the Historic American Nation.

But it does appear Vance had a genuine, if arguably pragmatic, transformation over the last four years. And, unlike most Republicans, he specifically calls out legal immigration. That stance sets him apart from his competitors in the GOP Senate primary.

Immigration is a major focus of the primary and every candidate wants to sound like Trump. But, in spite of Vance’s past, he’s the only one who sounds genuine:

Disgracefully, Twitter locked Mandel’s account in March after he tweeted a poll that asked which “illegals” would commit more crime: “Mexican Gangbangers” or “Muslim Terrorists.”

But many of these gangbangers and terrorists come to the U.S. legally. The tweet seemed dreamed up by someone who thinks this is the way to appeal to yokels [Twitter temporarily restricts Ohio Senate candidate Josh Mandel over 'hateful conduct', by Jessie Balmert, Cincinnati Enquirer, March 18, 2021].

Mandel also a wrote a column saying he would put his name as (((Josh Mandel))) on social media to protest what he called Big Tech’s anti-Semitic censorship [We must combat cancel culture, by Josh Mandel, The Blade, April 18, 2021].

Separately, Mandel’s campaign is currently in trouble because of management problems [Josh Mandel's staff quit campaign because of toxic work environment, by Laura A. Bischoff and Haley BeMiller, The Columbus Dispatch, June 29, 2021].

Significant of the immigration issue’s saliency in Ohio, Timken has released several ads about immigration that highlight the border crisis and Joe Biden’s lax enforcement. Illegal immigration appears to be a central part of her campaign. But she doesn’t say anything about legal immigration.

Moreover, Timken is a creature of the Big Business Establishment and her family has enriched themselves through outsourcing jobs [China Outsourcing from the Timken Company Complicates Jane Timken’s Senate Bid, by Matthew Boyle, Breitbart, March 24, 2021].

But it should disqualify him among immigration patriots. It hits at the problem of “unchecked illegal immigration” that hurts American workers and social programs, yet insists that America is “nation of immigrants” and a “melting pot.” Tellingly, it makes no mention of legal immigration.

Yet, in that same interview Moreno said he would be open to Amnesty and even to more immigration if the border crisis subsides and unemployment hits a certain level. Moreno also criticized how other Republicans talk about immigration, saying it comes off as anti-immigrant and “racist.”

Like Vance, Moreno was hostile to Trump in 2016 and claimed he would destroy the party. Even in 2019, Moreno emphasized he was not a Trump supporter [Ohio Republican Senate candidate running as a Trump ally once called him a 'maniac,' by Henry J. Gomez, NBC News, April 12, 2021].

The immigrant CEO may be the worst one in the race when it comes to this fundamental issue.

J.D. Vance is certainly not perfect, and his past should be taken into consideration. But my conclusion: when compared to the rest of the field, Vance is the only one who understands the threat of legal immigration. His campaign is a testament to the rising power of immigration patriotism in the GOP.

Out of all the candidates, Vance seems to be the only one to focus on the white working class. He’s also strongly positioned in the field with a $10 million war chest provided by Peter Thiel and wide name recognition [Peter Thiel is making the biggest political bet of his life, by Theodore Schleifer, Recode, March 15, 2021].

We don’t have to love J.D. Vance or forget his past cuckery.

But we should still see his campaign as a step in the right direction.