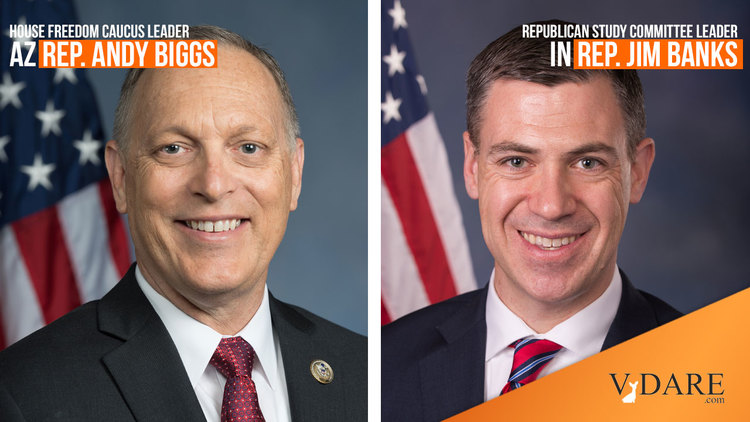 Are There America First Caucuses In Congress Already?

The America First Caucus may have died before it was even birthed, but something like it already exists in Congress. Marjorie Taylor Greene and Paul Gosar both said they gave up on the idea because they’re already members of the House Freedom Caucus [Marjorie Taylor Greene scraps planned launch of controversial 'America First' caucus amid blowback from GOP, by Daniella Diaz, CNN, April 18, 2021]. While initially a Tea Party group, the Freedom Caucus now primarily pushes an America First agenda centered on immigration. And the powerful Republican Study Committee’s (RSC) new leadership also strikes an immigration patriot tone foreign to the Business First GOP. This change is personified by the groups’ leaders, respectively Arizona Rep. Andy Biggs and Indiana Rep. Jim Banks. There’s more that can be done, but they are on the right path.

Why did the America First Caucus cause such a ruckus anyway? It allegedly echoed “white nationalist” rhetoric by daring to mention “Anglo-Saxon traditions” and warning that mass immigration threatens America’s traditional demographic makeup [White nationalist language of America First Caucus sets off new alarms on racism, by Savannah Behrmann and Phillip M. Bailey, USA TODAY, April 22, 2021]. This drew the wrath of the entire Main Stream Media and panicked Republican leaders.

But, as some liberals noticed, the views expressed by the America First Caucus are found throughout the GOP. Just last week, Pennsylvania Rep. Scott Perry and Wisconsin Sen. Ron Johnson denounced mass immigration as a Democratic tactic to alter the electorate permanently. As New Republic writer Matt Ford wrote in a piece tellingly headlined The Republican Party Is Already an “America First Caucus”—

A deeper read of the platform suggests that the America First Caucus is hardly an outlier in today’s conservative politics. Most of its policy stances reflect the prevailing orthodoxy in Republican policy circles…

Most of the caucus’ platform is an attempt to distill high-test Trumpism into an ersatz legislative agenda. . . It criticizes elites and oligarchs for undermining American schools with “left-wing interest groups,” for outsourcing American jobs to third-world countries, for importing “foreign citizens” to the U.S. “en masse,” and for undermining federalism by concentrating too much power in Washington. The platform compared Big Tech companies to Soviet dictators for denying conservatives access to their platforms and praised fracking and clean coal.

Ford concluded: “It’d be hard to find a better distillation of the post-Trump GOP than the America First Caucus’s platform.”

Of course, he’s a bit off in seeing this America First vision as shared by such swamp creatures as Kevin McCarthy. But it is largely shared by the RSC and HFC.

RSC chair Jim Banks (NumbersUSA rating A+) released an eloquent memo in late March that closely resembled the AFC’s platform, minus the references to Anglo-Saxons and demographic change. "House Republicans can broaden our electorate, increase voter turnout, and take back the House by enthusiastically rebranding and reorienting as the Party of the Working Class,” Banks wrote in the document, entitled “Cementing GOP as the Working-Class Party.”

The issue Banks thinks is essential to this task: immigration. In the memo, Banks supports eliminating illegal immigration and reducing legal immigration, stating that both ideas remain popular with working-class Americans and the general electorate. He also notes that “support for tighter immigration restrictions and support from Hispanic voters are compatible.”

Banks’ memo also urged the GOP to adopt other views the Dissident Right would approve, such as anti-Wokeness and support for government solutions to Big Tech censorship [Banks Memo: GOP Must Embrace Being ‘Party of the Working Class’ to Take Back House in Midterms, by Ashley Oliver, Breitbart, March 31, 2021].

Similarly, Banks’ RSC issued on April 12 an entire memo dedicated to immigration. It outlined the talking points the party should use to attack Joe Biden’s immigration agenda. “The Biden Immigration Agenda sacrifices the interests of the American People in order to serve the interests of foreign citizens, criminal cartels, and ultra-wealthy multinational corporations,” Banks wrote in the second memo. He outlined four ways to sell an America First immigration agenda to the public.

This pitch sounds remarkably like the America First Caucus. But it was issued by a caucus that counts over 150 GOP representatives as members. What Banks says carries weight with the entire GOP House.

House Freedom Caucus chairman Andy Biggs (A+ NumbersUSA rating) hasn’t issued any grand memos, but he has stayed laser-focused on immigration. He and his caucus have issued letters, drafted legislation, and held press conferences on the issue [Rep. Andy Biggs to introduce bill to close immigration loopholes, by Morgan Phillips and Adam Shaw, Fox News, March 16, 2021].

Biggs and his fellow HFC members are also creatively using procedural rules to make the House move at a snail’s pace in order to derail the Democrats’ agenda. They force votes on every bill, regardless of its importance or controversiality. This drives Democrats and the GOP Establishment nuts. The Uniparty just wants business to carry on as usual and compromise. But the Freedom Caucus wants to shut down the whole thing altogether, true to their image as dedicated bomb throwers [Conservative rebellion boils over in House, by Melanie Zanona et al., Politico, March 17, 2021].

This strategy has yet to significantly delay the Democrats’ immigration bills, but that fault probably lies with the majority of the GOP caucus not standing with its diehard minority.

The Freedom Caucus was also instrumental in killing bad immigration legislation in the Trump years, such as a noxious DACA deal [Congress failed to do something on immigration—again. Here’s why, by Tara Golshen, Vox, July 2, 2018]. They carry tremendous weight, despite only counting 49 members.

Significantly, the Freedom Caucus has experienced quite the change over its lifetime. It was formed in 2015 as a Tea Party offshoot of the RSC. Its members preferred Ted Cruz over Donald Trump in the 2016 primaries [Ted Cruz’s Washington friends: The House Freedom Caucus, by Tal Kopan, CNN, February 26, 2016]. Yet, during Trump’s administration, the caucus became the then-president’s most trusted allies in Congress. And under Biggs’ watch (he assumed leadership in 2019), the caucus has focused more on tech censorship, immigration, and other America First issues more than typical Tea Party concerns.

The problem with the HFC: it lacks the vision expressed by the AFC platform and Banks’s RSC memo. It knows more what it opposes than what it supports [Freedom Caucus frets over how far to push its rebellion, by Olivia Beavers and Melanie Zanona, Politico, March 30, 2021].

But Biggs is noticeably better than Banks in at least one regard: he doesn’t condemn his own side. Biggs was one of Marjorie Taylor Greene’s biggest defenders when Democrats stripped her of her committee assignments. Biggs didn’t condemn the Capitol protesters and even suggests that agent provocateurs existed among them [Rep. Andy Biggs lashes out at left, media over Capitol riot allegations, by Ronald J. Hansen, Arizona Republic, January 23, 2021]. And he stood by Paul Gosar over the spurious “white nationalist” smears of the Arizona congressman [Why are no Republicans condemning Rep. Paul Gosar for cozying up to white nationalists?, by Laurie Roberts, Arizona Republic, March 1, 2021].

Banks, unfortunately, is entirely another matter. He voted to keep Greene’s committee assignments, but recently criticized her actions for accomplishing “nothing except for giving her attention” [Marjorie Taylor Greene Scorned By Republicans She Accused Of Working To ‘Destroy America’, by Andrew Solender, Forbes, March 10, 2021]. He called the Capitol protesters “despicable” and that they “should be put behind bars for a long time” [Congressman Jim Banks reacts to local protest, by Vince Lovergine, WPTA, January 7, 2021] And he condemned Gosar for attending Nick Fuentes’s AFPAC event in February. “From what I understand of what AFPAC is and what it stands for, it is unbecoming of a member of Congress to speak or attend the conference,” he told Politico [GOP grapples with extremist episodes among its own, by Melanie Zanona and Olivia Beavers, Politico, March 4, 2021].

Banks may write a good memo, but he appears to lack the stones to stand up for allies under attack.

Banks also had very different views on immigration in 2017. Here’s what he told The Atlantic at the time:

[H]e didn’t like Trump’s rhetoric, and that this region would need an influx of immigrants to remain economically viable. He talked about an interpreter he worked with in Afghanistan, who risked his life for American troops but hasn’t been able to get a visa to come to the U.S. “That’s a small part of the immigration debate, but for me, it embodied those who are willing to do extraordinary things to have a shot at the American dream, and we make it so difficult,” he said.

In contrast, the Freedom Caucus’ Biggs has a different history. He’s long been committed to immigration patriotism.

As a state senator, he was a lead sponsor of Arizona’s famous SB1070 bill that cracked down on illegal immigration.

Banks’s memo offers a good roadmap for GOP success, but he himself seems to lack the pugilist spirit to spearhead a national populist movement. He is no Trump—nor is he even an Andy Biggs.

The ideal GOP caucus would combine Banks’s memo with Biggs’s activism. It would pair a grand vision with the courage to stand up to leadership and make the Democratic-controlled Congress grind to a halt. It would know what it supported and what it opposed. It would stand up for its members under attack rather than denounce them to the media. And it would be unafraid to discuss demographic change and the Historic American Nation.

We wait for such a caucus to emerge. But, in the meantime, the House Freedom Caucus and Republican Study Committee represent definite progress since the nightmare years of the Bush Blight.