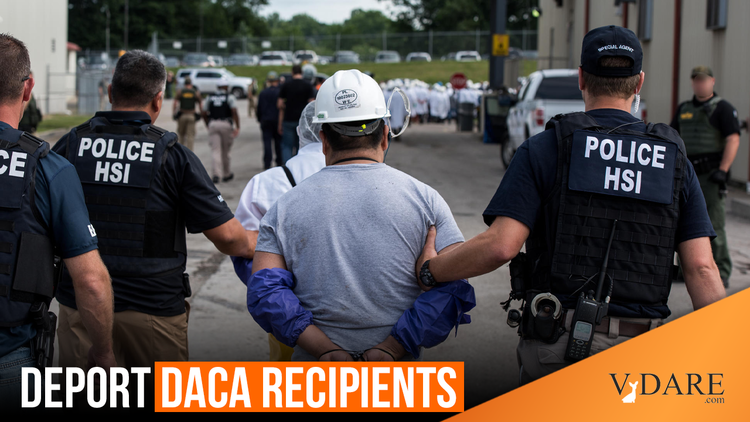 It appears that big business is not interested in investing training and recruiting resources in illegal aliens who are recipients of the Deferred Action For Childhood Arrivals (DACA) Administrative Amnesty.  Now, this appears to be for only white-collar positions: Most big employers are using labor contractors or corrupt wink-and-a-nudge human resources employees to fill out unskilled blue-collar positions.  Meat packing, non-union manufacturing, hotel chains, and restaurants chains are notorious for this caste system.  White-collar employees are considered to be permanent or long-term employees with needed training and skill-sets that cannot just come off the street.  However, line employees are replaceable and therefore those that are short-timers, have obviously fraudulent identity documents, or are supplied by contractors just aren’t of concern to corporate headquarters.

So, therefore, if you’re a DACA illegal, you are not someone that management wants in a long-term position.

What he heard excited him, said Mr. Rodriguez, a Venezuelan immigrant who was studying business at Florida International University. The company valued diversity. It aimed to hire interns as full-time employees after they graduated. But when he applied, one question on the form stumped him: “Are you currently a U.S. citizen or national, OR an alien lawfully admitted for permanent residence, OR a refugee, OR an individual granted asylum?”

He was none of these things. He informed the company that he was a beneficiary of the Deferred Action for Childhood Arrivals program, or DACA, under which he and thousands of other young immigrants have permission to work legally in the country.

Before his qualifications were even considered, he received a rejection letter.

“It was like a punch in the stomach,” Mr. Rodriguez, who is now 37, said of the experience in 2013 that undermined everything he understood about his status in the United States.

Wow, a 37-year-old who is considered a child and is surprised that the illegal scheme that got him employment authorization isn’t a priority for Corporate America.  DACA was always nonsense, just another way around the legal limits on immigration, but despite the Slave Power desire for cheap labor, they don’t want short-term employees in management.  They want skilled, loyal, and long-term employees in the management and professional ranks.  Someone who might not be around in a year or two just does not cut it.

Not surprisingly, while the NYT wants to puff up the DACA illegals as employees, only non-profits and those employers associated with immigrants and non-English speakers could be found with any enthusiasm for the soon-to-be-deported.

Alivio Medical Center, located in an immigrant enclave of Chicago, employs doctors, nurse practitioners and physician assistants who have employment eligibility through DACA, aware that they are “potentially deportable,” said Esther Corpuz, its chief executive.

The NYT reporter, Miriam Jordan, gives the reader some strange editorializing about Hispanic bodies, or “hot properties” as Jordan calls them.

He currently works at Lincoln Property, one of the country’s largest real estate management companies. In Miami, one of the most diverse cities in the country with a booming population of Spanish-speaking immigrants, Mr. Rodriguez himself is a hot property.

Despite this, the Slave Power sees DACA as ending. Too bad President Trump did not end it sooner, or take action after the betrayal by John Roberts.