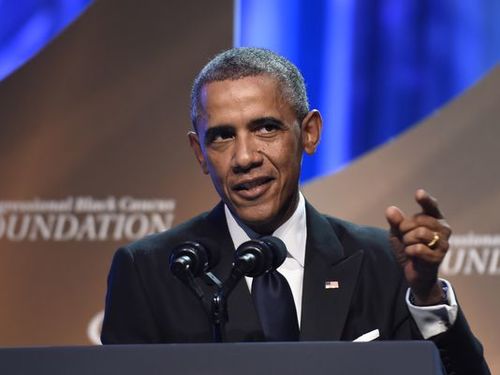 In his U.N. address, President Obama listed a parade of horrors afflicting our world: "Russian aggression in Europe," "terrorism in Syria and Iraq," rapes and beheadings by ISIL, al-Qaida, Boko Haram.

And, of course, the Ferguson Police Department.

That's right. The president could not speak of war, terrorism and genocide without dragging in the incident in a St. Louis suburb where a white cop shot and killed a black teenager:

"In a summer marked by instability in the Middle East and Eastern Europe, the world also took notice of the small American city of Ferguson, Missouri-where a young man was killed, and a community was divided."

What, other than its racial aspect, can explain why Obama is so hung up on Ferguson? At the Congressional Black Caucus dinner Saturday, he was back stoking the embers.

"Too many young men of color feel targeted by law enforcement, guilty of walking while black or driving while black-judged by stereotypes that fuel fear and resentment and hopelessness."

Obama is here implying that Michael Brown was profiled, judged "guilty of walking while black," when shot and killed.

But that is false, and Barack Obama knows it is false.

Brown had just knocked over a convenience store after collaring the clerk and was walking in the middle of the main street in Ferguson, blocking traffic, when officer Darren Wilson confronted him.

Did Wilson shoot Brown in a racist rage? Or did Wilson, face battered and eye socket smashed in a fight with the 290-pound, 6'4" Brown, empty his gun in self-defense?

We do not know. And neither does Barack Obama.

For weeks, a grand jury in St. Louis County has been hearing testimony, trying to sort it out. But by implying the shooting was done for racial reasons, that Brown may have been "targeted" for "walking while black," Obama is stoking the fires of racial resentment.

Why is he parroting a party line about America that he knows is more myth than truth? White cops are not the great lurking danger, nor the leading cause of violent death, of black teenagers and men.

That role is fulfilled by other black teenagers and other black men. And the statistics on the ugliest forms of racial violence in America-interracial assaults, rapes, murders-reveal that such crimes are overwhelmingly black-on-white.

Obama said that "young men of color" are too often "judged by stereotypes." But behind those stereotypes are FBI statistics that show that black males between 16 and 36, two percent of the U.S. population, commit a vastly disproportionate share of all violent crimes.

Where are the stats to sustain Obama's stereotype of cops?

And what did the Ferguson police do to deserve to be invoked as exemplars of what is wrong with law enforcement in America, while the Ferguson protesters get a presidential pass?

Since Michael Brown was shot in early August, rocks and Molotov cocktails have been thrown at Ferguson cops, stores have been looted and smashed, police have been cursed and threatened, and a mob tried to shut down I-70 at rush hour.

And what are the outrages perpetrated by Ferguson's cops?

After a riot in Ferguson, the next night St. Louis County cops showed up in riot gear, helmets and body armor, with an MRAP.

Now some Ferguson cops are wearing wristbands reading, "I am Darren Wilson," to show solidarity with their fellow cop who is in hiding for fear of his life.

This set off Eric Holder's minions in the civil rights division at Justice, whence one Christy Lopez fired off a letter to the Ferguson police chief saying the bracelets "upset and agitated people."

Last week, Ferguson Police Chief Thomas Jackson released a video, apologizing to Brown's parents for their son's death, and for not moving the teenager's body from the street for four hours.

Unartful, perhaps, yet it seemed sincere.

The response: The Ferguson mob cursed the chief and Brown's father brushed him off saying, "an apology would be when Darren Wilson has handcuffs, [is] processed, and charged with murder."

Understandably, this is what Michael Brown's father wants. And this is what the protesters demand. But that is not the way the law works in America, where crowds get the indictments and convictions they demand under a threat of civil disobedience or violence.

Saturday night, a Ferguson cop was shot in an incident unrelated to August. But Chief Jackson and State Highway Patrol Capt. Ron Johnson have told the Washington Post their officers have been repeatedly threatened and, since August, have come under gunfire.

If a St. Louis officer is wounded or killed in revenge for Brown, President Obama will deserve a full share of the moral responsibility.

It is time he started acting like a president of all the people, and dropped this role of outside agitator.