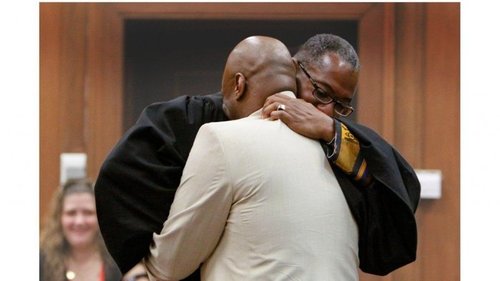 The riots in Baltimore are already being used as yet another rationale to prevent laws from being enforced against African-Americans. Not coincidentally, our first black President has already gotten ahead of the curve by commuting the sentences of mostly non-white criminal offenders—most recently 18 out of 22 prisoners on March 31st. [Obama commutes sentences of 22 people in federal prison, By Darlene Superville, Associated Press, March 31, 2015]

These favored multicultural prisoners were Black or Hispanic drug distributors. Two white pushers were similarly so favored; two others were racially indeterminate, possibly Black. And normally only by searching the records of the Bureau of Prisons is it possible to see how skewed Obama’s actions were towards members of his own race. (For readers investigating cases of MSM “not reporting race”, the technique is to find the state “inmate locator” website for any prisoner of known name but unknown race—the Bureau of Prisons never considers race “irrelevant”.) However, a website called “The Clemency Report”, which considers the release of blacks beneficial, has done this, and their score is “Race: 16 African American, 6 white, including 5 who are of Hispanic origin.”. [Obama 22 sentence commutations focus on crack + black, April 2, 2015]

This favoritism is no fluke. Obama issued a smaller batch of commutations on December 17th 2014. Of the eight prisoners in that case, all were Black drug dealers but one White and one American Indian. You can search in vain among them for poor misunderstood people unwittingly swept up in a cruel system.

This has to be viewed in context. President Obama and former Attorney General Eric Holder are openly dedicated to prison sentencing reform, especially because of its perceived bias against non-whites. The President allies with so-called reformers who cite both the relatively large American prison population and the large percentage of Blacks and Hispanics within that population—as though those numbers in and of themselves prove something. (Concerning which, see Keep locking ’em up, by Charles Murray, AEI, December 29, 2011.)

The President is not shy about his desire to undo “injustices” done to minor offenders and to release from prison these apparently harmless simpletons trapped by the white man’s evil system.

To this end he has speeded up the commutation process by which “non-violent” convicts with at least ten years behind bars can apply for, and be granted shortened sentences.

What this means in real terms is that the President of the United States has instituted a Get Out Of Jail Free scam for non-whites.

How is this executed? The Office of the Pardon Attorney, United States Department of Justice, handles commutations and pardons. Since the Clinton-era Marc Rich scandal, the office was charged with keeping at least the appearance of professionalism by keeping the granting of pardons and commutations at one remove from the White House itself.

From 2008 until April 2014, the top post was filled by Ronald Rogers (right) a former military judge and Federal Prosecutor. Amid what looks like a cooked up controversy, Rogers was eventually shunted aside. He was accused of not sharing what others said was important information concerning a candidate for parole.

[Pardon attorney steps down as part of drug-offender clemency push, By Liz Goodwin, April 23, 2014] By this standard, anyone in any capacity can be found wanting, depending on what information their enemies deem important.

On April 23rd, 2014, after the President was safely into his second term, a new Pardon Attorney was appointed to accompany the announcement of a new initiative to speed up Pardons and Commutations. The new Attorney: Deborah Leff (right) a career government lawyer and Left wing activist.

Who is Deborah Leff? She is a longtime associate of all things Chicago and Obama. Unlike the professional prosecutor she replaced, she made a career out of leveraging hard Left activism with her own steady advancement. She went directly from law school into government service, serving with the Department of Justice’s Division of Civil Rights.

She is not just a typical Left-leaning government lawyer. She is the real deal, an Obama-connected comrade who emerged from the same scene of extreme Leftism, Black Nationalism and corrupt deal-making that characterizes the Chicago political scene both in the 90s and today.

She served then as the President of the Joyce Foundation, an educational and anti-gun group. Obama served on the board. It was while she was President that the board funded the notorious Annenberg Challenge, which provided the financial backing for terrorist Bill Ayers to reform Chicago education.

According to the Jewish Press: “Leff told The New York Times in 2008 that she was the one who first suggested that Obama become Annenberg Challenge’s board chairman.” Leff is also tied to “Bernadine Dorm, a co-founder of the (Weather Underground) terrorist group.”

“Also financed by Leff’s foundation is the Herndon Alliance, a marketing outfit that was the driving force in branding Obamacare.”

“An extensive review of the grants made by a major progressive foundation run by Leff also found financing to the Marxist-oriented Sojourners, an activist group that claims to espouse Christian social justice, and funding to a group run by radical Van Jones, President Obama’s former “green” jobs czar.”

Valerie Jarrett, counselor to the President, was also on Joyce’s board, it’s mentioned in her transition bio.

It is impossible to see all these Obama fan club names and conclude that Leff as an impartial public servant. Her goal from the start is the de-incarceration of blacks as an affirmation of Cultural Marxist revolutionary principles. Leff, when not in government, is seeking to overthrow the government, all with other people’s money.

How does all this deinstitutionalization work? The Justice Department actually encourages inmates in the Federal Prison system to apply for clemency. To this end, the DOJ announced a new initiative prioritizing clemency applications around new criteria. And just to hurry things along,

The Office of the Pardon Attorney is working in conjunction with the Federal Bureau of Prisons and in addition, the newly formed clemency project 2014 (a non-governmental affiliated organization composed of the American Civil Liberties Union, the National Association of Criminal Defense Lawyers, the Families Against Mandatory Minimums, as well as individuals active within those organizations and other lawyers participating in this volunteer effort.

So, as she did in Chicago, Leff is working with Leftists outside the government to “help” the government render justice. And those in need just happen to be black felons.

If this were just a small part of the Obama Administration’s pro-black race fixation it would be a sideshow. Unfortunately, the Obama Justice Department has identified another 23,000 potential felons meeting their criteria for possible release. [Obama administration readies for non-violent inmates clemency push, Dan Roberts, The Guardian, April 23, 2014 ]

As Obama’s last days in office approach, things are looking better and better for those 23,000.

And that’s not so good for the rest of us. We are the ones who will have to cope with a wave of black dope dealers that Obama might release into our midst.