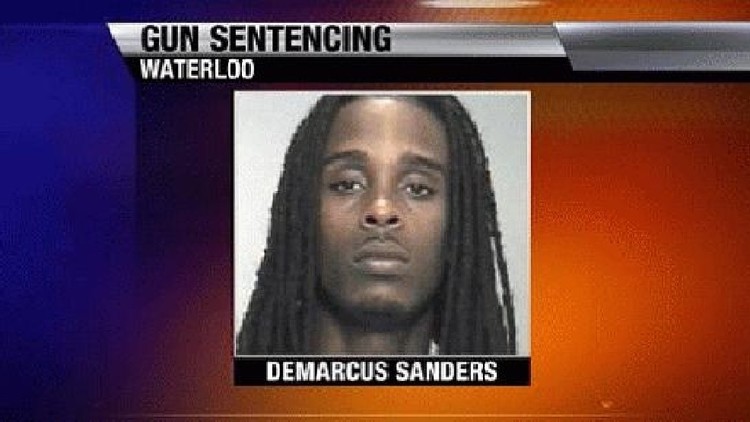 VDARE.com Note: The picture above was taken after this was published, and added later. Mr. Sanders rather predictably reoffended. [Sentencing in Drug Bust Gun Discovery, CBS2Iowa, February 26th 2015]

With the Obama administration’s decision to allow states to legalize drugs,  Eric Holder’s efforts to avoid minimum sentences for non-violent drug offenders and New York’s stop and frisk law in the hot seat, the persistent claims that the war on drugs targets minorities have increased. In June, the ACLU published a study entitled The War on Marijuana in Black and White. [ June,  2013 PDF] Everyone from the New York Times [Blacks Are Singled Out for Marijuana Arrests, Federal Data Suggests, By Ian Urbina, June 3, 2013] to Rand Paul regurgitated its findings. Virtually no-one criticized it. So I will.

According to the study, marijuana arrests have increased over the last decade and now make up 52% of all drug arrests. Some 46% of all arrests are for simple possession. Moreover, the study found that

…a Black person is 3.73 times more likely to be arrested for marijuana possession than a white person, even though Blacks and whites use marijuana at similar rates.

The ACLU study relied on the Department of Health and Human Service’s National Household Survey on Drug Abuse and Health, which found that 14% of blacks admitted to using marijuana, while only 11.6% of whites did.  I will explain why these numbers are unreliable in future VDARE.com article. But, for now, I want to focus on the minority drug offenders whom the ACLU chose to “profile” (with no apparent pun intended) as victims of the “racist” war on marijuana in their report.

I expected the ACLU to find some isolated case of a grandmother with glaucoma who had 1.1 ounces of marijuana and was charged with a felony and spent years in prison. However, almost all of the ACLU’s offenders spent, at most, a couple nights in jail while awaiting a judge. The most serious consequence for their arrests were inconveniences: modest fines, probation, suspended driver’s licenses, a temporary suspension of student aid unless the student took a drug education program.

All the offenders admitted they were guilty of the crime and none of them purported that they had any intention to abstain in the future.

But one of the subjects faced rather more consequences. According to the ACLU:

The first time DeMarcus Sanders was arrested for having marijuana, it cost him his job, his driver’s license, the start of a college degree, a month in jail, and thousands of dollars. A police officer pulled Mr. Sanders over for playing his music too loud. “My music was up,” he said. “So I didn’t argue with him.” After the police officer ran Mr. Sanders’ license, he said he smelled marijuana, and insisted on searching the car. He found a single marijuana seed on the floor, and arrested Mr. Sanders. Mr. Sanders pled guilty and was sentenced to 30 days in jail. While in jail, he was let go from his janitorial job and lost credit for the college classes he had been taking. Even though it has been a few years since he was arrested, Mr. Sanders still owes the state $2,346 for room and board at the jail, and for fines, court costs, and other fees. “They always send you threats like ‘You’ll get more jail time if you don’t hurry up and pay this off,’” he said.

But these consequences did not deter Mr. Sanders from smoking marijuana. The profile continues:

Mr. Sanders feels like being an African-American in Waterloo [Iowa] makes him a target for the police. Mr. Sanders was arrested for marijuana possession again last July.

All that for one seed?

Well…not exactly. Looking into the case, I found that prior to Sanders’ arrest for marijuana, he had shot a rival gang member. According to the Waterloo-Cedar Falls-Courier,

After the clash ended, the rival group left and the weapons of choice quickly escalated. That's when Teondis Lemar Morehead drove back to Riehl Street with Curtis Junior Williams and Demarcus Darnell Sanders in his vehicle, Dalrymple said. He said Sanders and Williams opened fire—Williams hung out a window and fired over the roof of the vehicle—striking Rolandus Alexander, 18, in the leg.”

Waterloo is a small city, and the police may have been aware of Sanders’ past with gang violence. Perhaps this is why they decided to search him after he committed minor offenses—not merely because he was an “African-American in Waterloo.”

According to public prison records, Sanders spent less than 2 years in jail for the shooting. He was released in 2008, and remained on parole through 2010.

In this respect, sentencing him to 30 days for drug use was actually more lenient than revoking parole and sending him back to jail. I suspect that much of the $2,346 for room and board for the jail is actually related to Sanders’ time spent for the shooting.

The ACLU authors are obviously aware of Sanders’ criminal history. They always note if the subject of other profiles had clean legal records prior to their marijuana arrest. But in this case, they cunningly describe the episode as “The first time DeMarcus Sanders was arrested for having marijuana.” [emphasis added]

Note, by the way, that Mr. Sanders appears as an “African-American in Waterloo”  when he’s “singled out” for  marijuana enforcement, but when he actually shoots someone, he appears in the local paper as “Man imprisoned.”

With this context to DeMarcus Sanders’ tale, the people profiled in the ACLU’s report are actually indicative of the true state of marijuana laws: almost no one spends any jail time for simple possession unless they also have a violent criminal record.

The ACLU’s study notes that “an estimated 1% [the actual number: 0.7%] of the prison population serving time solely on a marijuana charge.”

But according to the famed liberal criminologist Mark Kleiman, even the 0.7% figure is misleading because

Jacqueline Cohen of Carnegie Mellon University has shown that prisoners whose conviction charge was drug possession actually had more serious histories of violence than those convicted of violent crime; it takes an extraordinary criminal history to lead a judge to sentence someone to prison time for just possessing drugs, especially for just possessing modest quantities of marijuana. [Marijuana Legalization: What Everyone Needs to Know, p. 50]

Similarly, reviewing Bureau of Justice statistics, an organization called “ Smart Approaches to Marijuana,” whose board members include Patrick Kennedy and David Frum  calculated in Marijuana and Who’s in Prison that only 0.1% the prison population is incarcerated for possession of marijuana without prior offenses.

Whatever the pros and cons of marijuana prohibition may be, the consequences it imposes on recreational users who are otherwise law-abiding citizens are virtually non-existent.

As I said, I will explain in a future VDARE.com column why the drug laws are not being applied unequally. But even if they were, marijuana legalization would have no effect on the disparate crime and corresponding arrest rates between blacks and whites.