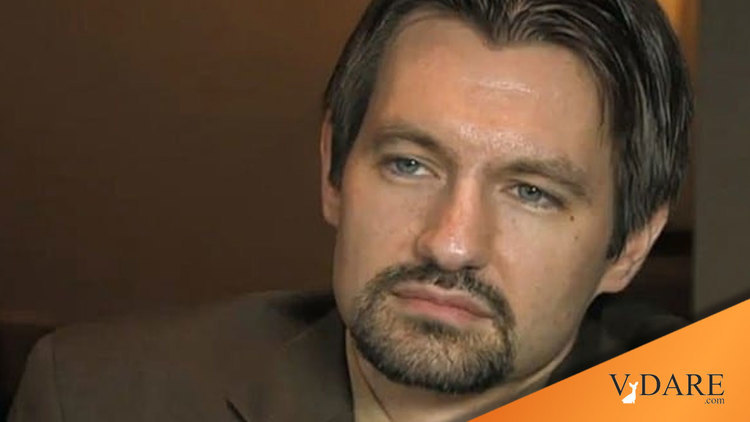 The Richwine Atrocity: How Come Only The Left Retrieves Its Wounded?

I have an unusual personal perspective on the Jason Richwine atrocity. William F. Buckley's breakthrough book was his first, God and Man at Yale. In the early 1950s, he scoured Manhattan for a publisher, without success. This caused him to go far afield and contact a small Midwestern house then located in a walk-up office in a Chicago suburb. The publisher was my uncle, Henry Regnery.

And the rest is history—save for two incidents.

The book not only made Buckley's reputation but also certainly added luster to my uncle's struggling firm. However, the Henry Regnery Co. suffered an offsetting financial blow when, at the behest of Mortimer Adler, the contract to publish the Great Books series for the University of Chicago was withdrawn because of the Buckley book.

Regnery issued Buckley's next book, McCarthy and His Enemies, co-authored with his brother-in-law, Brent Bozell. But there would be no hat trick. By then, Buckley was a bankable literary commodity and could cut a better deal with an established New York house. So he did.

My uncle was a kinder sort than I am, and I remember him recounting the break without rancor and more the kind of bemusement that implied "that's just Bill…”

I had a darker take on Buckley’s selfishness and treachery, which was borne out by subsequent events. But unfortunately, Buckley’s traits are now dominant in what VDARE.com calls “Conservatism Inc.” or the “Respectable Right.” In this respect, perhaps Buckley was indeed, as we are incessantly told, “the father of modern conservatism.”

Dr. Richwine has been defended by my friends who inhabit the guerilla outposts of the Dissident Right. They are right to blast Richwine's Cultural Marxist oppressors, but they overlook an important asymmetry between the two sides. The Left may savagely attack their perceived enemies, but they consistently stay loyal to one another.  As the saying goes, they retrieve their wounded. The Right, on the other hand, is filled with people who will, out of cowardice or cynicism, betray their colleagues when the going gets tough.

"No Enemies To The Left" was not an idle promise restricted to the French Left. Leftists hardly ever abandon a comrade on the field of battle. The association between Barack Obama and the admitted terrorists Bill Ayers and his wife Bernardine Dohrn has never been disavowed by the President. The inflammatory positions held by his long-time Chicago pastor Jeremiah Wright have been spun into irrelevancy.

By comparison, those on the other side of the aisle are forever slashing at their right flank.

Buckley had perhaps the most notches on his quill. The excommunication of Robert Welch was succeeded by demeaning the feisty libertarian Murray Rothbard,, and then on to many of Buckley's own colleagues: first, Joe Sobran, to be followed by Peter Brimelow, and John O'Sullivan. In the end, Buckley’s entire intellectual cohort was replaced as Catholic conservatives and paleocons were switched out for GOP publicists and a collection of ex-Trotskyites and Scoop Jackson Democrats who had purloined the name "conservative."

Buckley's behavior instructed a generation, not the least of whom were his successors, as demonstrated by their axing in 2012 of long-time writer John Derbyshire.

But there are many other examples, some long forgotten. Thus soon after becoming Speaker of the House, Newt Gingrich made fellow Georgia academic Christina Jeffrey "Congressional Historian." Forthwith, the Left surfaced a classroom comment, which, taken out of context, converted a contextualizing aside into a rationalization for the Third Reich. Gingrich dispatched her with haste. Jeffrey was eventually exonerated, but her dismissal indelibly marked her as an unsavory footnote in history.

My friend Samuel T. Francis, a History PhD from the University of North Carolina, had his award-winning editorial career truncated by another alleged conservative, Wes Pruden  of  The Washington Times, which proclaims itself as the conservative voice in the Capital. The paper first demoted and then fired Sam. Truth was not at issue but stepping on Leftist sensibilities was. In an obituary memorable for its pixels of journalistic pornography, David Mastio [Twitter] who the same paper later made deputy editorial page editor, declared, "Sam Francis was merely a racist and doesn't deserved to be remembered as anything else…America is a better place without him." [Francis re-fought immoral battles of 1964, Washington Examiner, February 22, 2005]

And then there’s my own experience. As a freshman at Penn, I became a member of the Intercollegiate Society of Individualists (now Intercollegiate Studies Institute or ISI) in the fall of 1960. For more than 45 years, I was continuously associated with the organization as an employee, donor, and trustee—until my own encounter with Political Correctness. In the spring of 2006, I was removed involuntarily from the board by a vote of 15 yea, 2 nay, and 2 abstentions. My infractions of orthodoxy involved delving into group differences and cognitive heritability.

I had known many of the hanging jury for going on half a century. Chief among them: then-Heritage Foundation president Ed Feulner, Dick Allen, Ken Cribb and the late Charlie Hoefflich. The others were the usual suspects: a politically connected DC lawyer, southern dilettante, sunshine general, a clutch of Beltway types, and a smattering of tenured academics. Of the lesser lights, our working relationship went back 15-25 years.

Since then, I have had never a comment in postscript from any of "my friends and colleagues." But other than a late-in-life lesson of fraternal treachery, the incident only raised my hackles.

Now comes the matter of Dr. Jason Richwine. Hired by the Heritage Foundation in 2010 as a newly minted PhD. from Harvard, he was forced into a very public resignation in 2013 because, not his work at Heritage but the unrelated topic of his years-old dissertation—immigration and IQ—was suddenly the object of Leftist Two Minute Hate.

All VDARE.com readers are familiar with this atrocity—to paraphrase Mae West, "Truth had nothing to do with it."

I do think it's pertinent, however, to consider the damage done to Dr.  Richwine personally. Dr. Richwine is in his early 30s and married with two young children. The nature of his research makes an academic future problematic, and the behavior of Heritage will always cast a pall on his reputation. Long after the specifics of the incident are forgotten, Heritage's peremptory action will serve as shorthand for some sort of culpability—much as Joe McCarthy’s censure by the Senate obscures the validity of his charges.

Even if it lacked the courage to stand firm, Heritage could have opted to succor the Richwine family by managing his departure. He could have been put on a sabbatical to do independent research. This would have thrown a scalp to the stalkers, provided financial support for his wife and children, and given him time to find another perch.

President Jim DeMint and the board of The Heritage Foundation stand convicted of, in Madeline Albright's indelicate vernacular, having no cojones. But this seems to be an evolutionary determined necessity for putative right-wingers who seek extended stays and handsome sinecures along the Potomac.

As a thought experiment, consider a stillborn Heritage in 1972. In its absence, how would the condition of the Republic be much changed?

After all the public relations hype, policy papers, and marginal legislative victories, what good is an organization that will not stand up for the most basic and hard-won of Western political rights, untrammeled inquiry and free expression—be it right or (and more to the point) wrong?

With the Left ascendant and Political Correctness policing the national discourse, the Heritage Foundation's further demonizing of dissent amounts to a copycat crime.

The actions of Heritage are the work of humans and not robots. The buck not only stops with President DeMint and founder Dr. Edwin Feulner but runs through the Board of Directors:

When the Black Book of Political Correctness is written about the intellectual inquisitions of this era, those who animate ISI and Heritage will be listed as secondary enablers. Not in the sense of Bernardo Gui and Cotton Mather, but in the manner of an Urban VIII.

Reciting odes to the "Western Canon" is no substitute for its tough application, which often puts the messenger in harm's way. What I trust will not be lost to future historians is the context of their hypocritical bloviating.

Dogs are born to chase bikes and cats. The Left is similarly constituted to pursue the totalitarian chimera of universal equality. Missionary work is lost on this crowd.

But those who claim to "stand athwart history"—but in fact aren't willing to risk the pleasant lifestyles for the truth—should be held to account. Those who further soil themselves by not accepting truth as an ultimate defense and revile those who seek it should be revealed and reproached.

There is honor among thieves. It merits the respect and emulation of honest folk as well.