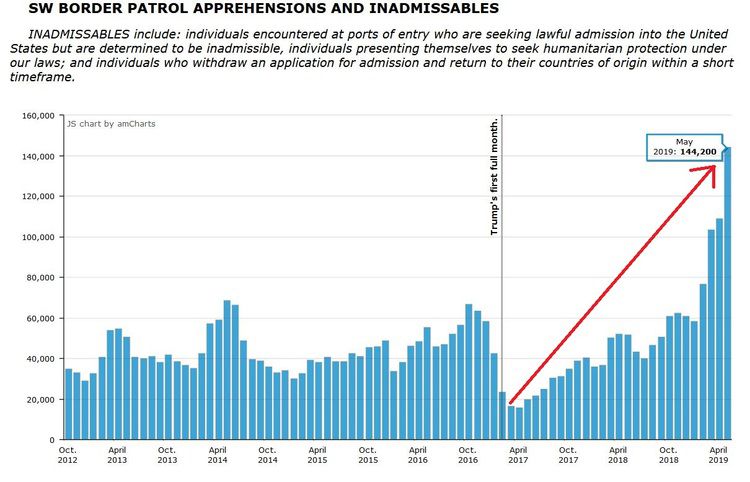 The May employment report confirmed what many analysts had suspected: job growth is decelerating. Employers added 75,000 jobs last month, well below the 175,000 Wall Street consensus, which was itself far below the 263,000 jobs created in April.

Employment growth per the Household Employment Survey was also fairly muted: a total gain of 113,000. But the Household Survey reports job figures by nativity—unusually—and our analysis reveals a bifurcated result, with native-born Americans gaining while immigrants were losing jobs:

Why the drop in displacement? It might be the tariffs that Donald Trump loves and mainstream economists hate.

But while American Worker Displacement fell in May, the May NVDAWDI was still seventh-highest among the 125 months we’ve tracked since January 2009. The all-time displacement high, 123.0, was set in April of last year.

(It is curious that the past two Mays appear to be such outliers, with large declines in American Worker Displacement. There are no seasonal adjustments made to the immigrant and native-born employment figures published in the monthly employment report).

A better sense job trends are the year-over-year comparisons for the month of May presented in the table below. The table shows immigrants gained jobs at 5 times the rate of native-born Americans over the past 12 months.

The long term trend is all too clear: Native-born American workers lost ground to their foreign-born competitors throughout the Obama years; this accelerated significantly in the months leading up to the 2016 election. And more than half way through his first term, President Trump shows no sign of breaking the trend.

From January 2017 through May 2019, Trump has presided over a labor market in which immigrants gained 1.6 million jobs, a 6.1% increase, while native-born Americans gained 3.1 million, a rise of 2.5%. As far as job growth is concerned, “America First” has not translated into Americans First.

These numbers are not seasonally adjusted, so year-over-year comparisons are likely more representative of the long-term trend. The record immigrant job share (18.08%) was recorded in April 2018.

The best news in the May report: wage growth. For years wage increases have been tepid even as the economy added jobs and unemployment continued falling. But now employees finally appear to be getting raises. For the second straight month average hourly earnings rose by 0.2% in May. In March wage gains of 0.1% were reported.

Over the past 12 months nominal private sector hourly earnings have risen by a healthy 3.2%.

(Note, however, that these recent gains look distinctly less impressive in a longer-term perspective).

The unemployment rate has been falling for years. Why did it take so long for wages to rise?

Economists increasingly believe the official unemployment rate is too narrow to capture the true slack in the labor market. It counts only people actively looking for work, which means it leaves out students, stay-at-home parents, people with partial disabilities, and others who might take jobs if wages were to rise above a certain threshold level.

If employers have been tapping into that broader pool of potential labor, it could help explain why they haven’t been forced to raise wages faster. But it is finally happening now.

Put differently, the Obama recovery was not strong enough to coax stay at homes off the couch and into the workforce. Trump has apparently changed that somewhat. 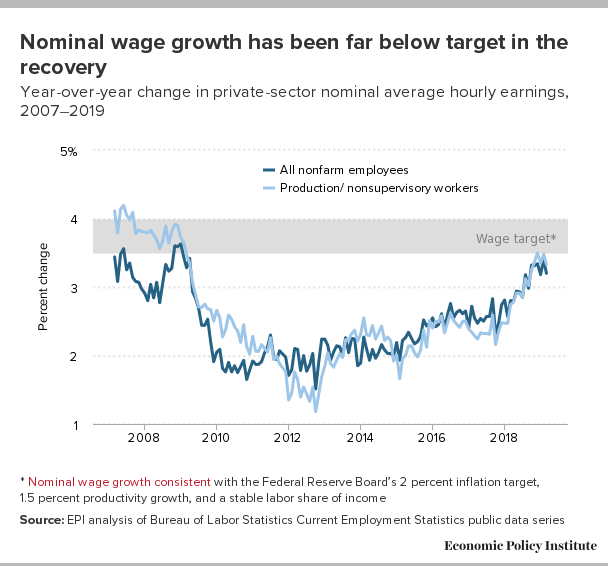 So the Leftist EPI and the studiously impartial National Data agree: wage growth is now recovering—but not as good as it should be.

What EPI won’t tell you: Immigration may be the reason. Even larger wage gains would have transpired had the immigrant share of employment not increased. Economist George Borjas estimates that every 10 percentage-point increase in the foreign-born share of employment reduces native-born Americans’ wages by 3% to 4%. [Immigration and the American Worker, by George Borjas, CIS.org, April 9, 2013, and Yes, Immigration Hurts American Workers , Politico, October 2016].

Since January 2009 the foreign-born share of employment has risen by 2.4 percentage points—implying that wages would be growing about 1 percentage point above the 3.2% to 3.4% rate of recent months had an immigration moratorium been in effect since then.

Meanwhile, the crisis at the southern border has degenerated to the point where something may actually be done about it…in Mexico if not the U.S.

More than 144,200 migrants were arrested and taken into custody along the southwestern border in May, a 32% increase from April and the highest monthly total in seven years. Most crossed the border illegally, while about 10% arrived without proper documentation at designated border crossings.

During the first five months of 2019 491,664 illegals have been apprehended along the SW border. That is equivalent to the entire population of Kansas City, Missouri.

Mexico is listening: the government says it will deploy 6,000 troops along its southern border with Guatemala.

But the U.S. Congress? Not a peep.