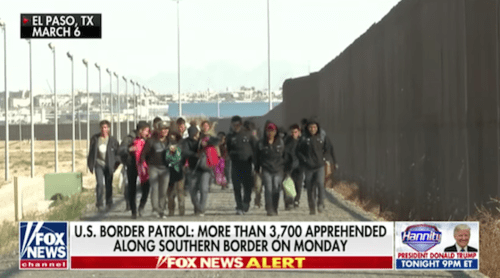 Border Patrol Projects Apprehension of a Million Illegal Aliens in 2019

The chaotic invasion now occurring on our southern border is disturbing to behold. It’s a reminder that some on the left hope to fundamentally change the culture of this nation using illegal immigration by urging Central Americans to leave home and claim asylum in the US. 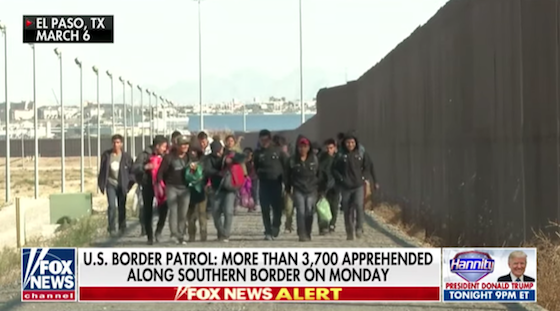 Unlike illegal immigration in decades past when mostly men came, the invaders are now dragging along their kids to guarantee entrance. But we see precious little reporting about the crushing burden on local jurisdictions, particularly schools.

When education’s limited budgets are squeezed by special programs for non-English-speaker students, citizen kids get less. Some tribal aliens from Latin America don’t even speak Spanish.

A bad situation is growing worse, and there are still millions more in Central America with a hankering for yankee dollars and a boatload of free stuff from the generous US government.

BILL HEMMER: Startling new information from Border Patrol — more than 3700 illegals apprehended in one day, that’s the largest daily number in more than a decade. William La Jeunesse has been on the border quite a bit and is live in LA from our bureau today.

WILLIAM LA JEUNESSE: Right now you have a perfect storm of factors coming together. Many in Congress and the media are in denial saying the numbers are fake news and there’s no deterrent, no consequence. There’s no jail, no fine, no deportation. There’s also an unlimited supply of Central Americans making $5 a day when they could make $15 an hour here. Last week agents released a thousand migrants in San Antonio, 2200 in McAllen, two thousand in El Paso.

BORDER PATROL AGENT JOE ROMERO: The moment they crossed the center of the Rio Grande, they violated our law and entered the country illegally. We have an obligation to interdict anybody that crosses outside of port of entry.

LA JEUNESSE: So Monday, agents dropped 800 migrants on the side of the road, forced by court orders and after 20 days in custody or eight hours in a bus, they must be released. So add this up — officials expect a hundred thousand apprehensions in March alone. That’s like filling a football stadium, so you can multiply that by twelve over a year — that’s a million apprehensions, larger than the population of San Francisco.

Most arrive destitute. Their children will attend school and receive free breakfast and lunch, and in many states qualify for subsidies, lawyers, healthcare, childcare, food stamps, housing and cash. Still many in Congress oppose prioritizing defense money to improving border security.

REP. ADAM SMITH (D-WA): The comment that funding a border wall out of the Department of Defense is also unbelievably irresponsible, and I won’t even get into the debate here about the wisdom of that border wall.

LA JEUNESSE: Secretary Nielsen is in Central America today trying to hammer out a deal. There’s a new caravan, 2500, coming north, they’re in Chiapas now. Unless Congress acts, which is unlikely, it’s going to get worse before it gets better.