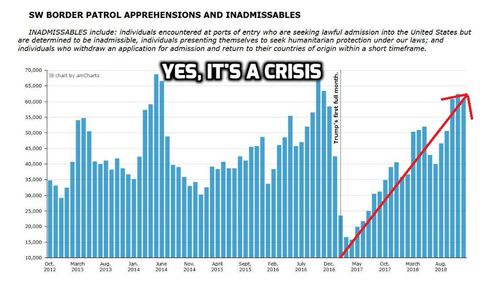 In  The Federalist, David Harsanyi points out the uselessness of MSM factchecking, with a note about a factcheck of the President's State Of The Union address:

Fact-checking subjective political assertions: The New York Times provided a masterclass in bad faith fact-checking by taking political contentions offered by the president and subjecting them to a supposed impartial test of accuracy.  In his speech, Trump called the illegal border crossing “an urgent national crisis.” The New York Times says “this is false.” Why? Because illegal border crossing have been declining for two decades, they say. Customs and Border Protection agents, they go on to explain, had arrested around 50,000 people trying to illegally cross the southwestern border each of the last three months, which was only half of the arrests they had made in comparable months in the mid-2000s.

Even if those numbers correct, there is no way to factcheck urgency. After all, a lessening crisis doesn’t necessarily mean it isn’t a pressing one. We’ve seen a steep decline in gun violence over the past 30 years. Would The New York Times ever “fact-check” a Democrat who argued that gun violence was an “urgent crisis” of public safety? Of course not.

Of course it's a crisis! Here's the latest chart:

To repeat something I said earlier, there's always a crisis in the border (has been for the entire 21st century) which has been somewhat abated from time to time since the election of Donald Trump. (We call this the Trump Effect.)

This chart of apprehensions only shows the ones the Border Patrol caught, and the Patrol admits that a lot of people get past them.

There are a minimum of eleven million illegals in the United States. That's the scale of the crisis, but the real problem isn't the illegals crossing--that could be stopped--it's the organized elite denial of the crisis. Here's the crisis the NYT says doesn't exist.

(Via Stu Burguiere‏ on Twitter.) As far as I can tell, this means it's not a crisis for you racist Americans, but it is a crisis for the poor, beleaguered, illlegal aliens...in their tens of thousands.