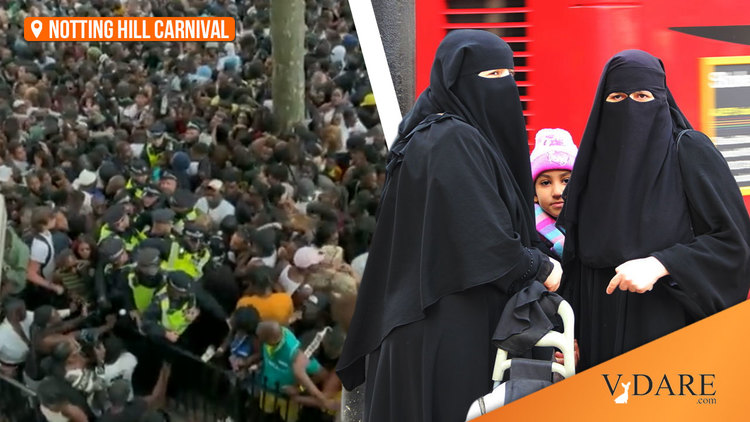 My Visit To London: John Cleese Was Right. It’s No Longer English

See also: DUNKIRK: “People Should Be Hung From Lampposts, They Should Be Burned Alive, For What They’ve Done To Britain”

Very depressed to report that our country is falling so fast that Europe is better.

I live in America and on my recent visit to London after several decades, I found that Leftist English comedian John Cleese was on to something when he tweeted in 2019:

Since then, virtually all my friends from abroad have confirmed my observation

So there must be some truth in it...

Enraged Leftists attacked Cleese, which of course meant that he was right.

Still, it’s one thing to read about it and another for reality to smack you in the face, as it smacked me in the face on arrival at Heathrow Airport and in my first taxi to my hotel, a short walk from Buckingham Palace. Airport employees were non-white, the taxi driver was non-white, and many of the employees at the hotel were non-white, even if they spoke with English accents. Of course Dulles International Airport, which I flew out of, is now another outpost of VFW [Very Few Whites]. But on my first visit to England 45 years ago, almost everyone I met was white and English.

Although England is still almost 90 percent white English, just 43 percent of Londoners are. That fact, and the city’s large black and “Asian” population, explains how Muslim Sadiq Khan—the son of Pakistani immigrants who says Islamic terror attacks are “part and parcel of life in a big city”—wound up as Mayor of London.

But maybe beheadings do prove that Khan’s London really is less an English city and more a what he calls a “global hub.” Just like the signs across London’s City of Westminster warning “people”—meaning Africans and other Muslim “migrants”—not to urinate and defecate in the street.

African cultures and an anti-British mayor have shaped #London into the dirty violent shithole it is today. We now have local government signs telling Khan’s ‘Londoners’ not to defecate in the street when they’re not busy stabbing each other. https://t.co/Afpk7TaN7l pic.twitter.com/nmbxNNzdz5

Then again, the African expertise of using bodily waste as a weapon to demoralize and terrorize whites is nothing new. As Enoch Powell told us 55 years ago, African blacks pushed “excreta” through an English woman’s mail slot. The woman, a war widow named Druscilla Cotterill, was the last white woman on her Wolverhampton street [Widow in Enoch Powell’s Rivers of Blood speech really did exist, by Fiona Barton, Daily Mail, February 2, 2007].

But let’s stick to the demographics. Blacks speaking strange African languages abounded, as did “Asians” and others. You expect to hear foreign languages in a big city such as London, but you don’t expect those who speak foreign languages to nearly outnumber those who speak English. However, it’s now as unsurprising as hearing a blond-haired, apple-cheeked boy speaking the Queen’s English. One hears a lot of French…not all of it from white Frenchmen.

As an American, when I go to England, I want to see and hear someone who looks and sounds like Laurence Olivier or Julie Andrews, not someone who sounds English—but isn’t—and looks like Sadiq Khan.

In keeping with the city’s Muslim mayor, a common sight is burqas—those “medieval rags,” as the late Oriana Fallaci called them—that cover Muslim women head to toe because the sight of a woman’s arm or leg might drive a man mad with passion [How Oriana Fallaci’s Writings on Islamism Are Remembered—and Reviled, by Annabelle Timsit, The Atlantic, December 15, 2017]. Muslim women in hijabs parade through Harrods, spending their wealthy Arab husbands’ money with abandon. Some of Harrods’ decor, most notably the Egyptian escalator and other imitation trappings of ancient Egypt, are the work of its former foreign owner, Mohamed Al-Fayed, the father of Dodi Fayed, the man with whom Princess Diana began an affair to stick her thumb of the eye of the British royals after Prince Charles divorced her.

Also foreign were most of the waiters, waitresses, and other restaurant employees I encountered, including almost the entire staff of my hotel. Some were white, but again, they weren’t English. They were French, Polish, or Eastern European. The white woman who managed the hotel restaurant was a Greek who emigrated to England so her young son could pursue an information technology career. Nice as she was, she will hardly defend her adopted city’s English heritage. Neither will any of the foreign white waitresses, delightful and accommodating as they were. Nor do the dusky-hued waiters and other staff, including the polite, accommodating fellow who sent me on my way to the airport. Anyone behind a counter in a store, including Harrods, seemed to be a non-white foreigner. A woman in a hijab worked behind the custom chocolate counter.

Many of the English whites I saw or met were either school kids, such as those who were at the British Museum, tourists from other parts of England, or, as one would expect, working-class men and women. The men who managed a small produce stand outside Victoria Station were white, as were most of the cab drivers I met in London. The cabbie who drove me back to the airport was a working-class white who drove newspaper delivery trucks before his days as a hack.

And here’s something I didn’t see in London, sadly enough, that I didn’t see in Rome 15 years ago: women pushing strollers, and certainly no mothers pushing strollers with three or four little ones in tow. Teenagers were few and far between. Almost all the whites were 20-something or older. Just about the only kids I saw were on that field trip at the British Museum.

Like the Italians, the English are contracepting and aborting themselves out of existence as Muslim women routinely spawn five or six wee Mohammeds. Most births in England are to Polish and Pakistani women [Births by parents’ country of birth, England and Wales: 2019, UK Census]. The highest fertility rates are among Arabs and Africans.

Speaking of the British Museum, by the way, while it peddles the same Woke “history” they all do, such as A Little Gay History, and has apologized for the past of its “slave trader” founder, Hans Sloane, it hasn’t gone completely round the bend [British Museum bosses remove bust of its founder Sir Hans Sloane over his links to slavery, by Lizzie Dean, The Daily Mail, August 24, 2020]. Some exhibits and the guidebook still label antiquities with “B.C.,” instead of the obnoxious, infuriating, and purposely Christophobic “B.C.E.” When the museum’s staff will catch on and correct the oversight we cannot know.

As for English, or London-born or reared, blacks, they did not appear as sullen or menacing as American blacks. Perhaps that’s because they speak with English accents, or more likely, because they simply aren’t sullen and menacing. They apparently don’t viscerally hate whites, at least not yet, because the schools and media haven’t treated them to hate-whitey propaganda 24-7-365.

Another sign that white Englishmen no longer control the once-great city: what I witnessed while waiting in line to visit Westminster Abbey—a tour I declined because of the 25-pound entry fee.

Shouting “Allahu Akbar,” a gang of angry Muslims—Muslims are always angry about something—marched down the median of St. Margaret’s Street as it turned into Abingdon. What they were ranting about we were not given to know, but my intrepid hostess for the trip gave them a piece of her mind: “Go home!” she shouted. “Go home.”

After I exited the line into the abbey, a young American tourist asked if we were leaving. Yes, we said.

Replied the tourist: “Just like those Muslims need to, right?”

The Muslims assembled elsewhere to continue their unwelcome raree. No one complained, and even if someone had organized an anti-Muslim counterprotest, they would likely have been met with arrest. After all, if Muslims are permitted to behead people in broad daylight, what’s the problem with a dozen or so furious, menacing protesters who scare the tourists outside Westminster Abbey? Or blocking sidewalks for the call to prayer?

Again, as the Leftist BBC reported, more than 20,000 colonists disguised as “migrants” have invaded England since January 1. Choudary tells followers to use public benefits to fund jihad, plans to turn Buckingham Palace into a mosque, and warns that Shariah law, via demographic war, is coming to the sceptr’d isle.

For all we know, Choudary tells his disciples to defecate and urinate in the street, too.

Of course, this can and will change if the immigration is stopped. But that doesn’t seem likely to happen. London and other major cities such as Birmingham, where political power lies, are controlled by Leftists and Muslims because, to cite Cleese, they are not English cities any more.

“Asian” grooming gangs got away with mass rape, a form of sexual jihad, for three decades for a reason: Imported Muslims are so numerous in England that police and public officials feared being called “racist” if they identified the “ethnicity” and targeted the culprits to stop it [More than 1,000 children were raped and sexually exploited over 30 years in Telford where police and council officials ’ignored’ abuse over fears investigating Asian men would ‘inflame racial tensions,’ by Jessica Warren, Daily Mail, July 12, 2022].

More than 1,000 children were raped and sexually exploited over 30 years in Telford https://t.co/Gs43aEvqjs

The Labour Party opened the borders not just to “rub the right’s nose in diversity,” but to Elect A New People—Arab, African, and Asian Muslims—who would vote for the Left. But even “conservative” prime governments, the last few years, the border remained open.

As Nigel Farage, the hero of Brexit, recently said in a much-noted article:

I led a previous political insurgency as the leader of Ukip. Britons may well find that the next insurgent leader in the UK, whoever he or she may be, is nowhere near as moderate as I was.