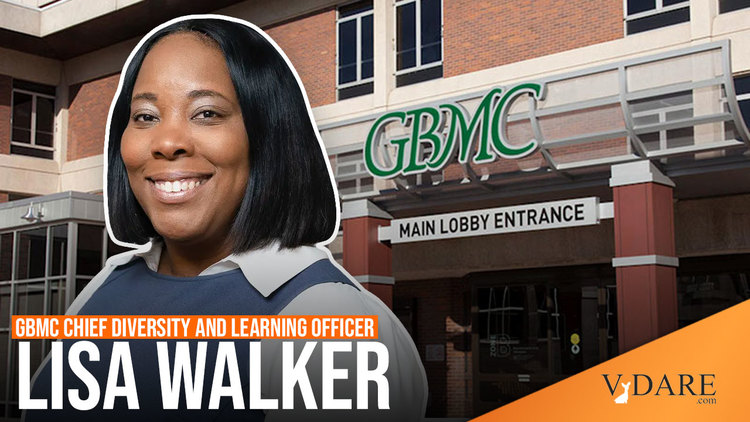 The Politicization Of Medicine And The Medicalization Of Politics

See also: Women Are Taking Over Medicine—Not Necessarily Good For Them, Or Their Patients

Eight years ago, as I prepared to retire from medical practice, health care was under assault. A federally mandated computerized medical record had complicated charting patients and added hours of daily unproductive work for hospital staff, with no improvement in the quality of care [Value of the Electronic Medical Record for Hospital Care: Update From the Literature, by Aykut Uslu and Jürgen Stausberg, Journal of Medical Internet Research, December 2021]. To reduce needle sticks to cleaning personnel who improperly handled medical waste, OSHA had required a massive change in needles and IV catheters, from cheap and easy-to-use, to expensive and awkward [OSHA issues needle safety regulations, Relias Media, March 1, 2001]. Obama’s “Affordable Care Act” had made health insurance more UNaffordable. Bureaucratic regulations had delineated a patient’s hospital stay and payments for medical services. Nurses accepted that they would spend more time checking boxes than caring for patients. But those were the good old days. Now, the Era of the Woke Medicine is really upon us.

GBMC (Greater Baltimore Medical Center), a leading private hospital in Baltimore, recently announced that it “is a community-centered hospital system fortunate enough to be part of a diverse community. GBMC HealthCare Chief Diversity and Learning Officer Lisa Walker says dedication to diversity and inclusion is at the forefront of GBMC’s vision” [Inclusion and diversity among patients and staff are priorities at GBMC, GBMC.org, July 8, 2022].

What does that mean? Ms. Walker explains as only a diversicrat can: 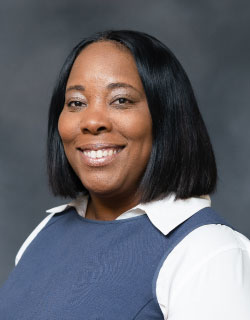 “I oversee both strategies so we can be very intentional with our work,” Walker says. “That includes leveraging the resources of the entire team to get that work done and making sure our workforce has basic education and competency.”

More specifically, Walker says, this includes making sure all GBMC leaders are trained on unconscious and implicit bias, gender-inclusive language, and gender identity, and ensuring GBMC supports the LGBTQ+ community and culture.

“It also includes improving recruitment practices and working on increasing the diversity of our leadership team,” Walker says. “We’re partnering with diverse, community-based organizations to ensure we can increase the pipeline of candidates.”

The goal is “increasing the diversity of the leadership team from 25% in 2022 to 35% in 2023.” The “leadership team,” GBMC’s website explains, comprises the “executive team” (hospital bureaucracy), department chairs, and board of directors, which are overlapping sets.

A group photo suggests that the actual “minority” component is more like 11 percent, but I hear that numeracy is a white thing.

In any event, Walker’s goal is remarkably aggressive: the population of the 21204 zip code is still 70.8 percent white and only 14.6 percent black.

I mention GBMC because I worked there, and because my internet search of other community hospitals in Baltimore County failed to turn up any official Diversity Officers or conspicuous campaigns of race-based hiring. So, at least for now, GBMC appears to be exceptional.

The same cannot be said of Maryland’s University hospitals. Here is Johns Hopkins: “We envision a Johns Hopkins Medicine where diversity, equity, and inclusion are in our DNA” [Inclusion. Collaboration. Equity, Johns Hopkins Office of Diversity, Inclusion and Health Equity].

Apparently, genetic determinism can apply to antiracism but not to race. Who knew?

The official Hopkins statement is so dull that it might lead you to conclude that the administration’s heart (and brain) aren’t really in it. After all, it’s easy to cut and paste this kind of cant:

At Johns Hopkins Medicine, we believe that everyone has a role in promoting diversity, inclusion, and equity in health care, research, and education.

We must acknowledge, actively address and work toward effectively managing our negative biases, so that we collectively make decisions that improve the lives of our patients, our colleagues, our learners, and our community.

We stand against discrimination and oppression in all their forms.

It is vital that we achieve equity for all, including those who are most vulnerable.

Alas, if you thought that Hopkins’ commitment to replacement of whites in medicine was just for show, you’d be wrong. The Annual Report of the Office of Diversity, Inclusion, and Health Equity shows how serious the hospital is. The report celebrates all the new Diversity hires and the array of indoctrination programs for medical school faculty and students, including “unconscious bias training” and “racial listening training.” It also celebrates a Community Outreach Program to give experimental Covid-19 jabs to blacks and disabled people—because foisting the experimental mRNA jabs on as many suckers as possible has been a Regime priority almost as high as replacing whites.

Baltimore’s other medical school, the University of Maryland, is staffed for diversity too, with a “multi-year plan, backed up by a $40 million investment” [How We Are Working Toward Equity, Diversity and Inclusion, UMMS.org].

Still, with only two leaders on its Diversity Team, the university is way behind Hopkins, which boasts at least 10.

Come on, Maryland! You can do better than that!

Baltimore is not unique. University hospitals and medical schools all across the country support the Diversity, Inclusion, Equity—DIE—agenda. I could not find an exception.

We support and protect members of racial and ethnic minorities, individuals with disabilities, veterans and military families, members of LGBTQ+ communities, immigrants and refugees, and the many others who enrich our community.

Well, in fact they impose a heavy tax on the community, but they certainly enrich the managerial class [The Diversity Tax, by M.G. Miles, Those Who Can See, December 13, 2016].

This conformity is unsurprising in light of the Association of American Medical Colleges’ announcement last month of a new set of “competencies” in DIE [Diversity, Equity, and Inclusion Competencies Across the Learning Continuum, AAMC.org]. Anti-white and misandrist ideology is now to be part of the curriculum at every level of training, instead of merely in admission to medical school. And because the AAMC oversees the Medical College Admission Test, we may be certain that the next round of tests will favor Diversity and Wokeness over merit.

The leaders of the profession will do nothing to arrest this trend. Once upon a time, professional organizations such as the American Medical Association and the various specialty societies set standards for their members. They still go through the motions, but since the 1980s, the federal bureaucracy has usurped all the important rule-making functions, and the AMA and its affiliates have become effete parasites increasingly devoted to status-seeking and awarding pretty ribbons and certificates. Today’s status-seekers are well aware they must prostrate themselves before the Trinity of Diversity, Inclusion, and Equity or be cast into the outer darkness.

As bad as the situation was when I last reported on the AMA, it is worse now. Chief Diversity Officer Aletha Maybank remains at her post, riding high as one of the “top diversity leaders in health care.”

She leads the charge to police Bad Words. They’ve been at this word-perversion game for years, but now the AMA has issued a detailed glossary [Advancing Health Equity: A Guide To Language, Narrative, And Concepts, AMA-assn.org].

If you can bring yourself to see the humor in it, this 54-page document is really pretty funny. Many of the new, improved terms are merely revisions of previous Leftist euphemisms. “Disadvantaged/under-resourced/under-served” is now unsuitable because it understates the role of oppression and victimization. Please use “Historically and intentionally excluded; disinvested” instead. The more cumbersome the terminology, the better. For “Ex-con/felon,” please substitute “Formerly incarcerated / returning citizen / persons with a history of incarceration.” The word “minority” is “now considered pejorative” because it “means ‘less than.’” To avoid offense, say “Historically marginalized or minoritized or BIPOC.”

By such locutions shall ye know the righteous.

The Great Awokening has not spared allied disciplines. This month, a midwife sent me the schedule of the Diversity & Inclusion Conference of the American College of Nurse-Midwives (ACNM) for 2022. Participants learn such valuable skills as “How to Recognize and Repair Microaggression,” and how to “Reduce Perinatal Racial Inequities.” Other speakers address “Racial Disparities in Healthcare,” “How Her-Story Informs Practice,” “Why Equity Matters,” and on and on.

Most of the speakers were People Of Color, including the 1619 Project’s Nikole Hanna-Jones, whose speech won’t count for Midwifery Continuing Education.

Last year, the ACNM was “thrilled to announce” that its closing keynote speaker was Communist Angela Davis [Email her],  the Lenin Peace Prize winner whose visage once appeared on the FBI’s 10 Most Wanted List. Perhaps more frightening was the number of those who were not only excited about Davis but also said she was the reason they would attend. 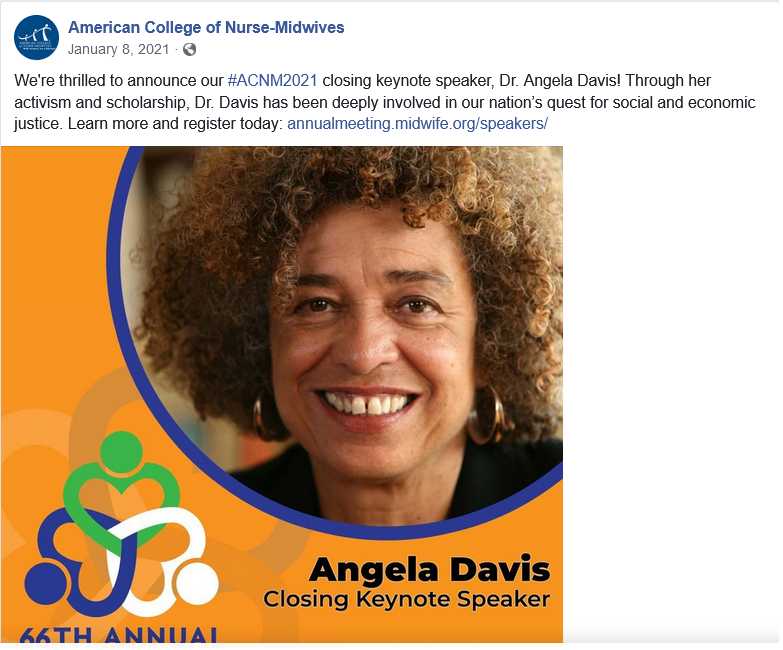 Back in the 1950s, America’s Social Justice Warriors began their assault on education, transforming the public schools into tools of a racial reckoning. The resulting collapse of public education is now a matter of record. Now the destroyers have seized control of the medical Establishment, and they have broadcast their goal very clearly: DIE.

Medical education is becoming politicized. But politics are becoming medicalized too, as I will show in my next article, on the COVID public health policy catastrophe.

Dr. Cockey [Email him] is a retired diagnostic radiologist and a refugee of Baltimore. His 2018 dystopian novel The Sacred Fury, set in Baltimore in the near future, with a subplot involving the death of Edgar Allan Poe, is a cheerful diversion from the grim realities of the actual future.