The Lying Press Will Get Blamed For Next Big Terrorist Attack. Quite Right Too.

Multiple bombs placed in New York and New Jersey, a mass stabbing in Somali-occupied Minnesota, and renewed threats from the Islamic State have made barely a blip in the Main Stream Media’s campaign of hatred against Donald Trump and his supporters. Neither has a devastating report indicating 800 immigrants who were supposed to be deported and were instead (I’m not making this up) given American citizenship. [Watchdog: Feds wrongly granted citizenship to hundreds facing deportation, FoxNews, September 19, 2016] 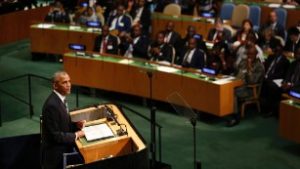 Instead, even now, Barack Hussein Obama is confidently addressing the United Nations about the dangers of “aggressive nationalism” and “crude populism,” as he continues his audition to become the next U.N. Secretary-General [Obama Warns Against ‘Aggressive Nationalism’ And ‘Crude Populism’ In UN Speech, by Willa Frej, Huffington Post, September 20, 2016]. And as the MSM marches lockstep behind him, it’s clear our Minority Occupation Government is simply not concerned about terrorism. The Administration and its pet reporters are far more worried about Donald Trump and the prospect of Western renewal.

This is certainly true in the era of mass immigration, as restive Islamic populations are now a permanent part of life in almost every Western (or post-Western) city.

It is tempting to say that Western leaders really think that, through skilled policing and interaction with the “moderate” leaders of the Muslim “community,” they can prevent terrorism. To them, terrorism is simply “random” or a “mistake” which can be prevented by implementing the correct procedures.

This is what Gandhi (to cite a respectably Third World source) once called a “Himalayan blunder.” in one of the latest terrorist attacks, it was none other than the suspected attacker’s father who directly told the FBI years ago that his son might be involved in terrorism [Ahmad Khan Rahami Charged in New York and New Jersey Bombings, by Marc Santora, Adam Goldman, Rukmini Callimachi, and Nate Schweber, New York Times, September 20, 2016]. And Ahmad Khan Rahami’s wife and mother fled the country shortly before the attack [Chelsea bombing suspect’s wife and mother left US days before attack, by Jamie Schram, Tina Moore, and Yaron Steinbuch, New York Post, September 20, 2016].   But, as indicated by the DHS’s foul-up on granting citizenship to immigrants who were supposed to be deported, the federal bureaucracy is absolutely incapable of undertaking the basic duties necessary to protect Americans and enforce the law.

Of course, we already know how this is all going to turn out—look at Europe. In Germany, even the crazed Angela Merkel is reluctantly admitting if she could do it over again, she would not have been as reckless in opening her country’s borders to unlimited Muslim immigration. [Angela Merkel signals she may back down from open-door refugee policy after disastrous Berlin election, by Justin Huggler, Daily Telegraph, September 19, 2016] But she is only willing to admit this after suffering a stinging defeat in regional elections—suggesting that she is simply trying to save her job rather than showing she’s learned anything. 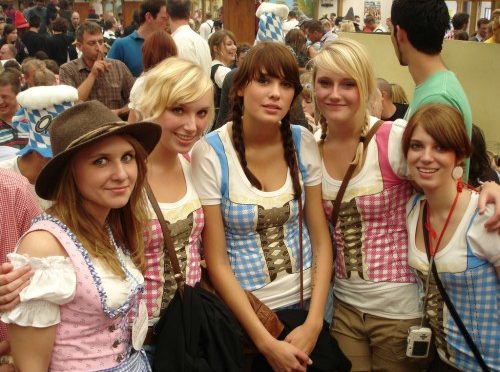 If the post-9/11 standard of “if you change your lifestyle, the terrorists will have won” applies, Germany has already been defeated. The traditional Oktoberfest celebration resembles an armed camp rather a festival because of fears of terrorism. [Oktoberfest security tightened over terrorism fears, BBC, September 17, 2016] According to the interior minister, there are more than 500 Islamic militants now in the country capable of carrying out attacks [German minister: There are 500 ‘potential attackers’ in Germany who pose a ‘real and present danger,’ by Erik Kirschbaum, Reuters, September 11, 2016].

Meanwhile in France, local authorities are on the brink of revolt after the national government announced plans to redistribute Muslim “refugees” all around the country from the notorious Calais “jungle”. [‘Jungles all over France!’ Mayors revolt against ‘secret’ plan to turn country into Calais, by Oli Smith, UK Express, September 16, 2016] Only Napoleon’s birthplace of Corsica is being spared—because residents there have been physically attacking Muslim refugees and the government evidently fears it cannot maintain control.

With the rise of “no-go” zones dominated by Islam and now a “nationalist veto” in Corsica, it seems like the predictions of eventual civil war are no longer fantasy.

And yet even as the costs of mass immigration continue to become more and more obvious, the Ruling Class/ MSM is doubling down on phony outrage. Today’s clickbait was a tweet from Donald Trump Jr., comparing Syrian refugees to Skittles. “If you had a bowl of skittles and I told you just three would kill you, would you take a handful?” the meme asked. This, we were told, is “dehumanizing” and a bad way of looking at a “humanitarian catastrophe”. [Taste The Outrage: Donald Trump Jr.’s Tweet Compares Refugees to Skittles, by Scott Detrow, NPR, September 20, 2016]

But is it true? At this point, we know with absolute certainty at least some of these “refugees,” a large number of whom are fighting age males, are likely to be terrorists. We know our own government is either unable or unwilling to properly vet them. We know that if they come in sufficient numbers, they will cause cultural, financial and law enforcement problems of the kind we have seen in Europe, even if we are able to avoid large scale terrorist attacks. And we know the Islamic State, the largest terrorist group ever existing, is urging attacks within the West. 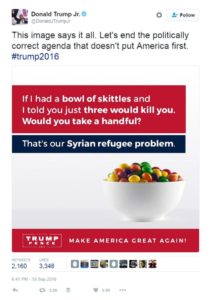 What, exactly, do we gain from admitting these refugees? As even the wimpish  Mike Pence responded cuttingly:

It is remarkable to me to see the level of outrage about a metaphor used by Don Jr. when Hillary Clinton is calling for a 550 percent increase in the Syrian refugee program. All the while our FBI and public safety officials tell us we can't know for sure who those people are coming into this country

Few now argue that mass immigration has been good for Europe. Indeed, it’s hard to see why any Westerner would continue to favor more refugee resettlement on the Continent or in North America except for hatred for its white population. Of course we can assume that’s what’s motivating George Soros, who has now announced a staggering $500 million in new programs to help “refugees” [George Soros to invest $500 million in help for refugees, by Nyshka Chandran, CNBC, September 20, 2016].

Pat Buchanan recently argued that the MSM has put its credibility on the line by arguing so openly and strenuously against Donald Trump. But the attacks in recent days and the ominous signs of conflict show there is something far larger at stake.

The MSM is now openly covering for a disastrous policy with deadly consequences. They are concealing the danger because they don’t want to see Donald Trump elected. But they are playing with fire.

If there is a large-scale terrorist attack in either Europe or America before the election, people won’t just blame Barack Obama, Angela Merkel or Hillary Clinton. Nor will they blame just the security services. They’ll blame the MSM which told them this policy was a moral necessity.

And they’ll be right to do so.

The lying press isn’t just a threat to “freedom of speech” or “conservative” political ideology. It’s a threat to our survival as a nation and civilization.

And the next time there is an attack, we shouldn’t forget the names of those who opened the gates to those who wish our destruction.