But the main weapon in London isn’t guns — it’s knives. That fact alone should show that violent people will commit their savagery even if no firearms are available. Even if all guns were confiscated in the US (which would cause a civil war), the Left’s imagined utopia of non-violence would not appear: the bad guys will find sharp implements to commit crime because the hardware store is full of them.

A Friday headline from Breitbart.com exemplifies the worsening crime violence: Six Stabbed in Another Night of Violence as Sadiq Khan Dodges Blame For London Crime. 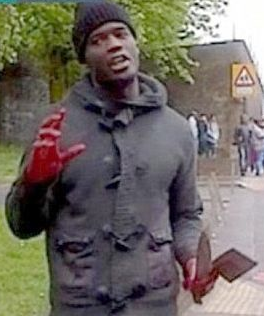 Adding to London’s crime problem is diversity: the city ceased to be majority white in 2012, a shocking demographic transformation caused by immigration and white flight. According to a 2011 census, over 12 percent of London residents were Muslim, a number that has likely increased. 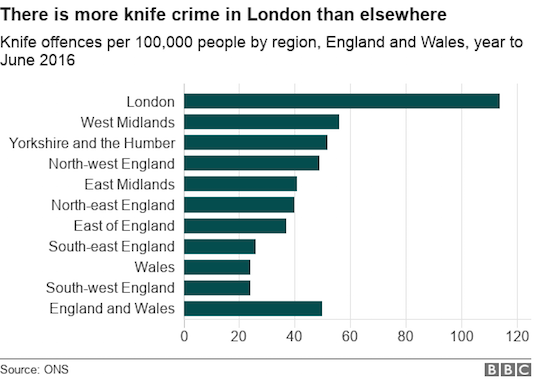 Farage laid out the current crime problem — emphasizing how political correctness is preventing proper policing — but mentioning the substantial “rise in knife crime” in the process.

NIGEL FARAGE: I’m afraid the rise of violent crime in London’s been going on now for some years: it isn’t just gun crime, there’s been a 40 percent rise in knife crime during the course of the last decade and the new phenomenon of acid attacks. So we really have got a big problem in some of the boroughs of London, and what we’re seeing this is not about rules, it’s about policing and we used to have something called “stop and search” where the police would stop a suspects to see whether they were carrying a knife. We’ve stopped doing that — do you know why? Because the police are too fearful of being thought to be racist if they pick up somebody who’s black. So what you’ve now got is political correctness is killing people in London.

In addition, Farage was asked about the series of debates he is having with former Mexican Presidente Vicente Fox on the topic of globalism versus the nation state. Of course, the BREXIT leader is a supporter of the nation-state and Vicente Fox loves open borders, particularly those bordering Mexico facing north:

FARAGE: I’ve been doing a series of debates in universities over America this week explaining to people that actually the kind of globalism that people like Fox support is a globalism in which bureaucracy takes over from democracy, in which the nation-state frankly gets degraded; and I’m trying to explain to students in American universities who’ve been told that BREXIT and Trump are terrible, that actually what happened in 2016 is we voted to take back control of our lives and our nations, and they shouldn’t be scared, they should be excited about the future.