CBN’s Islam investigator Erick Stakelbeck visited London recently to see how cruel, misogynous sharia is increasing in scope there — as a result of diverse Islamic immigration as it happens. 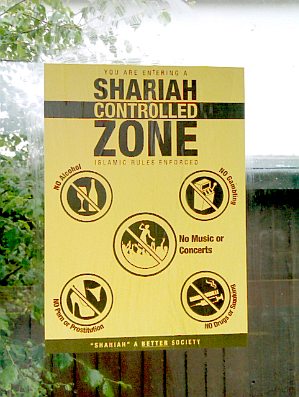 In the Tower Hamlets neighborhood of London, hostile Muslims have posted signs declaring the place to be a sharia zone, meaning infidels, particularly women and gays, are not welcome. When Stakelbeck asked British jihadist pest Anjem Choudary how sharia would change the park where they were speaking, Choudary replied that ALL women would have to burqa up. Of course. Islam is all about who’s on top, and it sure isn’t women or non-Muslims.

Why would anyone allow these barbarians to immigrate en masse to their country? A recent poll of Muslims residing in the United States found that 40 percent believe they should be judged by sharia law, not the US Constitution. As Stakelbeck noted later in the piece, there have been around 50 court cases in at least 23 states where aharia law was cited in some way, so creeping Islamism is here too.

LONDON — Stoning for adultery. Amputations for theft. Death for apostates. And second-class status for Christians and Jews. This is life under Sharia law, the Islamic system practiced in countries like Iran, Saudi Arabia, and Great Britain.

There are reportedly some 85 Sharia courts now operating there, with Islamic judges ruling on cases ranging from financial to marital disputes among British Muslims.

“We went into some proceedings and there were a couple of Islamic judges sitting up above the rest,” said Alan Craig, who recently stepped down as leader of the Christian Peoples Alliance party. “And there was one Muslim woman who was suing for divorce.”

“A woman’s witness value is half that of a man,” Craig told CBN News. “So [the courts] will tend, therefore, to take the man’s position in a divorce.”

Craig is working with Baroness Caroline Cox to pass a bill in Britain’s House of Lords protecting women from this Sharia oppression.

Muslim women in Great Britain often face intimidation within their communities to settle things the Sharia way. According to Craig, some wrongly believe Islamic courts are their only option.

“What we’re trying to do is say, Muslim women, especially in this country, need to be informed,” he explained. “They actually have other rights and our view, better rights, under English law.”

Sharia courts operate outside of British common law. Their defenders say the courts are legal under a 1996 Arbitration Act that allows people to settle differences through methods of their own choosing.

The courts have popped up in several British cities with large Muslim populations, including Birmingham, Bradford, Manchester, and London.

The Tower Hamlets section of East London is arguably the epicenter of the Sharia movement in Great Britain.

The impoverished borough has been dubbed “The Islamic Republic of Tower Hamlets.”

Its first elected mayor is a Muslim who critics say has ties to extremist groups. His office declined CBN News’s request for an interview.

Radical Muslims have threatened women there for not covering up, and gays have been beaten in the streets.

“If people are afraid of having their hands cut, don’t steal,” UK Islamist leader Anjem Choduary said. “If you don’t want to be stoned to death, don’t commit adultery.”

Last year, his followers put up posters around Tower Hamlets labeling it a “Sharia-Controlled Zone” where “Islamic rules are enforced.”

“We’re sitting in a beautiful park here in East London,” CBN News’ Erick Stakelbeck observed during an interview with Choudary. “How would this park look different if Sharia came to the UK and your vision came to the UK?”

“Certainly, the adult women, whether Muslim or non-Muslim, would have to cover themselves, as indeed would the men,” he responded.

Craig fears the growth of Sharia law in areas like East London could lead to Muslim enclaves isolated from mainstream British society.

So could Sharia courts come to America? The idea sounds far-fetched to some.

According to the Center for Security Policy in Washington, there have been some 50 court cases in at least 23 states that have seen conflicts between Sharia law and American state law.

And four states have adopted legislation, called “American Laws for American Courts,” that would protect U.S. citizens from the use of any type of foreign law, like Sharia, in the courtroom.

In East London, Craig said the fight against Sharia is much more than a religious or legal issue.

“It’s actually a human rights thing,” he said. “And we’re working in partnership with non-Christians as well on this trying to bolster and strengthen the position for Muslim women.”