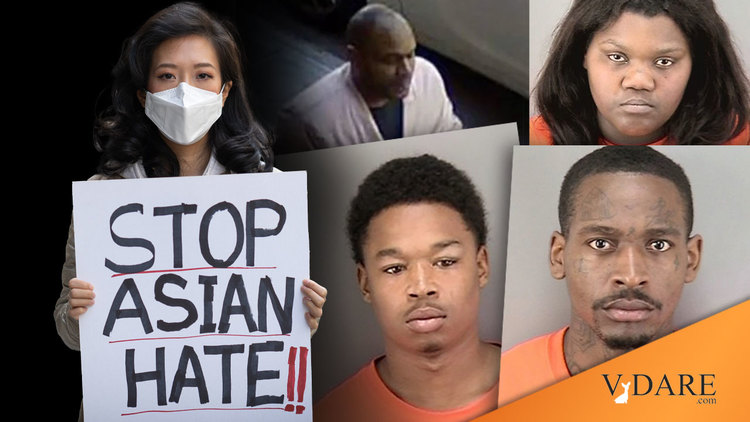 Michelle Malkin: Who Murdered All The Asian Women—And Who's Covering It Up?

I’m a 5-foot-1, 105-pound, 51-year-old woman of Pacific Islander/Asian descent. That’s much more personal data than most women are willing to share publicly, but I’m all about being blunt. Let’s face it: My gender, ethnic background and small stature make me a perfect target for violent crime in big cities that are soft on criminals—especially repeat offenders who happen to be black.

Black-on-Asian violence is a bloody reality. According to the federal Bureau of Justice Statistics criminal victimization report published in 2019, 182,230 Asians in America were victims of violent crime in 2018. Black offenders were the perpetrators in a whopping 27.5% of those cases—the highest of any racial group. Given that black Americans make up only 12% of the population, that means black offenders on a per capita basis commit more than five times as many violent attacks on Asians as whites or Hispanics.

The math is the math. The facts are the facts. But you wouldn’t know it from mainstream media coverage (or rather, cover-ups) of the robberies, rapes and homicides committed by black assailants against women who look like me.

Here is how the New York Times selectively reported on the grisly stalking, alleged sexual assault and brutal stabbing frenzy this weekend that left a 35-year-old Korean American online producer bleeding to death in her own New York City apartment bathroom:

A 35-year-old woman was killed in her Manhattan apartment by a man who followed her into her building, the police said. Identified as Christina Yuna Lee, she was the latest person of Asian descent injured or killed in a string of attacks in New York City.

Lee’s attacker was not just a “man,” but a black man—the latest perpetrator of said race arrested in a string of violent attacks against victims of Asian descent in New York City. And Los Angeles. And San Francisco. If Lee’s race is relevant enough to spotlight in the lead paragraph of America’s so-called “newspaper of record,” why isn’t the alleged killer’s?

In Woke America 2022, you’re not allowed to ask such questions, let alone Notice.

When Chinese American financial executive Michelle Alyssa Go was pushed to her death off a subway platform in the Big Apple a month ago, the Black Lives Matter–crusading media played racial hide-and-seek. NBC News headlined a piece decrying the crime: “NYC subway station death of Michelle Go leaves Asian Americans reeling.” Described simply as a “homeless man,” Go’s admitted murderer is a serial black offender with a long rap sheet dating back to 1998. His race was not mentioned a single time in the NBC News story, which drummed up hysteria about “hate crimes.”

When Filipina American nurse Maria Ambrocio was fatally attacked in Times Square last October, Yahoo News made sure to put her ethnicity in the headline but described her attacker—in the midst of a violent crime spree—as merely a “mentally ill man” of unidentified race. I’ll let you guess.

When Vietnamese garment worker Than Than Htwe was murdered last July in NYC, WABC radio reported: “Asian Woman Pushed Down Subway Stairs Dies; NYPD Identify Suspect.” Once again, the race of the victim earned its place in the headline, but not the race of the suspect, David Robinson. Guess again.

Why does it matter, you might ask, that the Black Lives Matter–worshiping media selectively plays up the race of Asian victims while deliberately whitewashing the race of the perpetrators in these horrible cases? It matters because when you remove “white privilege,” “white supremacy,” “white patriarchy,” Donald Trump and the Republican Party as scapegoats, uncomfortable facts, statistics and realities about these violent outbreaks of failed coexistence in America remain. Woke white academics and political propagandists are part of the cover-up. So are clueless woke Asian liberals.

For merely noticing and sharing my observations with others who have noticed, I’ve been flagged by the Southern Poverty Law Center, banned by Airbnb and, most recently, tarred as a white supremacist sympathizer by the Idaho Statesman. No matter. You can rig the headlines and algorithms. You can smear and condemn. But you can’t stop those with eyes open from noticing.