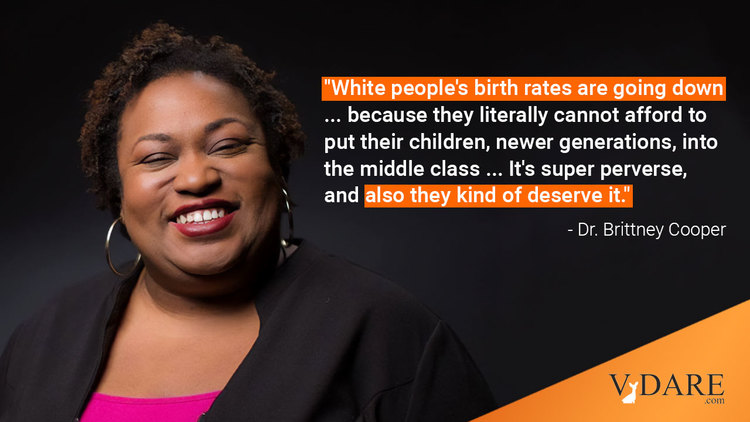 Brittney Cooper—sorry, that's Dr. Brittney Cooper—certainly takes the cake for the nation's worst tenured radical (at least for this week, until the next academic nutjob erupts).

Armed with a Bachelor of Arts in English and political science from Howard University and a doctorate in American Studies from Emory University, the Rutgers women's studies and Africana studies professor sure can holler. Cooper made headlines this week after her unrepentant hatred of white people went viral. Among the many dispassionate scholarly observations she shared with attendees of an online critical race theory conference were these:

The Root Institute (a confab created to "advance the agenda of Black Americans" by editors of The Root online magazine, whose motto is "The Blacker the Content The Sweeter the Truth"), hyped the rant session as a "healthy dose of reality." The "institute" effusively praised Cooper's "masterful and unabashed ability to speak truth to power." It's amusing, of course, that she's allowed to breathe any word about the Great Replacement, let alone gloat about the demographic decline—while left-wing character assassins at the Anti-Defamation League and Georgetown University Bridge Initiative accuse me of "normalizing white supremacy" or trafficking in "conspiracy theories" for decrying the very same phenomenon.

But that is how the social justice cookie crumbles. In the interest of bending over backward to be fair, let's pretend Cooper [Email her] was just having a bad day or was caught off guard. Perhaps her true academic self is hidden in on-camera interviews and can be found in her published work. Her most recent book, "Eloquent Rage: A Black Feminist Discovers Her Superpower," was named a "Best Book of 2018" by the New York Public Library and hailed by, um, noted public intellectual Joy Reid of MSNBC as "a dissertation on black women's pain and possibility."

"Dissertation," whoa! Must be some deep-thinking, highbrow research there. I rushed to read the opening lines of Cooper's Eloquent Rage and found ... yet more profane spouting and spewing:

I then wandered on over to Cooper's collection of published academic writings on Google Scholar and sifted through titles such as "SlutWalks v. Ho Strolls," "Disrespectability Politics: On Jay-Z's B----, Beyonce's 'Fly'A--, and Black Girl Blue," and "Feminism for Bada--es" in elite journals such as the Crunk Feminist Collective and Signs: Journal of Women in Culture and Society.

Cooper touts her rigorously researched work on "representations of Black women in popular culture, including a piece on the representation of the 'baby mama' figure in Hip Hop music and film; the feminist implications of Janet Jackson's 2004 Super Bowl mishap; and the importance of Michelle Obama in the tradition of Black female leadership." She and two other black feminist loudmouth professors also joined to produce Feminist AF [that's an offensive slang term]: A Guide to Crushing Girlhood, targeting "loud and rowdy girls, quiet and nerdy girls ... queer girls, trans girls, and gender nonbinary young people"—published by the once-esteemed book conglomerate W. W. Norton & Co.

Wokeness has made a complete and irreversible joke of higher education. Yet, too many Boomers and their Gen-X progeny continue to push their college-age kids and grandkids into these cauldrons of insanity. "There are some solid schools left in the country," they tell themselves. "The toxicity isn't as prevalent in STEM fields," they insist. "A B.A. degree is still worth it for my children," they rationalize. "If we just wish race-consciousness and racial realities away, America will be OK," they fantasize.

News flash: Anti-white, anti-male and anti-American cancer in academia has reached Stage IV. What more evidence do you need to wake up and walk away.