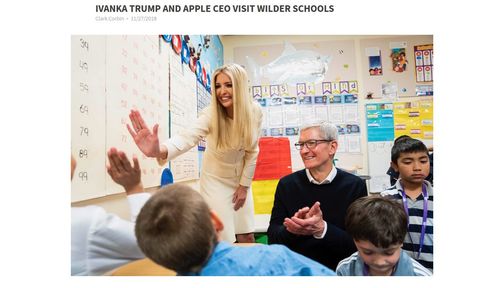 When it comes to Silicon Valley Santas bearing gifts for our children, I am a big Scrooge. Every responsible parent should be, too.

In 2016, Apple CEO Tim Cook showered a rural Idaho school district with 500 iPads and Apple TVs for every classroom, along with free training as part of a 29-state $100 million personalized digital technology program. He visited the Idaho schools recently with Ivanka Trump, where she praised the "laboratories of innovation" for using Apple products "to transform the learning environment and personalize students' educational experiences based on their unique needs and strengths!"

With all due respect, this is what I call Edutech Shiny Toy Syndrome. And it's out of control. Kids don't need screens for individualized educational experiences. They are already on those stultifying, addictive, isolating screens far too much. Bah! Humbug!

Why give captive schoolchildren more tech crack inside the classroom? And what is this "personalized learning" mumbo jumbo? That's what human beings—you know, parents and teachers—are for at home and at school.

Besides, after three years, what is the actual proof that all of Apple's and Google's and Microsoft's infiltration of the classroom is producing actual academic improvement and results? There is none. The Silicon Valley companies don't want to talk about academic achievement. Neither do all of the salivating administrators and edutech cheerleaders happily taking shiny toy bribes.

That Idaho superintendent so enamored of Apple's goodies even admitted: "We're not trying to boost a test score here, we are trying to change a narrative for students."

I'll control my own kids' "narratives" and their personal data, thank you very much.

Parents from all parts of the political spectrum understand that "personalized learning" is Silicon Valley propaganda to distract from the true aim: Grabbing student and family data under the guise of "innovation" and luring the next generation of addicted consumers. Another unhealthy byproduct of the tech toy infiltration: an onslaught of online ads. Education watchdog Cheri Kiesecker reported this month that Missouri school kids required to download educational apps, sign up for online accounts and use tech devices logged into Google products were exposed to advertising for everything from "vaping" to "insurance, medicine, automobiles, toys, clothing, candy, and a wide range of apps and video games."

I've reported previously on how the Los Angeles Unified School District dumped $1 billion of scarce resources into a disastrous iPad program. Educrats paid $678 per glorified Apple e-textbook, pre-loaded with Common Core-branded apps created by the educational publishing and testing giant Pearson. Pearson's digital learning products are now used by an estimated 25 million-plus customers in North America. Common Core, far from dead, has been a convenient new catalyst for getting the next generation of consumers hooked.

"It's annoying to just sit there staring at one screen for so long," freshman Mitchel Storman, 14, told the New York Post. He spends close to five hours a day on Summit classes in algebra, biology, English, world history and physics. Teacher interaction is minimal. "You have to teach yourself," Storman rightly complained.

No outside research supports any claim that Summit Learning actually enhances, um, learning. What more studies are showing, however, is that endless hours of screen time are turning kids into zombies who are more easily distracted, less happy, less socially adept and less physically fit. Standing up to the Silicon Valley Santas and asserting your family's "right to no" may well be the best long-term gift you can give your school-age children.