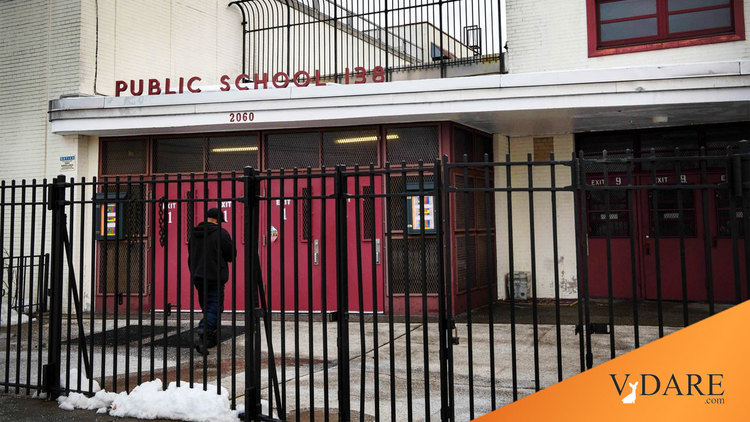 Minorities Vandalizing Their Own Schools Out Of Envy, 62 Years Ago Today

Elsewhere on the site, Roger Devlin is writing about Helmut Schoek's book Envy: A Theory of Social Behavior, written in Germany in 1966, and translated in 1969.

In the 1950s, at the same time as school desegregation, many white liberals began to worry that schools in white neighborhoods were getting more funding than those in black neighborhoods. A campaign to build new, state-of-the-art schools for the underprivileged was launched. The immediate result was widespread vandalism. In 1958, the New York Department of Education was forced to replace 160,000 windows and make good the damage done by 75 cases of arson. Schoeck notes that envy was probably the motive:

To the slum child, the daily contrast between his “home” and the school’s air-conditioned chrome-and-glass luxury is an irritant. If he is burdened with learning difficulties, he sees school as a world to which he will never belong. He knows that when his schooldays are over there will be no comparable place of work waiting for him. What, then, is more probable than that he should give free rein in vandalism to his rage and resentment? The culprits may be turning against too perfect an environment which they themselves did not help create.

Within a few years, schools were being built with fewer windows, and they had iron bars. Many noted the resemblance to prisons.

I found a story referencing this in the New York Times archives, 62 years ago today. 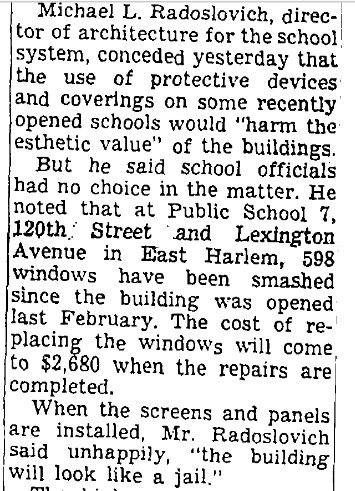