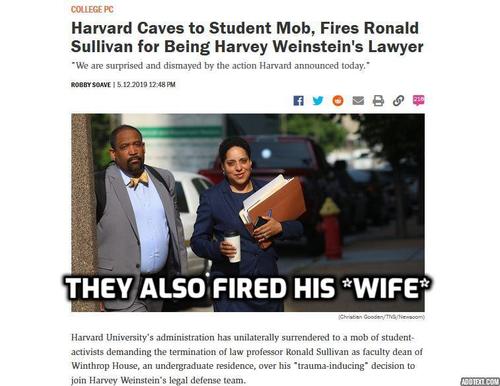 I have no love for left-wing, Hillary-promoting Hollywood producer and accused #MeToo villain Harvey Weinstein. Nor am I a fan of those who perpetrated the cop-bashing "Hands Up, Don't Shoot" fiction involving social justice martyr Michael Brown. But I do strongly believe that a grave injustice has been committed by Harvard's witch-hunt mobsters against a law professor who joined Weinstein's legal team and had represented Brown's family in a civil suit against Ferguson, Missouri.

Too bad Ivy League elitist bubbles have purged themselves of people with the backbone, integrity, and courage to end the madness.

Ronald Sullivan, faculty dean of the undergraduate dorm Winthrop House, was terminated from the honored position after hysterical student protesters condemned his decision to take on Weinstein's case as "trauma-inducing." Protests, sit-ins, temper tantrums, an online Change.org petition and even litigation by offended female students created pressure on the university for months. The administration sought to appease the mob with a "climate review," no doubt hoping to quell the rebellion against Sullivan as the school year came to a close. No dice. Harvard College Dean Rakesh Khurana [Email him] announced over the weekend that both Sullivan and his wife, Stephanie Robinson, co-faculty dean at Winthrop House, will be removed on June 30.

It is worth noting a few things about Sullivan that you would think would provide an immunity shield from the SJW pot-stirrers. Sullivan boasted impeccable liberal credentials: president of the Black Law Students Association in the 1990s and current adviser to the group; director of the law school's Criminal Justice Institute; former lead counsel at the Washington, D.C. Public Defender's Office; and head of the Brooklyn, New York, conviction review unit, which has exonerated 25 men to date and remains a model for similar units across the country.

"When he was first appointed," exoneration lawyer Oscar Michelen recounted this week, "I dropped everything I was doing and drove up to Otisville Correctional Facility to meet with my then-client David McCallum to tell him that finally, after years and years of struggle to prove his and his deceased co-defendant's Willie Stuckey's innocence, we at last were finally going to be heard. I couldn't guarantee his exoneration, but I could guarantee that we would be treated fairly with Sullivan at the helm. And we were right—not just because he agreed with us and recommended vacating the convictions, but because we were treated with respect and given all the time we need to plead our case. Sullivan set the tone and demeanor of the Unit, which was that justice would be served regardless of the outcome and with dignity and respect for all participants. And this—this is the man Harvard students don't trust?!? He makes you uncomfortable?!?"

Yes, this is the man that feminist mau-mau-ers accused of posing a threat to their well-being because honoring due process and the presumption of innocence shows he "does not value the safety of students he lives with in Winthrop House."

Danukshi Mudannayake, a staff member of the Harvard Crimson, spearheaded the lynching of Sullivan—and, in a flabbergasting demonstration of guilt-by-association vindictiveness, his wife. An ecstatic Mudannakaye told The New York Times she was "proud" of her school, which she said was indulging in a "celebratory" climate after the axe fell on Sullivan and Robinson. Scalpers love blood.

Never mind the horrific implications for any criminal defense attorney, any wrongfully accused defendant and any professor who genuinely believes in and practices the Sixth Amendment. Or the First, Fifth, Eighth or 14th amendments. All it takes is for unhinged rabble-rousers to heat up the "climate" and bam, you're outta there.

The "progressives" are eating their own. And, after persecuting constitutional conservatives among faculty, students, speakers and donors, there is no one left to stand guard against the rabid hounds. Good luck with that.