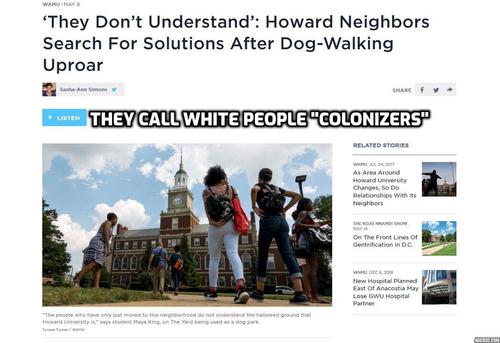 Some 3,000 people, almost every one of them black, swarmed onto the intersection of Washington D.C.’s 14th and U Streets last week for the #DontMuteDC protest known as “Moechella”—part of a gathering protest following T-Mobile’s order that its Metro PCS storefront stop blaring “go-go” music. But it not really about music. It’s about “gentrification”—the movement of young affluent whites into to D.C. [Why Last Night’s #MOECHELLA Protest Was a Big Deal for DC, by Elliott Williams, Washingtonian, May 8, 2019]. As VDARE.com’s Nicholas Stix once put it:  Funny Thing: Coming Or Going—Gentrifying Or Fleeing—It’s Always Whitey’s Fault!

In April, T-Mobile ordered the store to stop the high-decibel music after a neighboring resident threatened to sue. Protestors took the streets, and T-Mobile, naturally, surrendered [Go-Go Music Is Back At Shaw’s Metro PCS Store, by Rachel Kurzius, thedcist, April 10, 2019]. But a month later, blacks are still seething. Hence “Moechella,” a neologism that combines “Moe,” D.C. slang for homeboy, and Coachella, the name of the music festival in California.

But before discussing of #DontMuteDC/Moechella, it’s worth reviewing a little history about the city’s demographics.

Contrary to widespread current belief, Washington D.C. has not always been a “Chocolate City”— that is, majority black. A century ago, the city was 75 percent white. In 1940, it was still72 percent white.

Not until the 1950s did the city turn brown. Between 1950 and 1960, Washington, D.C. went from 65 percent white to 45 percent white as the white population fled rising crime and headed for the burgeoning suburbs in Maryland and Northern Virginia.

By 1970, the white population had dropped again, from 45 percent to 27 percent. This was largely due to the riots after the assassination of Martin Luther King in 1968. The anarchy helped convince whites the time had come to seek safer communities devoid of color to raise their children.

More than 1,100 buildings in the District were damaged or destroyed by an estimated 20,000 rioters. More than 1,200 fires were recorded. A dozen people died in the flames or at the hands of others, including the police. Roughly 13,600 federal troops made their way into the District, marking the largest occupation of an American city since the Civil War. More than 1,000 people were injured and 6,100 were arrested. Thousands of businesses were looted and destroyed.

But as Harry Jaffe notes in the preface to the 20th Anniversary Edition of Dream City: Race, Power, and the Decline of Washington, D.C.: “In 1960, the District became the first major American city to have a majority black population. African Americans peaked at 71 percent of the city in 1970. By 2014 that number was hovering at 50 percent and slipping.”

Unexpectedly, Whites have returned. After hitting a low of 29.6 percent in 1980, the white share of DC’s population has grown to 45 percent by 2017. And Hispanics are now 11 percent of the population. 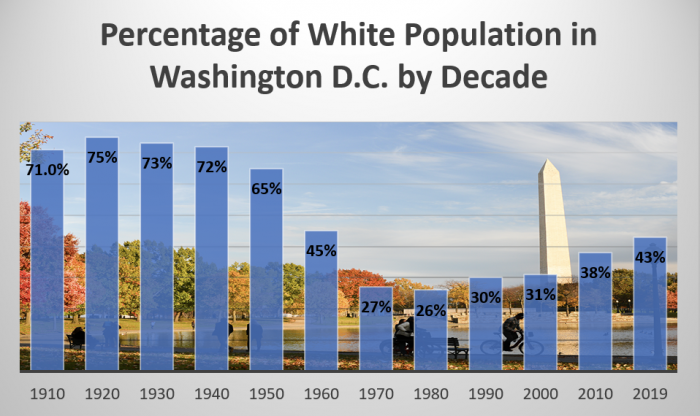 These data, not a beef about music, are the real import of Moechella. And it’s not the only recent sign:

…[T]he gathering did bring D.C. residents together around the “Don’t Mute D.C.” slogan once again, as D.C. residents confront the threat of gentrification after two recent controversies highlighted the disconnects between the city's recent newcomers and historic residents.

For example, black Washingtonians rallied in protest in early April after a Metro PCS store in Shaw was asked to silence the go-go it had been playing from speakers at the corner of 7th Street and Florida Avenue NW for nearly 25 years after new neighbors complained about the noise.

And later in April, anger boiled over again on social media after media reported on students at Howard University who were angry over the way new neighbors were using The Yard, a historic quad on the campus of the historically black college, to walk their dogs. The report included a comment from a neighbor who suggested Howard move their campus if they didn't want to accommodate new neighbors.

Washington, D.C. has been struggling with gentrification, from Black neighborhoods to HBCUs, residents are fighting back and not allowing outsiders to take over their home. The latest battle is over Howard University and local officials in D.C. do not appear to give a damn.

The issue came to a head last month when Sean Grubbs-Robishaw, a local resident, who admitted to cutting through “The Yard” with his dog and said, “So, they’re in part of D.C. so they have to work within D.C. If they don’t want to be within D.C. then they can move the campus. I think we just need to work together and I don’t think it should be a he or there or here… It’s our community and that’s how it should be.”

The influx of young white millennials have changed D.C.’s racial makeup. African-American residents in the historically black Shaw-Logan Circle area plummeted from 65 percent to 29 percent between 1990 to 2010, according to census data.

Let’s hope the colonizers can walk their dogs somewhere else outside of Howard University.

[D.C. Officials Don’t Appear To Give A Damn About Colonizers Infiltrating Howard University’s Campus, by NewsOne Staff,  May 10, 2019.]

That wasn’t the only explicitly anti-white rhetoric; The Root has more if you need it. [#MoeChella Is What Happens When Natives Push Back Against Colonizers; Thousands Converge on City for Go-Go, by Stephen A. Crockett Jr., May 8, 2019].

Funny thing is, Washington D.C. blacks know the city is a safer place to live thanks to the “colonizers” (and their dogs).

A black writer for NPR has actually reported that the influx of whites near Howard’s campus made the community safer, although he didn’t quite say it outright:

One night [around 2000] I was with 10 of my friends walking home to our dorm, when two men from the neighborhood popped out of the shadows with guns and robbed all of us. Another time, at an off-campus frat party, a football player got stabbed in an altercation with some guys from the area.

The neighborhood around the university's campus then felt much rougher than it does today.

That is because crime is actually down in the area around Howard. The police department reported about 7,700 total crimes in D.C.'s third district in 2000, compared with just over 6,000 in 2015.

The glut of liquor stores and rundown properties that dotted the area have given way to more bike shares and coffee shops. In 2000, the area around Howard was just 3.6 percent white. In 2015, white residents accounted for more than a quarter of residents, according to the Census Bureau.

So Booker’s report admitted the community around Howard had changed and was thriving—and it’s probably more so now. What changed it? “Colonizers” and their dogs.

But that truth won’t stop the anti-white Moechella activists, or the anti-white writers NewsOne, from fuming and frothing about the return of whites who are making the city safe not just for themselves, but for the city’s law-abiding, silently approving, blacks.