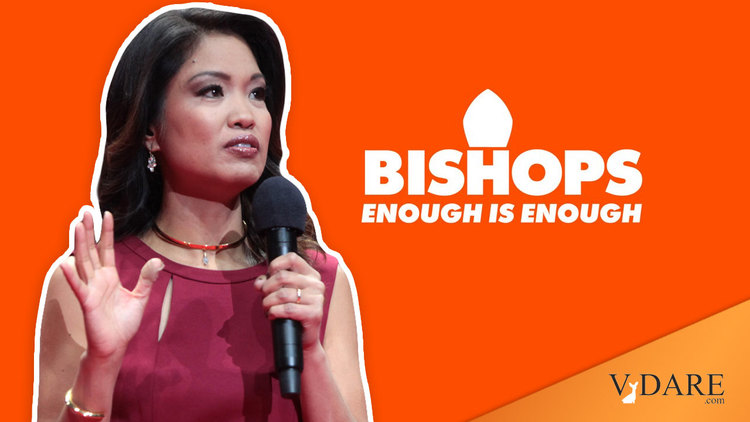 These are abridged remarks I gave Tuesday morning in Baltimore at the "Enough is Enough" protest across from the annual gathering of the U.S. Conference of Catholic Bishops.

Church Militant senior producer and St. Michael's Media founder Michael Voris was forced to go to court to hold the prayer rally and gathering of Catholic dissidents after their permit was canceled by Baltimore's speech-squelching city solicitor James Shea. Baltimore authorities baselessly accused Voris and scheduled speakers of promoting violence; the 4th Circuit Court of Appeals upheld a lower district judge's ruling that "the First Amendment to the Constitution is at the heart of this case...The city cannot conjure up hypothetical hecklers and then grant them veto power."[PDF]

I would first like to address the evil corruptocrats here in the city of Baltimore, right across from us at the U.S. Conference of Catholic Bishops, down at the White House, perched in the Vatican, and deeply embedded in the Deep State and Creep State. Look at my face and the faces of every single Catholic bearing witness here today. Hear our voices. Heed our words. We will not be silenced.

I would also like to directly address the lying corporate media—the so-called fact checkers, those narrative distortionists, control-freak gatekeepers and professional defamers who have tarred us one and all as violent domestic terrorists.

They poured fuel on the nationwide fires of the George Floyd riots. They coddled bloodthirsty Antifa demons tearing down the pillars of civil society. They created monsters such as Shaun King, who smeared us as "white supremacists" and incited acts of vandalism against our places of worship. They turned a blind eye over the past two years to the targeting of Catholic churches, decapitation of Catholic statues and bloody assaults on prayerful Catholics.

Hear our voices. Heed our words. This is what truly peaceful protest looks like.

I am humbled to join you all today to speak about the unholy alliance of radical bishops, Open Borders Incorporated and pandemic profiteers. But first, I must take a moment to honor every brave survivor of clerical sexual abuse in the audience or on the speakers' roster here today. Loyalty, fear, intimidation, shame, denial and lack of transparency all darkened the path. The survivors shined their light and showed us the way.

I believe the same is true for the Catholic Church's deplorable racketeering for mass, uncontrolled immigration and shilling for Big Pharma's toxic and sinful enterprise.

Since 1986, when open-borders lobbyists were hammering out the disastrous Reagan amnesty on Capitol Hill, Catholic leaders in the U.S. and abroad have moved from fighting against legislation that enhances American immigration enforcement to actively undermining enforcement and violating immigration laws.

Disgraced Leftist Cardinal Roger Mahony, censured and banned for his role in covering up sexual abuse, was booted from his post in Los Angeles yet continues to this day to advocate that Catholic clergy and other Americans brazenly defy deportation orders and harbor so-called Dreamers in the name of charity and compassion. These policies have enriched cartels, traffickers, smugglers, coyotes and the vast network of left-wing nonprofits while inducing the poor to traipse across the desert, stuff themselves in car trunks and cash in on their own children.

Is there any more obscene illustration of the need to drain the Catholic Deep State and defund the Creep State?

Bishop Thomas Joseph Tobin of the Providence, Rhode Island, diocese issued a declaration of support for driver's licenses for illegal aliens in his state, citing the pope's call "to welcome immigrants into our midst" because "these immigrants will enrich America and its Church."

In 2019, the USCCB sat on net assets of $377 million and raked in total revenues of $188 million. Its annual government grant revenue totaled nearly $50 million; with $23 million funneled to a program encouraging illegal alien unaccompanied minors to trespass our borders; $16.5 million for refugee admissions; and $12.1 million for refugee and entrant assistance. In 2020, Catholic Charities vacuumed up $5 billion—$2 billion of which came from government sources.

Pandemic profiteers are false saviors in a soul-destroying industry that relies on rigged clinical trials, sabotage of informed consent, silencing of the vaccine-injured, persecution of devoutly pro-life parents and workers whose pleas for support as they face losing their jobs and livelihoods are being spurned by junk-science promoting priests and bishops, and blanket protection from corporate liability in the name of the "common good."

In the face of such godlessness and ruin, our faith must be stronger than our fear. We must be engaged in all-out spiritual warfare—fully immunized against the real deadly viruses of moral relativism, cultural Marxism and globohomogenized capitalism. Church Militants, not Church Milquetoasts, are required for such a time as this.