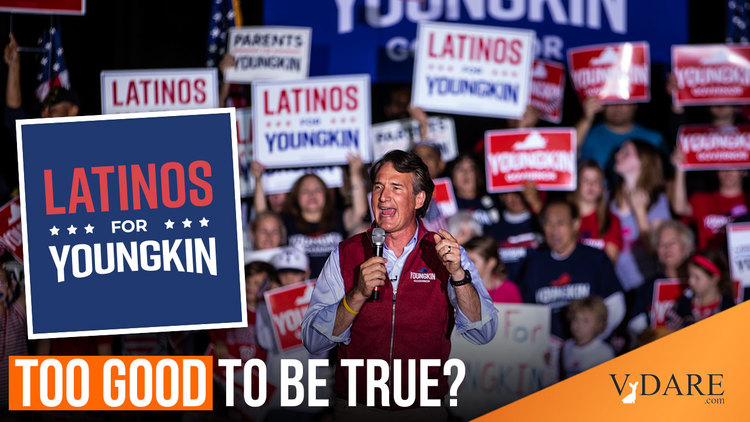 After Republican Glenn Youngkin defeated leftist Terry McAuliffe for governor of Virginia, GOP Strategerists went about their usual cucked routine. The Stupid Party apparatchiks said Youngkin’s victory was a rebuke of socialism, with black Republican Sen. Tim Scott, R-S.C., claiming that results—which included a GOP takeover of the General Assembly’s House of Delegates—show that diversity is the party’s strength. 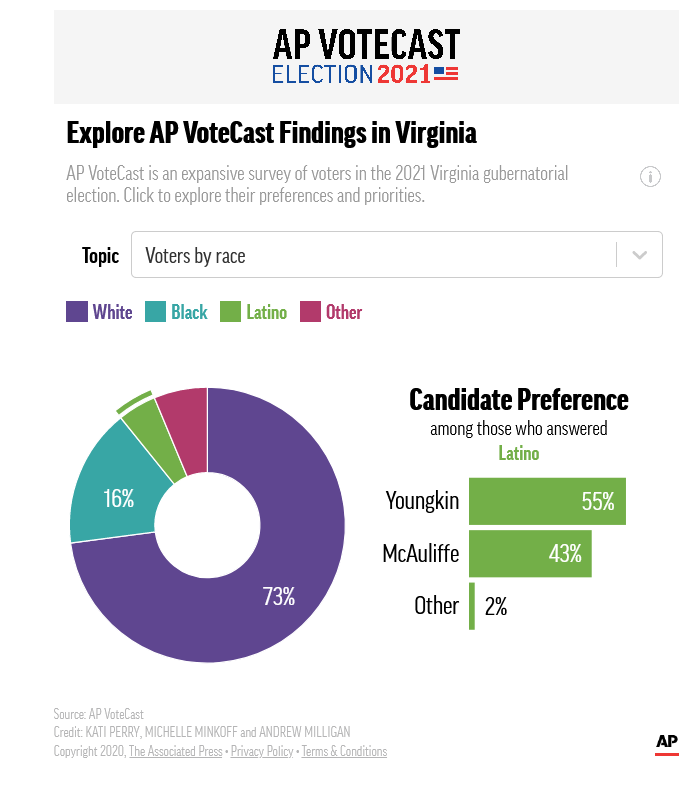 My take as a Venezuelan immigrant highly worried about the Historic American Nation: you’re right if you think that sounds too good to be true.

Other exit polls reported numbers more in keeping with Democrats’ usual dominance of the Hispanic vote [In The Year 2050, Democrats Will Have 68 Million More Voters Alive Than Republicans, Red Elephants, July 2, 2018]. According to a Washington Post exit poll, 66 percent of Hispanics voted for McAuliffe; just 32 percent voted for Youngkin [Exit poll results from the 2021 election for Virginia governor, November 2, 2021]. 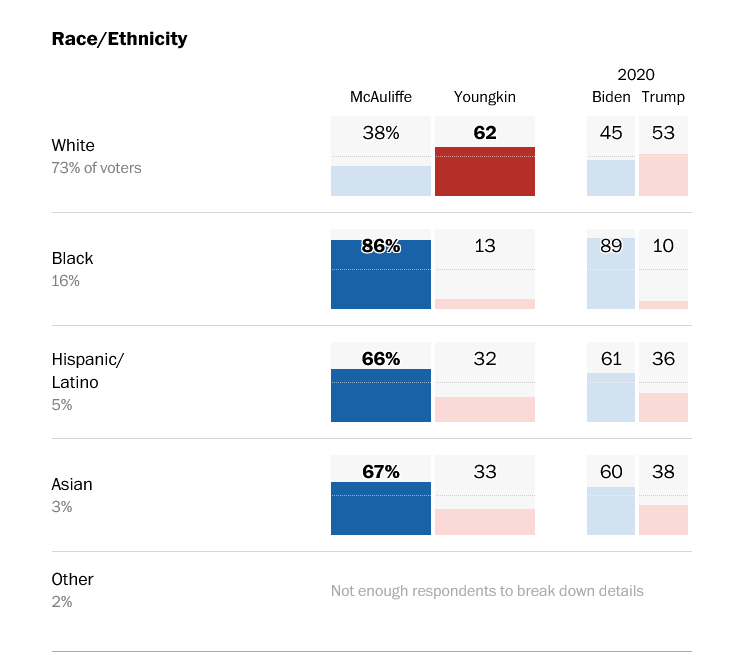 If those polls are right, McAuliffe bested Biden’s 61% of the Hispanic vote in 2020.

The gubernatorial race in deep blue New Jersey was also intriguing. Republican challenger Jack Ciattarelli gave incumbent Democrat Phil Murphy a run for his money. Murphy won by an unimpressive margin of 50.8–48.3 margin. No exit polls are yet available for New Jersey thus far; some indicators show an Hispanic drift toward the GOP in 35 percent Hispanic Passaic County. Those data are inconclusive.

But back to Virginia. I believe that Republicans likely made gains with Hispanics because Democrats have become the de facto “black party,” and the Democrat-sponsored lockdowns disproportionately hurt service workers, a heavily Hispanic sector of the economy. All things considered,  though, at best, Republicans likely grabbed between 37–42 percent of the Hispanic vote.

Researchers such as Matt Barreto, the president of BSP research and the Faculty Co-Director of UCLA’s Latino Policy and Politics Initiative, cast doubt on the Virginia polls that showed Republicans winning Hispanics.

“The so-called exit poll that Fox News is promoting has a clear Election Day bias and way too large of a Republican sample,” Barreto remarked [What’s up with Virginia’s Latino Vote?, by Sabrina Rodriguez and Marc Caputo, Politico, November 4, 2021].

New research from @UCLAlatino estimates that 78.1% of #Latinos voted NO in the CA #recall. Contrary to predictions that Latinos could be a key vote in defeating Newsom, very high support for @GavinNewsom among Latinos remains broadly unchanged from the 2018 election. (1/3) pic.twitter.com/ayiVHrfjWh

Nevertheless, something more insidious is at work with respect to overly optimistic data circulating among Stupid Party Strategerists. The pundit class has a vested interest in diversity pandering, and they will use whatever results they can find to justify their minority outreach programs.

Using misleading results, they can also justify purging the party of immigration-restriction sentiments and greenlight more futile minority-outreach. As myriad VDARE authors have noted, whites came out in force in Virginia to stop McAuliffe and his gang of leftists.

If anyone should receive credit for putting Virginia in the red column, it’s white voters, especially rural voters, who were fed up with anti-white indoctrination in public schools, the erasure of American history, and the abysmal economy that Democrats have created. Don’t expect GOP leaders to ever give those voters their due.

Youngkin’s gains in the suburbs is an important and much discussed part of the story, but even more important and overlooked is the fact that rural white voters turned out in force and voted monolithically.

See those deep red counties in the west? He won 80-95% of votes there pic.twitter.com/uPISB2FWYY

The recent results from Virginia demonstrate that any serious Republican electoral strategy consists of vigorously catering to whites via the Sailer Strategy; i.e., promoting immigration restriction and policies that disproportionately benefit white voters. This same strategy can and should be applied to other states with sizable white electorates.

We must always remember that whites founded the United States, which should be governed in their interests. Any efforts to divert attention, resources, and time away from white voters toward non-whites is not only a waste of time and resources, but also a slap in the face to the people who built this country.

Conservatism, Inc. exit polls must be ignored, and the prevailing strategy should be the one that this website has advocated for two decades. That means focusing on the National Question, which includes pushing public policies that motivate white voters to vote, like cracking down on black crime and stopping taxpayer support for anti-white propaganda.

The Right’s political strategy and tactics must advance white interests. Everything else is an unproductive waste of time that creates make-work jobs for diversity hustlers in the GOP at the expense of the Historic American Nation, which needs and wants a government that puts them first.