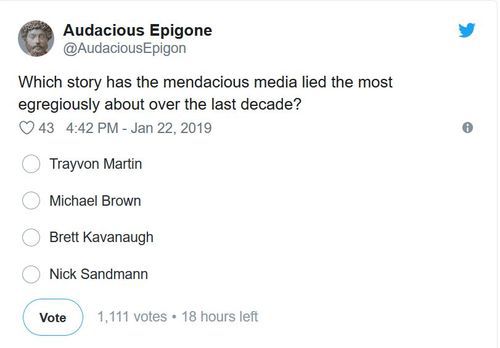 They are incorrigible. There is no reformation, only destruction–theirs or ours. After total Narrative Collapse, the bloodthirsty lunatics tried to rally around this:

The earlier footage of Native American veteran Nathan Phillips being mocked by Trump supporters is so much worse. pic.twitter.com/U2EcFAoYoC

After over an hour of high school kids being racially taunted and called aspiring serial killers, a different group of adults accosts the kids to drown out their Catholic school spirit songs. The kids put on brave faces to show they’re not intimidated–some by exaggerated dancing to primitive animist "music", others with the shit-eating grins that drive POCs and blood libelers into genocidal furies (I’m working on perfecting mine–my grin, I mean!)–and the cultMarx mob calls for their deaths.

Obviously if a group of white men spent an hour harassing a group of black kids by calling them crack cocaine drug lords and dumb niggers, and then more adults got up in the black kids’ faces as they were singing church songs to drown out the verbal abuse, the media wouldn’t be obsessing over whether or not one of the black kids scoffed in response! To even point out the absurd double standard feels cucky. It’s not a double standard. There is a single standard in place, and it is clear–whites are irredeemably evil and deserve POC boots stamping on their faces forever. That’s it.

If the video gave you second thoughts about whether or not to stand behind the young Templars, you’re part of the problem, fellow white person! It betrays a willingness to accept nothing other than the unconditional surrender of whites in any confrontation with non-whites. Stop it. You’re digging your posterity an early grave.

Fortunately, the attempted regrouping over subsequent videos has been entirely unable to stop what has turned into a total rout. It’s worth pondering how many times throughout history the lying media has reported false stories that make it into the historical record as truth because the kind of technology that today allows their lies to be exposed didn’t exist then. I suspect Sandmann’s Stand will take its place alongside the Kavanaugh calumnies, the hands-up-don’t-shoot hoax, and the mendacity surrounding Martin as one of the biggest red-pilling events of the last decade. Gen Z will be especially galvanized by it:

Trump, sensing blood in the water, has reportedly invited the Covington kids to the White House (yes, Asian Mark Wahlberg, we memed it into existence!). The contrast with Obama bringing in the fake inventor, fake American, and thoroughly fraudulent clockboy could not be starker. It was a national disgrace. Bringing in intelligent, self-assured heritage Americans to broadcast those triggering smiles across the country will be a moment of national glory.