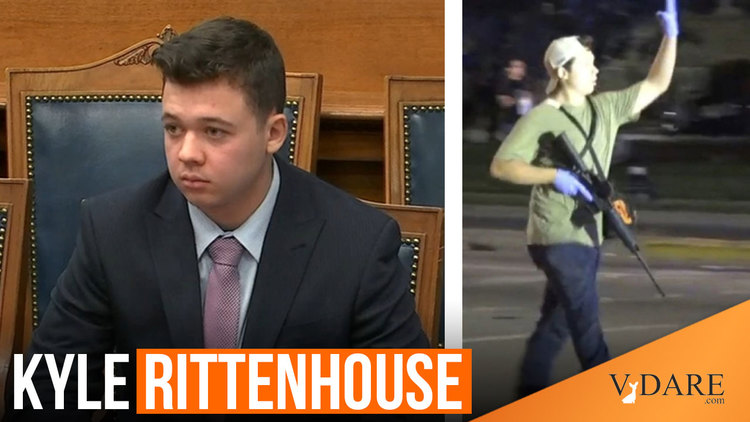 Ann Coulter: Left Trying Get Rittenhouse Like They Got Proud Boys, So NO ONE Will Dare Resist Them

Earlier by Ann Coulter On The Proud Boys: "America’s Last Line Of Defense Against The Left’s Fascistic Antifa Storm Troopers"

In his prosecution of Kyle Rittenhouse, Kenosha County Assistant District Attorney Thomas Binger drew so many well-earned rebukes from the judge that some speculated he was intentionally going for a mistrial.

Nope. He was fighting like a banshee. He just has a really bad case.

Of course, it was his own decision to charge the then-17-year-old Rittenhouse with murder for shooting three psychopathic criminals who were attacking him at the BLM/antifa riots in Kenosha last year. (That, by the way, is a more accurate summary of the evidence than anything Binger said.)

In his closing argument, Binger decided to ignore his loser case and argue an entirely different case, for which no evidence had been adduced. Binger posited that Rittenhouse was an “active shooter”—like at Sandy Hook Elementary or Marjory Stoneman Douglas High School.

Forget that Rittenhouse was not at a grade school, but in the middle of a riot that did $50 million in damage to the town of Kenosha. Forget that rioters were beating up random people they encountered, including a 71-year-old man protecting a mattress store from being looted, who had his jaw and nose broken by a water bottle filled with concrete—hurled by “unarmed” protesters.

Name one “active shooter” in history who strolled about with a gun for hours, not shooting anyone—until he was chased, cornered and assaulted. Rittenhouse had a gun not because he was violent, but because the “protesters” were, as the evidence abundantly demonstrated.

But according to Binger, the collection of mental patients, domestic violence offenders and pedophiles attacking Rittenhouse were “heroes,” just trying to stop the “active shooter”!

“I want you to keep in mind that we’ve all read stories and heard about heroes that step in to stop an active shooter, or to give their life to save others. In fact, many people in Wisconsin went out and got carry and conceal weapon permits just so that they could be there in case there was an active shooter, and wanting to stop them.”

Yes, apparently Joseph Rosenbaum, Anthony Huber and Gaige Grosskreutz were in Kenosha that night to feed the hungry and minister to orphans when, out of nowhere, Rittenhouse—WHO ONCE POSTED SOMETHING JUVENILE ON TIKTOK!—decided to start randomly shooting innocents!

If Binger had tried to introduce—what do we call it again?—evidence that the men attacking Rittenhouse were Boy Scouts doing good works, the defense could have introduced the bales of evidence that were being withheld from the jury. The colorful backgrounds of Rittenhouse’s assailants were properly kept out of evidence, inasmuch as he wouldn’t have known about their multiple prior crimes when he shot them.

But it’s pretty sleazy for a prosecutor to rely on the jurors’ ignorance of excluded evidence to paint a picture he knows to be false of the men who attacked the defendant and their pure-as-snow motives.

The first degenerate criminal Rittenhouse shot, Joseph Rosenbaum, out on bond for domestic battery, had been released from a mental institution that very day. He was a convicted felon—for anally and orally raping five boys ranging in age from 9 to 11 years old.

Luckily for Binger, the jury was not told any of that. So he was free to fantasize about the humanitarian impulses surging through the pedophile mental patient when he lunged at Rittenhouse, shouting “F**k you!” (attested to by two witnesses). Rosenbaum,Binger told the jury, was only trying to “stop the defendant from pointing his gun or shooting anyone.”

Yes, and then he planned to collect alms for the poor.

So concerned was Rosenbaum with keeping everybody safe that he screamed at the defendant and other armed civilians, “If I catch any of you f****** alone, I’m going to f****** kill you.” (That’s according to two witnesses at trial.)

Anthony Huber, who swung a skateboard at the head of the fallen Rittenhouse, was also a convicted felon for two separate instances of domestic violence, including holding a knife to his brother’s stomach and threatening to “gut” him “like a pig.”

But the prosecutor made damn sure that the jury would never hear about that, not asking a state witness about Huber’s character, specifically in order to prevent the defense from introducing evidence of his violent crimes. This allowed Binger to tell the jurors in closing that Huber was merely “trying to be a hero and stop an active shooter and protect others.”

Gaige Grosskreutz is the one who admitted under oath that Rittenhouse didn’t shoot until Grosskreutz pointed a Glock at his head. (“Admitted” in the sense of: There was video, so to say otherwise would have been perjury.)

Grosskreutz is a career criminal with police records for domestic abuse, prowling, trespass, two DUIs, felony burglary and two charges of carrying a firearm while intoxicated. All this was kept from the jury. Assured that jurors had no knowledge of Grosskreutz’s anti-social past, Binger told them that when Grosskreutz chased Rittenhouse and pulled a gun on him, he was “running to try and help.”

The deranged individual called “Jump Kick Man,” who did a dropkick directly at Rittenhouse’s head, was never identified so, sadly, his undoubtedly exciting rap sheet is unavailable.

But he’s a hero too!

Here’s Binger’s version of the freaks and felons making near-simultaneous runs at Rittenhouse, as he sat, where he’d fallen, in the middle of the street:

“And that crowd was full of heroes. And that crowd did something that honestly I’m not sure I would’ve had the courage to do. If I see a guy running up the street with an AR-15 and I hear he just shot somebody, my first instinct is not to approach. Anthony Huber was different. Jump Kick Man was different. Gaige Grosskreutz was different.”

This is the prosecutor calling stranglers, burglars and elderly abusers “heroes”!

The only monster in this sea of angels, according to Binger, was Rittenhouse. The prosecutor alerted the jury to Rittenhouse’s sick and dark past: His TikTok account has the profile name “4doorsmorewhores” and the tagline, “Bruh, I’m just trying to be famous.”

I repeat my admonition to white kids NOT to listen to rap or hip-hop or adopt any aspect of black gangsta culture. It will only get you in trouble. On the other hand, there’s no evidence Rittenhouse violently attacked family members, burgled homes or raped little kids. (At the same age, Grosskreutz was beating up his grandmother. That’s the prosecutor’s “hero.”)

Democrats are defunding the police, destroying officers’ lives whenever they try to arrest a black man who’s not in the mood, and installing prosecutors who refuse to bring charges against violent, marauding lunatics.

The left has already crushed the Proud Boys. They’ve been publicly “disavowed” by loyal, dependable Donald Trump. (He’s definitely got your back, Deplorables!) Two sit in prison in New York for whupping antifa butt—after they were attacked. Since then, the Proud Boys have been forced into quiescence because, out of 30,000 members, a few dozen turned up at the Capitol on Jan. 6—as civilians, not Proud Boys, which had officially directed members to stay away from D.C. that day.

Any positive comment about Rittenhouse on Facebook, Instagram or Twitter led to an immediate suspension. GoFundMe refused to allow Rittenhouse’s friends to raise money for his defense. People who did contribute were hunted down, doxxed and fired. The same people who wanted to give Guantanamo war criminals civilian trials think an American who refused to acquiesce in his own murder didn’t deserve legal representation.

Kyle Rittenhouse is on trial so that no one will dare stand in the way of the left’s shock troops ever again.