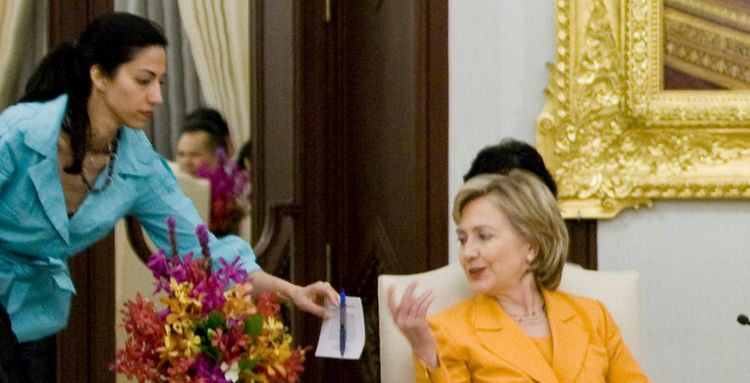 Michele Bachmann Is Right. The GOP Leadership Are Wimps. Ed Rollins Is A Weasel.

On June 13, 2012 Congresswoman Michele Bachman sent a "Letter to the Deputy Inspector General" [PDF] asking for an investigation of how individuals with links to the Muslim Brotherhood had obtained security clearance. She gave an example:

According to The Muslim Brotherhood in America: The Enemy Within, a product of the Center for Security Policy, the Department’s Deputy Chief of Staff, Huma Abedin, has three family members—her late father, her mother and her brother—connected to Muslim Brotherhood operatives and/or organizations.

Her move was coordinated with other lawmakers, according to Glenn Beck’s The Blaze:

“Reps. Trent Franks, Louie Gohmert, Thomas Rooney and Lynn Westmoreland, and was simultaneously sent with similar letters to the Office of the Director of National Intelligence, the Department of Defense, theDepartment of Homeland Security, and the Department of Justice.”

But it made everyone go crazy. It’s like the McCarthy Era all over again!

And by “McCarthy Era,” I really mean “Anti-McCarthy Era”—since the story of McCarthy is the story of a man trying to fight communism in the Democratic Administration and being ganged up on by the entire MSM of the 1950s, his Democratic opponents, and his own party.

You really need to read Blacklisted by History: The Untold Story of Senator Joe McCarthy and his Fight Against America's Enemies by M. Stanton Evans for the details.

And you have to remember a critical point. In court, someone accused of crime is innocent until proven guilty. But for purposes of security clearance, everyone is untrustworthy until proven trustworthy.

This distinction was systematically ignored by McCarthy’s critics. It was underscored powerfully by the young, undegenerate William F. Buckley in his book McCarthy and His Enemies, co-authored with L. Brent Bozell.

Misunderstanding this elementary distinction also underlay the Wall Street Journal’s James Taranto and Ron Unz’s  spluttering when I supported American Airlines’ querying an Arab-American presidential bodyguard back in 2002. (Which reminds me, did they catch the news about Fort Hood shooter Major Nidal Hassan?)

Of course, in today’s news, if you Google “Huma and McCarthy Era” you get the received version of McCarthyism.

The best example of this was an unsigned editorial in the LA Times, which began:

In the 1950s, Sen. Joe McCarthy and other paranoid anti-communists saw Reds under the bed — and in the State Department. Today a fringe group of conservatives believes similarly that Islamic fundamentalists have infiltrated the deepest recesses of the American government. In refuting such an aspersion made by Rep. Michele Bachmann (R-Minn.) against a State Department official, Sen. John McCain (R-Ariz.) has struck a profile in courage that should encourage other conservatives to distance themselves from crackpot conspiracy theories.”

The Houston Chronicle carried this same editorial under the title Another Voice: McCain's profile in courage.

Apparently these people have forgotten that McCain is a “maverick”—meaning a weasel who will always betray his party for the sake of this type of sycophantic press coverage.

The LA Times editorial quotes John McCain who said, on the Senate floor, that  questions about Abedin's loyalty

have no logic, no basis and no merit, and they need to stop now. I have every confidence in Huma's loyalty to our country, and everyone else should as well.

It also quotes the almost equally weaselly John Boehner,  who said: "Accusations like this being thrown around are pretty dangerous."

The man who wins the weasel prize, though, is former Bachmann campaign advisor Ed Rollins. (Rollins has won this prize repeatedly during his career.) He wrote:

I have been a practitioner of tough politics for many decades. There is little that amazes me and even less that shocks me. I have to say that Congresswoman Michele Bachmann’s outrageous and  false charges against a top aide to Secretary of State Hillary Clinton, Huma Abedin reaches that threshold.

Her unsubstantiated charge against Abedin, a widely respected top aide to Secretary  Hillary Clinton, accusing her of some sort of far-fetched connection to the Muslim brotherhood, is extreme and dishonest.

Having worked for Congressman Bachman’s campaign for president, I am fully aware that she sometimes has difficulty with her facts, but this is downright vicious and reaches the late Senator Joe McCarthy  level. (Joe McCarthy falsely made claims that there were large numbers of Communists and Soviet spies inside the State Department in the early 1950’s. On December 2, 1954, the Senate voted to "condemn" McCarthy on two counts.)

Note that an alleged “Conservative Republican” campaign consultant is here parrotting the Left’s view of McCarthy—vindication of Paul Gottfried’s fiercely-asserted view that Conservatism Inc. has been fatally co-opted.

Of course, none of these people really have any standing to vouch for Abedin—a Muslim of South Asian descent, raised in Saudi Arabia, although born physically in Kalamazoo, Michigan.

Sure, McCain may have seen “Huma” working in the Senate for years. But a foreign agent would hardly fess up to a Republican Senator. Heard of Alger Hiss?

Again, you don’t have to actually be an agent to be a security risk. You just have to have possibly divided loyalties—a point with which the political class, thanks to “Anti-McCarthyism”, has  lost touch.

The loyalty issue is so far under the radar that, as early as 1992, when FBI agent Gary Aldrich was vetting Bill Clinton’s staff, when he’d ask them what the FBI calls the “loyalty question,” they’d immediately say they were loyal to Bill and Hillary! [Unlimited Access, Page 115] Aldrich had to explain that he wasn’t asking that, he was asking about things like loyalty to the country, the flag and the constitution.

I first heard of Huma Abedin when Hillary Clinton was running for the Democratic nomination. She was Hillary’s “Body person,”  a role described by Spencer Morgan in the New York Observer as “industry-speak for the catchall role of an omnipresent traveling assistant.” [ Hillary’s Mystery Woman: Who Is Huma?, April 2, 2007.] Their relationship was so close that there were rumors that Abedin was Clinton’s girlfriend. [Hillary & Huma – A Dark Unseen Scandal Star?, October 30, 2007, by Luke Ford]. Even the Muslim agent rumor is not new. Steve Sailer blogged in 2007:

But, now I've finally heard (from Mickey Kaus) about Hillary's "body person," the ineffably lovely Huma Abedin. Is Hillary's Saudi-raised scheduler, who is of South Asian Muslim descent, a deep plant of the Saudi intelligence service sent undercover with Hillary? Who knows?

If Abedin is a Muslim with parents from Pakistan, and was raised Saudi Arabia, she is ipso facto a security risk (Saudi Arabia and Pakistan are both nominal allies of the US—very nominal, since the Saudis produced Osama and most of the 9/11 hijackers, and Pakistan was found to be sheltering him.)

And now Adedin is an aide to the Secretary of State of the United States of America.

Weirdly, Abedin is also the wife (still) of scandal-plagued ex-Congressman Anthony Weiner. (See Weiner's Woes: No Skillz To Pay the Billz, by Michelle Malkin, June 16, 2011). I say “weirdly” because Weiner is Jewish, and Abedin is Muslim. This is legal in America, but unusual. In Pakistan and Saudi Arabia, it’s illegal, and sometimes the cause of honor killing.

Maybe Abedin is a totally Americanized modern woman, and married Weiner out of the same foolish impulse that presumably led Hillary to marry and “stand by” Bill Clinton. Or maybe she’s in deep cover. Or maybe something else.  But it’s entirely reasonable to ask.

In any event, I advise the couple to steer clear of family reunions in Saudi Arabia.

It’s a comment on contemporary elite debate that the scandal is not that a Saudi-connected Muslim is so close to the Secretary of State—but that a conservative congresswoman has dared to question it.

I hope that aides to the Secretary of State are subject to FBI background checks. But we haven’t seen them. And none of the pious Republicans, including Jim Sensenbrenner, who are defending her have either.

Nor are they asking to see them. They’re assuming innocence, or rather trustworthiness, since Bachman isn’t accusing Abedin of a crime—just wondering how someone with apparent family connections to the Muslim Brotherhood got a security clearance.

Personally, I think that both Barack Obama and Hillary Clinton can be depended on to do the wrong thing for America without outside influence.  What Barack Hussein Obama calls his “Story of Race And Inheritance” means that he’s unlikely to seek what’s best for America in any conflict with any Third World Country, Muslim or not.

The real loyalty risks in this story aren’t Muslims, they’re Republicans—McCain, Boehner, Sensenbrenner, et al. Those are the people who can’t be trusted.

Pro-Arab pundit Juan Cole asks, foolishly, Could Michelle Bachmann cost Romney the Presidency?  [JuanCole.com, July 23, 2012] That’s because Cole thinks there’s an Arab-American vote in the swing states that was going to vote GOP, but will turn away because of Bachman’s bigotry. There are no doubt GOP bigwigs who believe the same thing. It’s not that much stupider than their pandering to the Hispanic vote.

However, in a story called Michele Bachmann finds plenty of friends back home [By Jake Sherman, July 23, 2012] The Politico reports that normal Americans, of the kind who vote Republican, actually like Bachmann—and don’t like (or trust) Muslims:

"But the Northeast corridor’s stunned disbelief at what it saw as a loony conspiracy theory is replaced with hollers of support among Bachmann’s many devoted fans here in the exurbs north of the Twin Cities that she represents."

That was true during the “McCarthy Era” as well.

The loyalty or otherwise of Huma Abedin may not do much harm to America.

The treachery, cowardice and stupidity of the top Republicans, including Mitt Romney, will do a lot more.