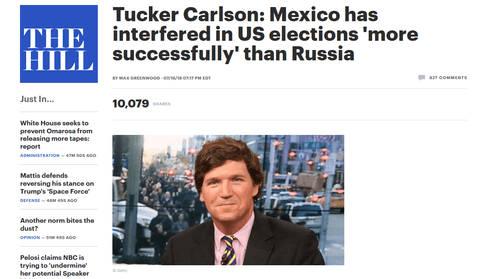 Anyone who has glanced at a newspaper in the last two years knows Russian meddling is a big issue for the Never Trumpers. Globalist neocon Max Boot—who announced that “The Republican Party is dead”  in the LA Times, May 8, 2016 and quit the party the day after Donald Trump won [I left the Republican Party. Now I want Democrats to take over, by Max Boot, Washington Post, July 4, 2018] has flatly stated that Trump needed the Russians to win.

While the intelligence agencies are silent on the impact of Russia’s attack, outside experts who have examined the Kremlin campaign—which included stealing and sharing Democratic Party emails, spreading propaganda online and hacking state voter rolls—have concluded that it did affect an extremely close election decided by fewer than 80,000 votes in three states. Clint Watts, a former FBI agent, writes in his recent book, “Messing with the Enemy,” that “Russia absolutely influenced the U.S. presidential election,” especially in Michigan and Wisconsin, where Trump’s winning margin was less than 1 percent in each state.

Of course, we ought to stop any foreign meddling in our elections. But it’s funny how concerned today’s Leftists now are about Russian intervention. Back in the 1980s, the “Lion of the Senate,” Sen. Ted Kennedy, tried to collaborate with the Russians to prevent Reagan’s re-election. It never hurt his standing in the Democratic Party or in the Mainstream Media [Ted Kennedy Made Secret Overtures To Russia To Prevent Ronald Reagan’s Re-Election , by Kevin Mooney, The Daily Signal, December 14, 2016].

Oh, that’s right. The Russians were commies back then. The Democrats were never this hysterical about them at the height of the Cold War, or during the Vietnam or Korean wars, or during the Ames, Hanssen or Walker spy scandals.

The real effect of Russian meddling on the 2016 election is way overblown. Leftist Russian scholar Stephen Cohen, in a YouTube appearance with Boot, called it “low level stuff.” ["You are Criminalizing Diplomacy", July 30, 2018] The Russians didn’t create the divisions in our deeply-divided country.

And Russia’s capabilities pale in the face of another country that has a long-term asset: demography. That country is Mexico.

Mexico most certainly meddled in the 2016 election and in every other aspect of U.S. politics. Yet nobody in our government, including GOP lawmakers, seemed to care.

One example: is that self-described “faithful, conservative leader” Senator James Lankford, from my own state of Oklahoma’s notoriously useless GOP delegation, a big defender of the DREAMers. He’s been fretting that Russian internet trolls were pouring coals onto the fire when black NFL players began kneeling during the national anthem.

“We watched, even this weekend, the Russians and their troll farms, their internet folks, start hashtagging out #TakeAKnee and also hashtagging out #BoycottNFL,” Lankford, who sits on the Senate Intelligence Committee, said during a hearing on threats faced by the United States.

“They were taking both sides of the argument this weekend ... to try to raise the noise level of America and make a big issue seem like an even bigger issue as they are trying to push divisiveness in this country,” Lankford said.

It’s almost as if our lawmakers and media don’t think Mexico is a real country. Or treat it like one.

Yet with Mexican meddling, we’re not just talking about an election. Mexicans meddle culturally, politically, diplomatically and demographically. They constantly work to win or maintain the loyalty of Mexicans and Mexican-Americans in the United States. And it’s not just Mexican government officials, but journalists, celebrities and business magnates.

As well, Mexico operates the biggest consular network in the world on American soil. It maintains no less than 50 consulates.

The heroic Tucker Carlson of Fox News recently raised what we at VDARE.com have been discussing for years. On Fox’s “The Five,” he said:

“I don’t think Russia is our close friend or anything like that,” Carlson said. “I think of course they try to interfere in our affairs. They have for a long time. Many countries do. Some more successfully than Russia, like Mexico, which is routinely interfering in our elections by packing our electorate.”

Tucker Carlson: Mexico Has interfered In US Elections ‘More successfully’ Than Russia, by Max Greenwood, The Hill, July 16, 2018.]

His comments provoked an indignant reaction at CNN.com by Raul A. Reyes, “an attorney and member of the USA Today board of contributors.”

When in doubt, blame brown people. That’s what one leading voice on the right is doing in response to the fallout over President Donald Trump’s disastrous summit with Vladimir Putin in Helsinki, Finland. In an interview with “The Five,” Fox News host Tucker Carlson said that Russia had sought to meddle in US affairs. But he asserted that other countries, such as Mexico, have been more successful in doing so …. This is Carlson's attempt to deflect attention from the national outrage over Trump casting doubt on the US intelligence community's determination that Russia meddled in our 2016 election …. [T]there is no evidence to support Carlson's claims… . Carlson seems to be crossing a line by suggesting that the true threat to American democracy is not Russia or Putin's agents but Hispanic voters. This is an astonishing claim…. Carlson made his comments about Mexico influencing our elections without citing any data to back it up.

Of course, Carlson didn’t “blame brown people.” But “no evidence”? Mexican meddling is an enormous, ongoing political operation that dwarfs anything the Russians have tried.

I've written about this for years:

And four pages of posts and articles tagged “Mexican Meddling.” 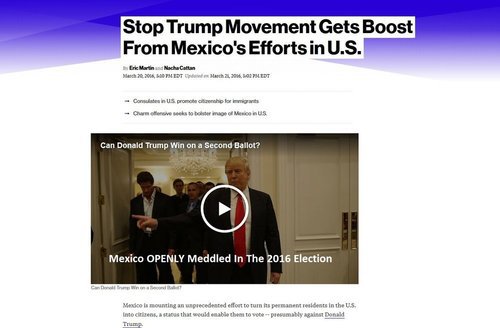 In February of this year, Steve Sailer dug up  this MSM story of open foreign meddling in the 2016 election:Stop Trump Movement Gets Boost From Mexico’s Efforts in U.S., By Eric Martin and Nacha Cattan, Bloomberg News, March 20, 2016.

The Mexican government explicitly attempted to prevent a Trump triumph by pushing dual citizens to vote against him. (Dual citizenship wasn’t even permitted by Mexican law until recently. The goal, as I explained in 2003, was advancing the interests of Mexico by permitting the dual citizens to vote in both countries).

After Trump became a candidate in 2015, Miguel Basanez was appointed the new Mexican ambassador to the U.S., instructed by President Enrique Peña Nieto, known as EPN, “to broaden the opportunities of our nationals on both sides of the border.” In an interview with el Universal, Mexico’s paper of record, Basanez explained the challenge to the Trump campaign. As I reported at the time, Basanez estimated the “Mexican-origin population” here at about 38 million, including non-citizen immigrants (legal or illegal), naturalized citizens and even American-born U.S. citizens of Mexican ancestry. The entire “Hispanic population” estimated Basanez, would be about 58 million. So “we are a quite powerful segment,” he boasted. “Those who can participate and influence are the Americans or the Mexicans who have dual nationality and can vote.”

In December 2015, speaking Spanish on American soil, Basanez announced a plan to get three million Mexicans in the U.S. naturalized so they could vote in the 2016 election!

That’s what Carlson was talking about.

Examples of Mexican meddling in the 2016 election abound. That August, for instance, the largest Spanish-language newspaper in the U.S. published an article by a Mexican diplomat headlined “Trump must be stopped.”

The time will come when we are asked the inevitable question, “And you, what did you do to stop Trump?” The answer, that we must give to our children, our community and ourselves, depends upon each one of us. In October 2016, a Mexican governor visited California and openly campaigned against Trump, calling him crazy, and telling Mexicans and Central Americans not to vote for him. The GOP, naturally, did not object.

And of course, Mexican showbiz elitists also got into the act. Famed Mexican singer Vicente Fernandez recorded a pro-Hillary song (see here, here and here). Hillary Clinton actually met with this foreigner to thank him. Fernandez called her “the next president,” and she replied, “thank you for your help in doing that.”

Also during the campaign, Mexican rock band Mana told concertgoers on U.S. soil that “We Latinos are more than 50 million in this country and so we invite them to go out and vote and rescue the Latinos and show our power in this country.”

Since Trump’s triumph, Mexico has continued to play the dual citizenship card. In 2017, for example, Carlos Slim, Mexico’s wealthiest man, was sponsoring workshops on U.S. soil to help naturalize Mexicans yet retain their Mexican citizenship.

And how about those “DREAMers?” They can’t be deported, we are told, because they have no links with their home country. They came here too young. But the Mexican government doesn’t see it that way. It has worked to organize DREAMers and has taken them back to Mexico to reconnect with their roots. If they are reconnecting, why can’t they move back permanently?

Mancera also talked up Casas Mexico, safe houses on U.S. soil, according to Excelsior, which are intended to “help the fellow Mexicans who are affected by the anti-immigrant policies implemented by the government of Donald Trump.” [En Texas, indocumentados mexicanos afirman: 'Tememos salir a la calle' Excelsior, May 21, 2017]

The Illinois Senate was so pleased with Mancera’s defense of migrants they gave him a plaque.

Carlson is right. Mexico has meddled much more successfully in the United States than Russian ever did. Or could.

Yet nothing is done. No reprimand. Not even a tweet from President Trump (yet?).

Mexican meddling must be stopped. Kudos to Carlson for acknowledging it.