On the other hand, Hillary apparently has no problem with Mexican intervention to help her in the election. 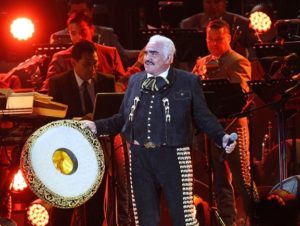 As I’ve reported before, the Mexican government, through its vast consular network, has been working to get Mexicans in the U.S. naturalized as American citizens so they can vote against Trump. Even the Mainstream Media has noticed this.

Hillary herself, after the latest debate, received Mexican singer Vicente Fernandez backstage, and thanked him for recording a song calling on Latinos in the U.S. to vote for her in the U.S. election. I wrote a Said in Spanish article which discussed his song.

Here’s a video of the song itself:

So here you have a Mexican citizen singer (Vicente Fernandez), recording a song (financed by the U.S. Latino Victory Project organization), calling on U.S. Latino voters to vote for Hillary and against Trump.

“I loved your song” gushed Hillary.

Hillary’s reply: “Thank you for your help in doing that”.

So she’s thanking a foreigner for helping her win the presidency. How about that?