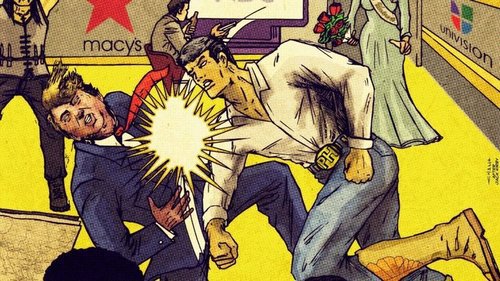 They can’t help it. From soccer to comic books, Mexicans still can’t help but show how triggered they are by Trump. Unfortunately for them, their attacks on The Donald seems to show the wisdom of his immigration policies: both the Mexican government and many Mexican-Americans clearly think America already belongs to them.

In case you didn’t know, Mexico and the United States will play each other October 10 at the Rose Bowl. Since it’s in California, we can expect the Americans will be dealing with a hostile “home” crowd who may boo the national anthem again.

Interestingly, the ad essentially agrees with Trump’s message about America not having victories and the American dream being dead. It simply uses Trump’s statements to mock the USA for a predicted defeat at the hands of Team Mexico.

Trump as a Villain in Video Games and Disney Parodies

Other sites are morphing Trump into a succession of Disney villains (Disney characters are very well known in Latin America) [Transforman a Trump en villanas de Disney, El Universal, September 1, 2015]. This particular site is Mexican, but the original is apparently from Venezuela.

Explicit threats of violence against Trump are also appearing—for example in a comic book called “El Peso Hero.” It was created by an elementary school teacher, Hector Rodriguez. He teaches in Dallas, Texas but seems to be filled with a great deal of hatred and contempt for the country in which he resides. The cover of the comic book’s July Issue has the Peso Hero punching Donald Trump. Here, “El Peso Hero” is punching Trump in the face, with the pose precisely modeled on the 1941 cover image of Captain America punching Adolf Hitler. Not too subtle (or original).

According to Kierran Petersen of Public Radio International

Until now, Rodriguez has kept the focus of El Peso Hero on social and human rights issues. Back when he first started the series, he was motivated by the desire to give his students a Spanish-speaking superhero to look up to. But with this new cover, his series takes on a political bent.

[Trump takes it on the chin in Mexican superhero's latest adventure, July 18, 2015]

"We're being threatened by someone who could possibly be in a position of authority, molding and dictating policy in the United States," Rodriguez says. "I think it was our responsibility to counteract with an artistic piece — with the Mexican superhero."

Despite his residence in Dallas, Rodriguez says “we” are being threatened. And by “we,” he doesn’t mean Americans.

Rodriguez goes on to say he was “personally offended” by Trump because Rodriguez’s grandfather was an illegal. But what this really shows is that even having multiple generations of his family in America have done nothing to change what Rodriguez sees as “his” country.

And it’s that kind of sentiment the Mexican government is counting on. Mexico has a new Ambassador to the United States, ready to continue the long tradition of meddling in American affairs. Ambassador Miguel Basanez Ebergenyi (his maternal surname is Hungarian, and quite common in Mexico) gave an interview published in El Universal, Mexico’s paper of record, on September 6.

If we think of the Mexican-origin population in the U.S., we are talking about 37 or 38 million , and if we add the rest of the Hispanic population, there are 57 or 58 million. We are a quite powerful segment, and this speaks of how the societies have been inter-relating.

Fifty-percent of Mexican families have a relative living or working in the U.S. This social part is very important.

Since half the Mexican population has relatives in the U.S., this provides a powerful incentive to take the part of illegal aliens in any immigration dispute. It also makes it easier for more Mexicans to emigrate to the United States.

In every part of the world there are extreme expressions, intolerant, racist, xenophobic, and they should be denounced, they shouldn’t be ignored, but neither should they be exaggerated in that sense that in the case of the United States they are beginning their internal political process.

In other words, let’s be careful about how we meddle.

We must be attentive, but as Mexicans we can only be observers.

Does that mean they won’t meddle? Well, he also says,

Those who can participate and influence are the Americans or the Mexicans who have dual nationality and can vote….

Again, this is a clear indication from a Mexican government official that Mexican-Americans with dual citizenship are expected to vote in American elections for the interests of Mexico.

Why don’t Republicans care about this?

Basanez was approved by the Mexican senate on September 2, and on September 7 (coincidentally, during Texas Governor Abbott’s visit) was given his instructions. According to Excelsior:

President Pena Nieto met last night with Miguel Basanez Ebergenyi, Mexico’s Ambassador to the United States, and entrusted him with the mission of defending the national interest and the rights of Mexicans in that country.

Basanez was told his objective was “to broaden the opportunities of our nationals on both sides of the border.”

This is a fairly explicit statement by the government of Mexico that it expects to exercise jurisdiction over Mexican-Americans.

Of course, this means that Mexican anchor babies in the U.S. should not be American citizens? After all, the Mexican government is claiming “jurisdiction” over them.

Donald Trump ought to add this little fact to his repertoire. After all, he’s already being attacked because Latin Americans think acting in the interests of Americans is automatically illegitimate.

He might as well give them something else to whine about.