Memo From Middle America | Clintons, Slims, Billionaires Scratch Each Others’ Backs—Americans Get Stabbed In The Back 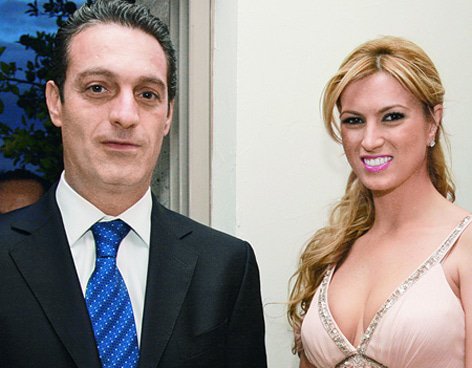 Carlos Slim Jr. was married to longtime blonde girlfriend Maria Elena Torruco Garza in a church in Mexico City’s ritzy Polanco district in October of 2010. Slim is the son of Mexican mogul Carlos Slim, currently the richest man in the world, who not only personally profits from President Obama’s welfare programs, but also champions Open Borders policies that will increase his already stupendous fortune.

Some 2,500 guests attended the Slim wedding reception. It was a Who's Who of the globalist elite. They included former Mexican president Vicente Fox and wife Martha, and then up and coming Mexican governor (and now president) Enrique Pena Nieto. Also in attendance were Mexican media billionaire Emilio Azcarraga and TV host Carlos Loret de Mola Jr. (the son of journalist Carlos Loret de Mola, who wrote a 1982 column hailing a Reconquista of the American Southwest through the “Mexican invasion” of mass immigration.) From the literary world there was Gabriel Garcia Marquez, Colombian author, longtime resident of Mexico, and personal friend and defender of Fidel Castro. (Garcia Marquez has since passed away.)

And—this is the point— this glittering list of contacts included Microsoft mogul and immigrant enthusiast Bill Gates, who is  neck-and-neck with Slim for the position of richest man in the world….and former US President Bill Clinton.

Slim recently had Mark down in Mexico to speak at a big conference, Foro México Siglo XXI. Once there, Zuckerberg dutifully declared that Slim was his new “role model” and “reiterated his support for immigration reform,” aka an Amnesty/Immigration surge.

Another featured guest at Slim’s confab: Hillary Rodham Clinton, who may well be our next President. According to Dolia Estevez of Forbes:

The Clintons are known to be close friends with Slim, whom they call Carlos. Slim has made significant donations [sic] to the Bill, Hillary and Chelsea Clinton Foundation. In 2012, when Clinton was Secretary of State, she invited Slim to the State Department to discuss his work on broadband and digital development. Also in 2012, the former President awarded Slim the Clinton Global Citizen Awards for his leadership in philanthropy during the  Clinton Global Initiative’s annual conference in New York.

Indeed, Bill Clinton is raking in even more millions of dollars for private speeches for Mexico’s governing elite. Again.

At least 10 top Mexican business groups and corporations, both public and private, paid millions of dollars for Bill Clinton to speak at their events between 2002 and 2012, according to a review of the family’s federal financial disclosures published by The Washington Post in June. Over more than a decade, Clinton delivered 14 speeches to 11 different Mexican sponsors. He was paid $3.2 million…With few exceptions, Clinton’s speeches are closed to the news media… Clinton often uses his trips to connect to Mexico’s elite.

But while the Mexican and American elite are scratching each other’s backs, the historic American nation is getting stabbed in the back.

The Amnesty/immigration Surge drive comes from an international financial elite that is not just post-national, but anti-national—and especially anti-American. What can Bill or Hillary Clinton know of conditions South of the Border if they’re spending their time hanging around with the Slims?

When America’s Senator Jeff Sessions spoke out against the Obama Administration’s proposed Amnesty/Immigration Surge, he thundered,

The administration is meeting with the elite, the cosmopolitan set, who scorn and mock the concerns of everyday Americans who are concerned about their schools, jobs, wages, communities, and hospitals. These great and powerful citizens of the world don’t care much about old-fashioned things like national boundaries, national sovereignty, and immigration control — let alone the constitutional separation of powers.

[Sessions’ Address: Don’t Give “Masters of the Universe” Their Amnesty, September 12, 2014]

Mass immigration is simply a successful example of class warfare by the rich against the poor, with the sanctimonious rhetoric about immigrants concealing the reality that open borders is the most regressive policy imaginable. Sessions rightly points out that these pro-immigration plutocrats are exempt from the effects of their own policies and can isolate themselves from soaring crime, deteriorating public schools, and collapsing neighborhoods.

As the latest issue of The Social Contract (Billionaires for Open Borders) shows, it is precisely the most privileged people in the world who control our suicidal immigration policy. The roll of infamy includes familiar names such as George Soros, the Koch Brothers, Mark Zuckerberg, Sheldon Adelson, Paul Singer and Michael Bloomberg.

But what’s worse: even foreign billionaires like Slim have greater control over American immigration policy than American citizens. Slim is one of the owners of the New York Times, which may explain something about the MSM Top Dog’s increased support for immigration treason.

What’s the solution? As Senator Sessions said in his “Masters of the Universe” speech,

Immigration policy is supposed to serve the national interest and the people of the United States, not the interests of a few activist CEOs and the politicians who are catering to them. We have had 40 years of mass immigration combined with falling wages, a shrinking workplace, and exploding welfare rolls….It is time for a shift in emphasis. It is time to get our own people back to work, and our communities out of poverty, and our schools back on their feet.

This kind of populist message can win votes from working class voters of all races. The opportunity is there for whatever politician or movement can seize it.

But who can break with the wealthy donors who seem to control American political parties and policies? (And where are the Progressives who are supposed to care about such things?)

America is essentially under occupation by a class that has nothing in common with the people it rules.

As the partnership between Zuckerberg, Slim, and the Clintons shows, American immigration patriotism isn’t just about standing up to destructive policies. It’s about standing against a parasitical and insulated elite that sees our country as just another resource to be exploited.