There have been heartening signs recently that immigrant displacement of American workers has finally penetrated MSM consciousness. But immigrants don’t merely take jobs Americans can do—they also have another effect: competing down the incomes of those Americans who are still employed.

Back in 1964, Nobel laureate Paul Samuelson wrote in his famous textbook Economics:

After World War I, laws were passed severely limiting immigration. Only a trickle of immigrants has been admitted since then…By keeping supply down, immigration policy tends to keep wages high.

As Professor Samuelson was then willing to say, in a competitive labor market immigrant workers will lower the wages of native-born American workers. No surprise there: If his Economics textbook taught us anything, it is that an increase in supply of any commodity will reduce its price.

But while immigrants lower wages, they also buy goods and services, creating more jobs. The tug of war between lower wages and higher economic growth is key to understanding immigration’s impact on native-born Americans.

The consensus among economists is that immigration’s major impact is distributional: it lowers the wages of native-born workers and raises the income of their employers and other upper-income natives who derive a disproportionate share of income from capital gains, stock options, and other unearned income derived from higher profits.

The difference between what the winners win and the losers lose is called the immigration surplus. It measures the net income gain accruing to native-born Americans as a result of immigration.

In a 2013 paper, Harvard economist George Borjas estimated the immigration surplus to about $35 billion – a mere 0.24% of GDP. Immigration and the American Worker, CIS, April 2013.

This modest surplus is the difference between an enormous $437 billion gain accruing to employers and a slightly less enormous $402 billion wage loss suffered by native-born workers.

The negative wage elasticity implies that immigrant and native-born American workers of similar education and skill levels are substitutes for each other, so that an increase in the supply of one group reduces the demand for, and wages of, the other. To most rational individuals this is a self-evident truth.

The negative wage elasticity is key to the immigration surplus: Borjas writes:

The formula for the immigration surplus contains another important insight: The gains from immigration are intimately linked to the wage loss suffered by workers. Ironically, the United States gains more from immigration the greater the drop in the wage of workers who compete with immigrant labor. This implication is analogous to the result from international trade theory the cheap foreign imports, typically seen as having harmful and disruptive effects on workers in the affected industries, often benefit the importing country.”

No pain. No gain. No problem? Except that the pain from the U.S. immigration surplus resides primarily with native-born American workers, while the gain rests mainly with their employers.

A decade ago Borjas quantified the native wage loss arising from immigration. Among his research findings:

Increasing the Supply of Labor Through Immigration: Measuring the Impact on Native-born Workers, CIS Backgrounder, April 2004

More recently (in 2013) Borjas reviewed the wage impact of immigrants who entered the country between 1990 and 2010. He found that this cohort had reduced the annual earnings of American workers by $1,396—a 2.5% reduction.

After four years of economic recovery, the income gains are still overwhelmingly tilted toward the upper end of the income distribution. A report issued in late September found the share of income received by the poorest fifth of households remained stuck at 3.2% in 2013 – tied for the lowest level on record with data dating back to 1967. Similarly, the income share received by the next 60% of households (45.8%, up insignificantly from 45.7% in 2012) is close to its historic low.

By definition, this implies near-record high income shares received by the richest 20% of households. They garnered 51.0% of all household income in 2013, a smidgen below the record 51.1% set in 2011.

These changes are consistent with an economy in which immigration helps the rich and hurts the poor and middle-class.

Most jobs created in this recovery have gone to immigrants. And those native-born Americans lucky enough to have jobs also face stagnant wages, in part because of competition from low-wage immigrants.

A job is the surest road out of poverty. It should come as no surprise, therefore, that poverty rates for immigrants have fallen significantly during the recovery, while the poverty rate for native-born Americans, albeit lower than that of immigrants, is slightly higher than it was four years ago.

Non-citizen immigrants, a group that includes illegal aliens and new legal entrants, have seen the biggest poverty rate declines in the recovery: 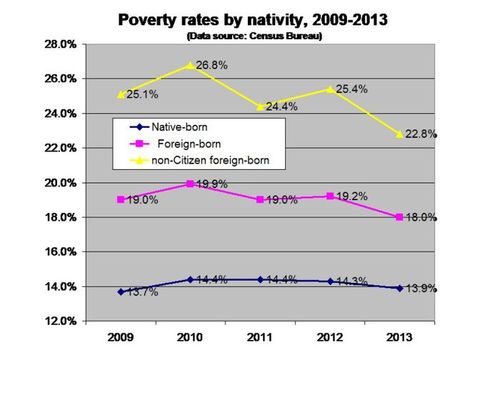 Immigration has always increased U.S. poverty rates. Today native-born Americans are the ones being pushed into poverty by the foreign influx.