Follow the money: it’s an admonition that is doubly true in the illegal alien scramble. Unlike wealthy Mexico (which pretends to be poor to mooch off the US even though it is #14 in national GDP), the Central American countries really are poor.

As a result, Salvador, Guatemala and Honduras love getting checks from their emigres because double digits of GDP in those dirtbag countries come from remittances. This economic information is more proof that the invasive kids are money seekers (acting on the insistence of their parents of course), not refugees from crime as the administration claims. 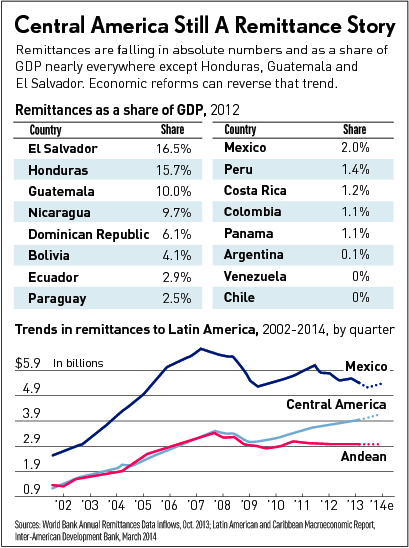 Remittances are an evil system because the money comes too easily and rewards bad governments; the worse political elites run a country, the more its people leave to seek more money in the first world, from which they often send mini aid checks to families at home.

If illegal aliens would spend half the energy (and money) they use on breaking into America into working to reform the political/economic systems in their home countries, everyone would be better off. Microlending is one strategy.

For the general good of all concerned, I suggested the dependable behavioral shaper of taxation in a 2002 op-ed: Relieve crisis on border with tax on remittances.

Back to the present:

But while the political debate has focused on U.S. immigration enforcement, a key economic factor has been lost in the clamor. Guatemala, El Salvador and Honduras, which are supplying three-quarters of the latest cross-border flood, are bucking a trend in Latin America toward stronger local economies based on sound reforms and security.

Those three Central American countries are dependent on their diaspora to prop up their own woeful economies. Immigrants send back billions of dollars to their families. Remittances have risen to 16.5% of El Salvador’s GDP, 15.7% of Honduras’ and 10% of Guatemala’s, according to World Bank data. Nicaragua, the Dominican Republic and Bolivia rely on remittances for 4.1% to 9.7% of GDP.

But the figure drops precipitously for every other country in Latin America. Mexico, with the largest immigrant population in the U.S. with as many as 13 million people, now relies on remittances for just 2% of GDP.

For Colombia, once a locus of drug-war violence, that has turned itself around, remittances are only 1.1% of GDP. Free-market star Chile’s figure is 0%.

It’s not surprising to see Central American leaders urging the U.S. to let the newest arrivals stay. Those migrants’ remittances offer a lifeline to desperately poor countries. While the money goes to families, it helps the broader economy and ultimately fills government coffers.

A 2008 Pew Research Center survey found that 54% of foreign-born Hispanics send remittances to their home countries, compared to 17% of U.S.-born Hispanics. Undocumented immigrants are believed to send more cash home than either.

Virtually all the cash received by the three remittance outliers is from the U.S. (Guatemala 89%, El Salvador 90%, Honduras 87%).

Meanwhile, Mexico and Colombia, which used to send large numbers of illegal immigrants to the U.S., aren’t part of the current surge. Both have installed major — and sometimes painful — economic reforms and embraced globalization via free trade.

In 2002, Colombia moved aggressively to modernize its economy during the presidency of Alvaro Uribe. His signature achievement was to make the country safe — a crucial start to economic success. In Bogota, he privatized the trash company to get the capital Singapore-clean. Investment laws were improved, including tax-free zones to woo foreign investors. The state oil company was partially privatized. Uribe signed a U.S. free trade deal, though the Democrat-led Senate let it collect dust for years before ratifying it in late 2011.

Uribe can also tout Colombia’s record of zero defaults, its stable democratic tradition and economic growth in every year except 1998. Incomes rose, companies formed and investment rolled in.

In recent years, the nation has worked to improve security, however imperfect. It has used tax reform and sought to rein in powerful unions and even begun to pry open the underperforming state oil monopoly Pemex. The current government also is working to create competition for the nation’s high-priced telecom and cable markets.

As of 2007, Mexico’s illegal emigration to the U.S. began to fall, admittedly in large part due to plunging U.S. construction.

But average Mexican per-capita income crossed the crucial $7,000 threshold as well. Economic conditions have continued to improve, while falling birth rates and a growing middle class curb pressure to get out.

Central America, like Mexico and Colombia, enjoys a free-trade deal with the U.S. But the region suffers from unstable and often leftist governments plagued by drug gangs and other insurgencies.

El Salvador, Guatemala and Honduras should not look to the U.S. for answers — whether amnesty or aid. The region needs to take lessons from their neighbors to fix their own problems with free markets and security.