Remember Vicente Fox? The famous pal of GWB (who now calls Bush the cockiest guy he ever met) and devotee of open borders? The man who was full of anti-America trash talk near the end of his reign?

The former Presidente is now living the good life, in the fashion of a retired servant of the Mexican oligarchy. Yes, he is quite comfy in his deluxe rancho, thanks to his successful political career.

But he made the mistake of displaying the goodies a little too openly and critics are questioning the source of the wealth.

Photos in a Mexican celebrity magazine have opened a window on Vicente Fox's post-presidential life and prompted a public debate about political enrichment in Mexico.The magazine, Quién, published a cover story this month on Fox and former first lady Martha Sahagún at their newly renovated ranch, complete with a pool, artificial lake and expansive gardens.

Mexican newspaper columnists and radio hosts immediately questioned whether the former leader had earned enough as president to afford such luxuries, raising the specter of corruption that had clouded many earlier Mexican administrations.

Pricey architecture, paintings, oriental carpets, wine cellar, swimming pool — the place is a millionaire's palace with a few cattle retained so he can model his collection of cowboy hats. Here's Vicente at work in his "office". 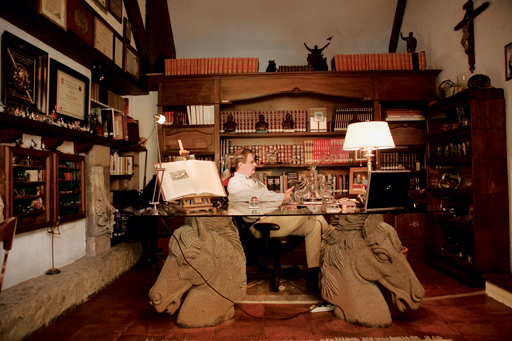 Check out the photo spread for yourself: Quien - Los Fox. (Here's the computer-translated version for some goofy English.)