In six weeks Americans will find out how much their communities are affected by Obamas open borders when schools open and citizens learn that hundreds (or thousands) of diseased, non-English-speaking children have been plopped in local classrooms by the feds.

Only a few towns (like Murrieta CA, Lawrenceville VA and League City TX) have told the government that its flood of illegal alien dumping is not acceptable. 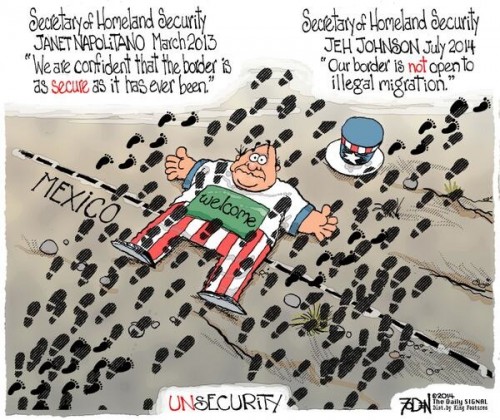 Unfortunately, schools are liberal government institutions that passively accept harmful edicts from on high rather than defend citizens, as resources are moved from American students to foreigners. Spanish-speaking staff will be hired instead of spending on other needs for the citizen kids.

However, average folks have noticed the unfairness of illegal alien kids getting first-class treatment while poor American youngsters are forgotten. Houston mom Bernadette Lancelin spoke out to news reporters about her anger that local kids were being left behind while billions of dollars are earmarked by the administration for illegals welfare.

Will the press ignore American kids being shelved and instead focus on creating sob stories about foreigners and how their diversity presents challenges to school authorities?

The record flood of Central American children crossing the U.S. border is stretching funds and setting off improvisation at public schools.

While politicians spend the summer fighting over how to turn back the tide, school leaders across the country are struggling to absorb a new student population the size of Newark, New Jersey. More than 40,000 children, many of them fresh from violent, harrowing journeys, have been released since October to stateside relatives as courts process their cases.

These kids were homesick and heartbroken, said Robin Hamby, a family specialist for Fairfax County Public Schools in suburban Washington, which began feeling the surge almost as soon as it began three years ago.

Her Virginia district employs more teachers who work with non-English speakers than ever, and wrote a curriculum to reunite children and parents, many of whom havent seen one another in years. Houston is increasing training and translation. Los Angeles nurses are working overtime to screen for emotional trauma created on the journey north.

U.S. authorities have apprehended more than 52,000 lone minors this fiscal year, part of a wave mostly from Honduras, Guatemala and El Salvador. This week, President Barack Obama asked Congress for $3.7 billion to cope with the deluge thats overwhelmed processing centers, shelters where some children stay, courts and social-service agencies.

The Justice Department is changing its policy to give unaccompanied minors and families with children priority in immigration court, which could speed deportations and dissuade others from coming. Most children wont qualify for humanitarian relief and will be deported, said White House Press Secretary Josh Earnest.

A report from the office of the United Nations High Commissioner for Refugees, though, found that 58 percent may qualify for international protection.

Immigration has been a major cause of paralysis in Washington. The Republican Party has been unable to resolve internal divisions over the issue, even as Hispanic voters become a key bloc. Obama, meanwhile, has failed to sway opponents to rewrite laws to manage an undocumented population that has grown to more than 11 million. Republicans blame the second-term Democrat for what they call a porous border and lax enforcement.

The influx of children has intensified the situation. Obama met in Dallas on July 9 with Republican Gov. Rick Perry of Texas and with civic and religious leaders. Before the visit, speculation surrounded whether Perry would make the traditional and symbolic tarmac greeting. He did and a 15-minute meeting ensued aboard the presidential helicopter. The next day, the governor went on national television to criticize Obama for not visiting the border.

For all the political theater, schools are confronting the fallout of the crisis. In farflung cities and towns, a new student population is struggling to adapt to unfamiliar homes and the American education system. All the while, theyre trying to persuade officials to let them stay.

Stories of beatings, rapes or extortion suffered in their home countries, during their travels or in the U.S. are widespread, said Debra Duardo, executive director of student health and human services for the Los Angeles Unified School District. Separation anxiety is common.

Theres no way a child is going to be able to come to school ready and able to learn if we dont address some of the other issues theyre facing, Duardo said. Schools are a safe haven.

Many lack immunizations or documentation proving theyve had them, she said. While heightened demand crowded the main assessment center where checkups are done, moving it was too expensive, she said.

Soon after border agents detain unaccompanied minors, responsibility for their care falls to the U.S. Office of Refugee Resettlement. The agencys involvement ends when it places children with a relative or other sponsor, said a spokesman, Kenneth Wolfe.

That leaves districts like the Houston Independent School District, Texass largest, on their own to estimate how many newcomers theyll receive.

Houston is planning for more this year than last years 910, said Altagracia Guerrero, assistant superintendent of multilingual services. That was nearly double the number it had in 2012, but no one knows how many will show up on the first day of school in August.

Last years influx helped qualify the district for a $1.6 million federal grant. Guerrero, whos part of a team coordinating a district-wide response, said shell hire tutors and outreach workers, and educate employees about the surge so they can help students who are a part of it.

You try to staff as closely to the projection as possible, she said.

Houston has deep experience with Spanish-speakers and sudden influxes of pupils: Hispanics already compose more than 60 percent of its student body, and the district was inundated with children in 2005 after Hurricane Katrina ripped through New Orleans and Mississippi. In Virginia, Fairfax County schools accommodate immigrants and refugees from war-torn countries in the Middle East and Africa. Still, leaders in both places say this crop of students is different.

Having arrived alone, whereas past refugees were more likely to come with family, this group is more vulnerable. Not only do few speak English, some know only indigenous languages for which translators are in short supply. Some are placed with relatives theyve never met, while others havent attended school for years.

Marlon, a 16-year-old Honduran who arrived in the United States alone in February and now lives with relatives in the New Orleans area, said he plans to enroll in school this month. His last name is being withheld because of his age.

I havent learned much here, but know with the school I will learn, he said in Spanish. I think its good to learn English here.

If the judge allows me to stay, I can get a job if I speak English, and opportunity.

The district has newcomer programs in six high schools, where counselors connect families and children to organizations that help navigate legal, housing and foster-care systems.

The U.S. Conference of Catholic Bishops is also offering succor, said Kristyn Peck, who oversees its Department of Childrens Services. The group recently began training teachers in Virginia and Maryland on the inner workings of the juvenile immigration system.

One district was Fairfax, which had 5,192 Central American students in June, a 22 percent increase from 2011. As their ranks swelled, Hamby, the family specialist, fielded calls from teachers and social workers who sensed trouble.

These children were depressed, parents were lost as to why their children didnt listen to them, teachers were dealing with children not just learning English but years below expected grade-slash-achievement level, she said.

Hamby taught staff about the drivers of the exodus: gang violence in Honduras, the collapse of the Guatemalan coffee market. She searched for a curriculum to help parents of newly arriving students, and after finding none, made her own.

Counselors now coach parents on how to connect with their children after years apart, and have them write unwanted feelings on helium balloons and release them into the sky. Hamby said shes applying for grants to fund parent support groups and lobbying for similar help for students.

Hambys motivation stemmed in part from having been a high- school transplant herself: She moved to Fairfax as a junior from Delaware.

I spoke the language, I had supportive parents and I still had a traumatic go of it, she said. Once the kids are here, theyre ours. Were going to do what we can for them.