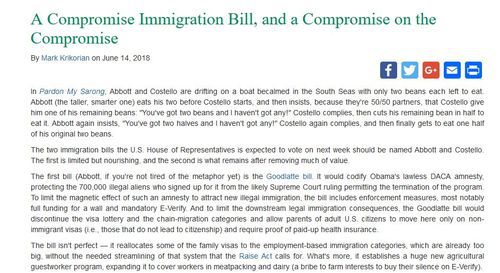 Re: Ann Coulter: A Maniac Is Running Our Foreign Policy (It's Not Trump, It's Judge James Robart)

Even in 2018 CIS’s Mark Krikorian still doesn't understand the courts. In a column on the immigration deal, he writes:

"One thing that would make it a lot more palatable would be restoring the Goodlatte provision to change the way parents of adult citizens can immigrate, so they could come to babysit their grandchildren but never vote or sign up for Medicare."

A Compromise Immigration Bill, and a Compromise on the Compromise By Mark Krikorian , CIS.org June 14, 2018

That would be invalidated immediately by federal district judges around the country, and their orders probably would be affirmed by some or all federal appellate courts. At this moment, the Supreme Court could go either way, but it is only one vote away from replacing the Constitution with the Communist Manifesto. The lobbyists who wrote the Goodlatte bill put in the provision to fool the base. They must be particularly pleased that they also fooled Krikorian. Furthermore, without DNA tests, a large percentage of the "parents" will turn out to be buyers of "parent" entries.