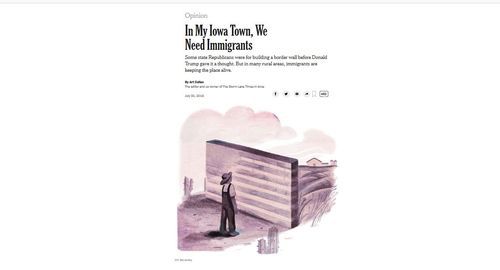 From the NYT Opinion Page:

In My Iowa Town, We Need Immigrants

Some state Republicans were for building a border wall before Donald Trump gave it a thought. But in many rural areas, immigrants are keeping the place alive.

Art Cullen, the editor and co-owner of The Storm Lake Times in Iowa, won the Pulitzer Prize for editorial writing in 2017 and is the author of the forthcoming “Storm Lake: A Chronicle of Change, Resilience, and Hope From a Heartland Newspaper.”

Interestingly, the NYT wrote just last year about the wage-depressing impact of immigration on the major industry in Storm Lake, meatpacking, where inflation-adjusted wages are only 35% of what they were in 1980,

STORM LAKE, Iowa — When Dan Smith first went to work at the pork processing plant in Storm Lake in 1980, pretty much the only way to nab that kind of union job was to have a father, an uncle or a brother already there. The pay, he recalled, was $16 an hour, with benefits — enough to own a home, a couple of cars, a camper and a boat, while your wife stayed home with the children. …

We were just discussing in the comments why in large parts of the country outside the Southeast, it seems like you don’t see boats being towed down the highway today as often as you did a generation ago. Lagertha mentioned that a common sight in rural areas these days is old boats decaying in yards.

The union is long gone, and so are most of the white faces of men who once labored in the broiling heat of the killing floor and the icy chill of the production lines. What hasn’t changed much is Mr. Smith’s hourly wage, which is still about $16 an hour, the same as when he started 37 years ago. Had his wages kept up with inflation, he would be earning about $47 an hour.