National Data | So Immigrants Displace American Workers—But What About The Impact Of Immigrants’ Children?

For 12 years, VDARE.com has waged a lonely struggle to get it through the thick skulls of Main Stream Media commenters (and, more scandalously, professional economists) that the monthly job numbers issued by the federal government must be viewed in the context of renewed mass immigration. Occasionally, it looks like the message is getting through. But no-one at all pays attention to the fact that it’s now nearly fifty years since the 1965 Immigration Act kicked in, and the children of immigrants—who with immigrants are what demographers call the “immigrant stock”—are now also having an impact on the job prospects and wages of the Historic American Nation, the native-born Americans derived from the population already here in 1965. What follows is VDARE.com’s attempt to quantify that impact.

The background: Paul Samuelson, the first American to win a Nobel Prize in economics, wrote shortly before enactment of the 1965 Immigration Act.

After World War I, laws were passed severely limiting immigration. Only a trickle of immigrants has been admitted since then…By keeping supply down, immigration policy tends to keep wages high. Let us underline this basic principle: Limitation in the supply of any grade of labor relative to all other productive factors can be expected to raise its wage rate; an increase in supply will, other things being equal, tend to depress wage rates.

More than fifty years later it is clear that Samuelson was right: The post-1965 immigration surge coincided with increased income inequality and a fall in wages for most American workers. By contrast, the sharp immigration reductions in the 1920s ushered in a forty-year period during which ordinary workers got richer while the rich got relatively poorer.

Harvard economist George Borjas has quantified the wage loss from post 1965 immigration. Among his research findings:

In general, native-born American wages fall as the foreign-born share of the workforce rises.  Borjas’s rule of thumb: each 10% rise the immigrant share of the U.S. working age population reduces the wage of native-born workers by about 3.5%. This relationship implies that the average native-born worker suffered a wage loss of 5.9% in 2012—a year in which 16.8% of the population ages 18 to 64 was foreign-born, according to a Pew Research report. In dollars, this translates to a $2,600 wage loss suffered by the average native-born worker - money that would have been theirs but for the presence of foreign born competitors in the workforce.

But what about the impact of second generation immigrants—U.S. born persons with at least one immigrant parent? They accounted for 8 per cent of the total working age population in 2012, according to the same Pew Research Center study. At 15.5 million, they were nearly half as large as the foreign-born population itself.

Pew Research projects that by 2050 41.4% of the U.S. working age population will be of “immigrant stock,” i.e., immigrants or children of immigrants. This will be the highest immigrant stock share in modern history. 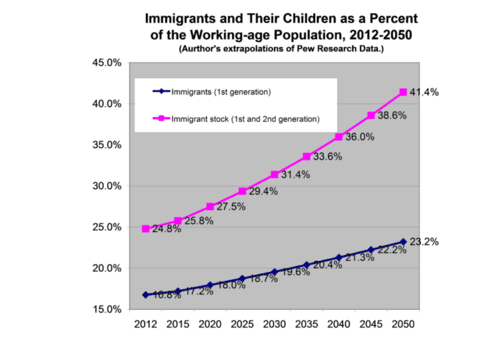 The long-term effects of immigration on American society may well depend less on the foreign-born than on their U.S.-born children. This from a research journal article on second-generation assimilation:

First generation immigrants have always been a flighty bunch, here today and gone tomorrow, in the society, but not yet of it. By contrast, their U.S.-born and reared children are, overwhelmingly, here to stay and, as citizens, fully entitled to ‘voice’ in the American political system…. Hence, the course of their adaptation will determine, to a greater extent than other factors, the long-term destiny of the ethnic groups spawned by today’s immigration. [The Adaptation of the Immigrant Second Generation in America: Theoretical Overview and Recent Evidence, Journal of Ethnic and Migration Studies, August 2009]

In no way, however, do these factoids support the assimilationist narrative of upward mobility between immigrant parents and their children. That is because many second generation are still not the children of today's immigrants; many are the children of pre-1965 immigrants, now deceased. This explains why whites currently account for 46% of second generation adults and only 20% of the first, while Hispanics are 47% of the first and 35% of the second.

A true comparison of, say, household income between first and second generations would show today’s second generation income alongside that of their parents at a similar stage in life. Pew researchers claim such data is not available to them.

Equally important, the second generation advance reported by Pew may reflect gains made by a very different type of immigrant: Asians. This may have effectively masked continued deterioration among second-generation Hispanics. I present evidence for this in an article on California in which I reported “…. a widening gap in the academic, economic, and linguistic achievement of second- and even third- generation Latinos and the overall population.”

VDARE.com Editor Peter Brimelow’s 1995 book Alien Nation was subtitled Common Sense About America’s Immigration Disaster. This analysis demonstrates that the post-1965 influx has been even more of a disaster for American workers than is generally realized.