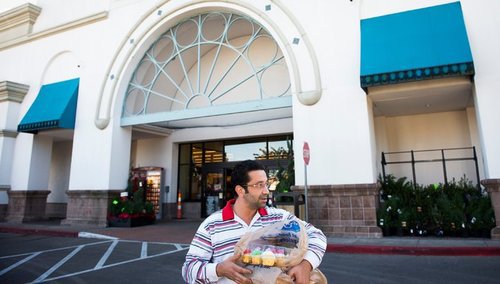 Kamal Is NEW YORK TIMES' Featured Syrian Refugee Of The Week! (Forget About Woman Lynched On Suspicion Of Koran-Burning)

On Christmas Day—three weeks after the son of a Pakistani immigrant and his Pakistani immigrant bride murdered 14 people in San Bernardino, California—The New York Times told the heartwarming story of "Kamal," a Syrian refugee who resettled into Houston, Texas, earlier this year and immediately started shopping at Walmart.

The NYT considers it tacky when actual Americans go to Walmart, but Muslim immigrants seem to live there, buying nothing but American flags and Christmas trees.

Thus, we're told Kamal has an outdoor Christmas tree from Walmart, and we find him carrying two trays of cupcakes from Kroger's for his children's elementary school holiday party.

Kamal—like the NYT—was "angered" by Texans' reluctance to accept more Syrian refugees. He says of Americans: "Why did you bring me here and why then you let the people hate us?"

We brought you here, Kamal, because the Democrats need voters and the rich need cheap servants.

As for letting "the people" hate refugees, they don't, but if they did they'd have a right to do so. It goes back to that whole thing with John Locke, John Milton and the English Bill of Rights in 1689. (Of course, in Syria, it's always the year 400, so this is merely pedagogical.)

The reasons Americans might hate Muslims—although, again, they don't—include: San Bernardino, the Boston Marathon, Fort Hood, the Chattanooga military recruiting center, 9/11 and the 1993 World Trade Center attacks, and on and on and on.

The NYT article itself provides additional clues as to why Texans might not want more Syrian refugees.

According to the NYT:

But he's baffled that Texans are not yelping with joy at the prospect of bringing another 100,000 Syrians here. Why would any country not jump at the chance to admit masses of people who administer electric shocks and remove organs as punishment for protesting the government? We must be crazy!

If anyone hates Syrians, it's Kamal. He left his home to get 7,000 miles away from Syrians—whom he now wants to bring to the U.S.

By contrast, these are the horrors Kamal has suffered at the hands of Texans, which he shared with the NYT: The Texas agriculture commissioner posted pictures of refugees and rattlesnakes on Facebook with the caption: "Can you tell me which of these rattlers won't bite you?"

Well, can you? Kamal can't. He voted with his feet by getting the hell out of his entire country, which—again—he now wants to import to Texas, at least according to the NYT.

I'm going to give Kamal the benefit of the doubt. (The guy does have a Christmas tree.) Maybe it's the Ramadan spirit, but I don't think he does want any more Syrian refugees. Maybe Kamal is only worried about Texans suspecting him, in which case, he ought to be "angered" by the Muslim immigrants who do things that create suspicion, and the U.S. government that insists on bringing in hundreds of thousands more like them.

Only in fiscal years 2009 to 2013, the Obama administration has imported 680,000 immigrants from Muslim-majority countries. In that same time period, the government accepted approximately 12 immigrants from the British Isles.

The media's persistent attempts to paint sympathetic portraits of the Third-Worlders pouring into America are always exercises in self-contradiction.

On one hand, the NYT loves to provide lavishly detailed accounts of the atrocities committed on a daily basis in backward countries in order to pull at readers' heartstrings. But then they're shocked when readers don't respond to descriptions of these medieval cultures by saying, What this country needs is more electric shock torture and organ harvesting of prisoners. How about we bring in some more Syrians?

The day after the NYT' story about Kamal and his trays of cupcakes and rafts of grievances, the paper ran a front-page story about the "flawed justice"—that was in the title—involving a homicidal mob in Afghanistan.

First, the good news: No police officers shot any unarmed black teens. Now, the bad news: A 27-year-old woman, Farkhunda Malikzada, was beaten to death by an enraged mob in Kabul after being falsely accused of burning a Koran.

"In the videos, Farkhunda seems at first to be screaming in pain from the kicks, but then her body convulses under the blows, and soon she stops moving at all. Even when the mob pulls her into the street and gets a car to run over her, and she is dragged 300 feet, the police stand by.

"By then, she was little more than a clothed mass of blood and bones. Yet still more people came to beat her. One of the most fervent was a young man, Mohammad Yaqoub, who worked at an eyeglasses shop. He heard the crowd as Farkhunda was dragged behind the car and rushed out, eager to join."

Now, the mob killing of Farkhunda Malikzada is testing Western efforts to instill rule of law in Afghanistan https://t.co/f9y3ssWx3S

Let's get Yaqoub here. He can work at LensCrafters!

But the NYT is scratching its head, incredulous that Americans aren't leaping with ecstasy at the government's plan to continue dumping these sick, sadistic cultures on us.