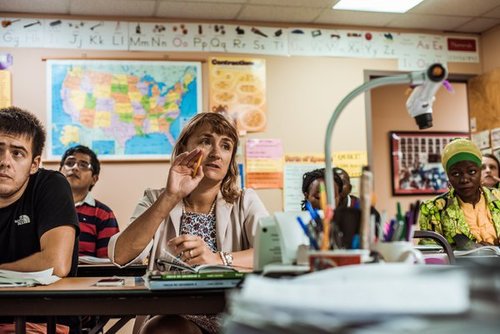 Saturday’s New York Times had another of its predictable open-borders items on the front page, where it bashed Americans for being fearful of potentially dangerous foreigners being dumped in their communities by Washington.

Apparently, citizens don’t trust the government to protect them from enemies. Should anyone be surprised about that attitude, given the numerous jihadist murders and dozens of thwarted attacks in recent years?

But the paper did include a surprising fragment of truth in the second paragraph — a mention of hijrah by a local citizen in a South Carolina audience. Was it meant to suggest that Americans out in the sticks are paranoid hicks? The reporter did note the presence of the John Birch Society in the first paragraph in order to set the desired tone of liberal dismay to be felt by the reader.

Still, a curious reader who had never heard of hijrah before might Google it up and find a range of references, such as the wikipedia historical explanation of Mohammed’s flight to Mecca, the original hijrah. More helpfully, the reader might see Robert Spencer’s article, The Hijrah into Europe: “Refugees” Colonize a Continent or the Amazon listing of Ann Corcoran’s book Refugee Resettlement and the Hijra to America.

For a timely definition of hijrah, Spencer lays it down in his afore-mentioned article:

Hijrah, or jihad by emigration, is, according to Islamic tradition, the migration or journey of Muhammad and his followers from Mecca to Yathrib, later renamed by him to Medina, in the year 622 CE. It was after the hijrah that Muhammad for the first time became not just a preacher of religious ideas, but a political and military leader. That was what occasioned his new “revelations” exhorting his followers to commit violence against unbelievers. Significantly, the Islamic calendar counts the hijrah, not Muhammad’s birth or the occasion of his first “revelation,” as the beginning of Islam, implying that Islam is not fully itself without a political and military component.

To emigrate in the cause of Allah – that is, to move to a new land in order to bring Islam there, is considered in Islam to be a highly meritorious act. “And whoever emigrates for the cause of Allah will find on the earth many locations and abundance,” says the Qur’an. “And whoever leaves his home as an emigrant to Allah and His Messenger and then death overtakes him, his reward has already become incumbent upon Allah. And Allah is ever Forgiving and Merciful.” (4:100) The exalted status of such emigrants led a British jihad group that won notoriety (and a shutdown by the government) a few years ago for celebrating 9/11 to call itself Al-Muhajiroun: The Emigrants.

It is clear that immigration and the refugee program are being used as weapons against the United States and the West generally. Change the population and you’ve changed the culture: it’s not the same country any more. Democrats want more Mexicans because they agree with the liberals’ philosophy of big government and less freedom. Look at what’s happened to California in a few decades: it’s gone from dependably Republican to totally Democrat. That’s the D-plan for all of America. 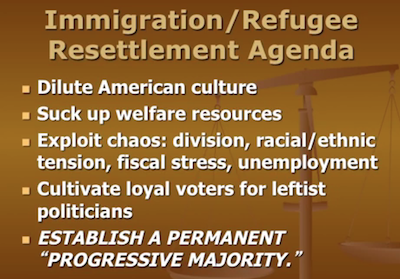 Here’s the text of the Times piece with its curious mention of hijrah that might have provided more edification than was intended.

DUNCAN, S.C. — The worried citizens gathered in the high school cafeteria, about 200 strong. Patriotic songs played on the stereo, a man in a blue blazer from the John Birch Society hovered by a well-stocked literature table, and Lauren L. Martel, a lawyer from Hilton Head, told the crowd that 25 Syrian refugees were already living among them.

“The U.N. calls it ‘refugee resettlement’ — the Muslims call it hijra, migration,” said another speaker, Jim McMillan, a local businessman. “They don’t plan to assimilate, they don’t plan to take on our culture. They plan to change the way of American life.”

The United States government has pledged to increase the number of worldwide refugees allowed in the country each year from 70,000 to 100,000 by the year 2017; earlier this month, the Obama administration said it would take in at least 10,000 Syrian refugees over the next year. But the anger and anxiety here show just how hard this might be in some parts of the country.

None of Syria’s four million refugees have been resettled in this part of South Carolina in the last year, according to the State Department. Since May, a Christian nonprofit group, World Relief, has placed 32 refugees in the region, but most of them were Christians fleeing troubled countries like Myanmar and the Democratic Republic of Congo.

Even so, in South Carolina’s Upstate region, as its conservative northwest corner is known, the crisis has divided those who want to welcome new waves of huddled masses from those who question the federal government’s ability to weed out Muslim extremists. Some critics, echoing concerns in towns across the country, fear the newcomers will burden local government agencies or alter the character of their communities.

The criticism here has encompassed both sober-minded questions about local school funding and warnings about global conspiracies. It began this spring when the Baltimore-based World Relief, one of nine nonprofit agencies that work with the federal government to resettle refugees, prepared to open its new office in Spartanburg, a city of 37,000 close to a major BMW auto plant.

Lynn Isler, a stay-at-home mother, was among those who pushed back. She created a short-lived Facebook page that warned of the “perfect storm that the Syrian refugees will bring.” She has also warned that Communists had infiltrated some elements of the Christian Evangelical movement that supports refugee resettlement.

Elected officials have weighed in as well. Representative Trey Gowdy, a Republican whose district is part of the Upstate region and who leads the House select committee investigating the attack on the American diplomatic compound in Benghazi, Libya, has complained that the federal government did not sufficiently coordinate with local officials before allowing the current crop of refugees to arrive.

State Senator Lee Bright, who represents Greenville and Spartanburg Counties, has called for “open hearings” on the resettlement effort, echoing the concerns of some fellow Republicans who say it is difficult to perform background checks on Syrian refugees, given the chaos that has engulfed their country. Many critics point to the congressional testimony of Michael Steinbach, assistant director of counterterrorism for the F.B.I., who told a House committee in February that Syria lacked systems that could provide information to evaluate refugees.

At the meeting in the cafeteria Sunday evening at James F. Byrnes High School in Duncan, a small city near Spartanburg, State Representative Mike Burns, a Republican from Greenville County, spoke more broadly of immigration policies that were threatening traditional American culture.

“This immigration fiasco that we’re in the middle of is going to take away the very things that we’re dear about,” Mr. Burns said.

Evan Mulch, the field coordinator for the John Birch Society, the right-wing group, told the crowd the resettlements were “part of the New World Order game plan.” Another speaker worried that the refugees would stress the state’s already stretched Social Services Department.

The United States, Ms. Martel said, is “a Judeo-Christian nation.”

“We are not a Muslim nation, and those two things cannot coexist,” she added.

“Do we shoot them?” he asked, to laughter and applause. “Come on! I mean, this is crazy.”

Jason Lee, 41, a Southern Baptist preacher who is the director of World Relief’s Spartanburg office, said he had been surprised by the vehement resistance. In the mid-2000s, when he helped Somali refugees adjust to new lives in Kentucky, there were very few local complaints.

The situation here has been troubling enough that Anne C. Richard, the assistant secretary of state for population, refugees and migration, traveled to the Spartanburg area in late August to meet with skeptics and to try to correct what she called “misinformation” about the local program.

In a telephone interview on Tuesday, Ms. Richard said that the concern about bringing in “bad actors” from the Middle East had some merit. She alluded to the case of two Iraqi refugees who settled in Bowling Green, Ky., and were charged in 2011 with trying to send weapons and money to a Qaeda affiliate in Iraq.

But she said that screening procedures had improved since then. She also said that the vast majority of the three million refugees brought to the United States since 1975 — including 19,000 Iraqis who were resettled in the 2014 fiscal year — have integrated peacefully. (The United States has taken in about 1,500 refugees from Syria since the start of the conflict there more than four years ago.)

Ms. Richard said many Americans had long supported refugee resettlement programs. “It’s an American tradition, and a lot of Americans get that,” she said. In many parts of the country, including South Carolina, the Syrian crisis has elicited calls for compassion and offers of help: On Sept. 13, hundreds of people gathered in University City, a suburb of St. Louis, to ask the federal government to accept “as many Syrian refugees as possible” in the area, according to the St. Louis chapter of the Council on American-Islamic Relations.

This week, the mayors of 18 American cities, including Bill de Blasio of New York and Eric Garcetti of Los Angeles, sent a letter to President Obama urging him “to increase still further the number of Syrian refugees the United States will accept for resettlement.” The mayors asserted that the United States had a “robust screening and background check” system in place for refugees, who, they said, “have helped build our economies, enliven our arts and culture, and enrich our neighborhoods.”

But even before the Syrian crisis dominated headlines worldwide, resettlement agencies had noted a rise in anti-refugee sentiment in parts of the United States, said Melanie Nezer, vice president of policy and advocacy at HIAS, a Jewish nonprofit that works with refugees. In the last two decades, they have increasingly placed people in smaller communities to try to avoid the high cost of living in traditional immigrant magnets like New York and Los Angeles. At the same time, unemployment and tight budgets have prompted some local governments to fight the placement of refugees.

In South Carolina, a number of influential Upstate religious leaders have embraced the refugee program. The Rev. D.J. Horton, senior pastor of Anderson Mill Road Baptist Church, said dozens from his flock of 2,300 had already completed refugee support training. “It’s very hard to read your Bible, especially your New Testament, and refuse refuge to people who are vulnerable,” he said.

Mr. Lee said World Relief has proposed to the State Department resettling as many as 116 refugees in the Upstate region in the next year. He did not rule out the possibility that Syrians might be resettled in the area in the future. For now, he said, his group had resettled just one Muslim family of four, from Iraq, and a former Iraqi translator for United States security companies who has renounced his religion.

The former translator met with a reporter on Monday and asked that his name not be used, for fear of attracting attention from anti-refugee activists. He said his reception in the United States had been warm, but he had been careful not to mention he is an Iraqi: Among Americans, he said, “Suicider, killer — this is the stereotype of Iraq.”