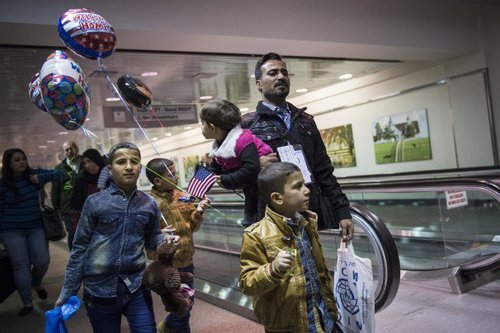 A wary start to Syrian refugees’ new life in Kentucky

LOUISVILLE —America’s newest family of Syrian refugees flew in late at night, and Sarhan Aldobai, 36, looked down from the plane at the distant lights of his new home. His wife was nursing their baby in the next seat. His five other children had fallen asleep. …

They were flying over the United States, where polls showed that a majority of residents said they didn’t want more Syrian refugees. They descended into Kentucky, where the new governor had vowed to block arrivals because of “risks to our citizens.” …

His oldest daughter was carrying an American flag she’d been given during a pre-departure cultural orientation for refugees. They had been taught that Americans believed in wearing seat belts, that girls and boys attended school together, and that recent terrorist attacks in Paris and California had caused a backlash against Muslims. They’d been told about Donald Trump, and how his supporters talked of shutting down mosques, banning Arabic and creating a government registry of Muslims. These were some of the things Sarhan knew about the United States.

What the United States knew about him was collected in his refugee case file. “Reason for resettlement: Physical protection needs.” “U.S. ties: none.” “Prior occupation: Shepherd.” “English ability: Reads none, writes none, speaks none.” “FBI screening: Cleared.” “Department of Homeland Security: Approved.” …

He said nothing at baggage claim while the church congregants grabbed the family’s suitcases and carried them out to an awaiting van. He had no idea where the van was taking them. He didn’t know where they would live, or if he would find work, or whether anyone needed an experienced shepherd in Louisville.

My impression has been that Louisville isn’t particularly sheep-intensive. I Googled “Louisville” to check this, and found this to be the top news out of Louisville today:

As many as 2,000 people, mostly juveniles, caused multiple disturbances and fights at the Mall St. Matthews Saturday evening, prompting police from four agencies to respond and forcing the shopping center to close early, police said.

St. Matthews Police Department spokesman Officer Dennis McDonald said officers assigned to patrol the mall got a call around 7 p.m. of a fight breaking out inside the complex. That fight led to another, and soon, McDonald said, “the disturbances fed off each other.”

Eventually, officers from three additional agencies – Jeffersontown and Louisville Metro police, as well as the Jefferson County Sheriff’s Department – were called to help get the situation under control. The LMPD air unit’s helicopter was also called for assistance.

Mall management made the decision to close the facility around 8 p.m., McDonald said. That prompted the fights and unruly conduct to spill out into the mall parking lot, onto Shelbyville Road, Bowling Boulevard and adjacent streets and into neighboring businesses including the Whole Foods parking lot and several restaurants across Shelbyville Road, he said. The action in the streets also slowed traffic in the area. …

McDonald said that no arrests had been made by late Saturday, mainly due to all the officers having to deal with so many “hot spots” or places where fights were occurring. He added that a majority of those involved were between the ages of “15 and 19 years old” – though he said some juveniles involved were as young as middle school-aged children – and called the night’s events “troubling”, adding that authorities believe a majority of those involved were either dropped off or took public transportation to get to the mall.

While McDonald said that authorities believe that the disturbances kept increasing due to the juveniles’ use of social media, they do not believe the entire incident was coordinated.

I get the feeling this won’t work out well.